Share All sharing options for: Lucasfilm Games vets look back on the earliest days of George Lucas' game company

Some of the first employees at Lucasfilm Games — the studio that later became LucasArts — looked back at the creation of George Lucas' game company during a classic postmortem at this week's Game Developers Conference, reflecting on the freedom and constraints imposed by working for the people that created Star Wars.

Langston, a programmer who wrote his first game in 1965, said he was one of a handful of game makers approached by Lucasfilm when the company was growing due to the success of Star Wars and The Empire Strikes Back.

"In April 1982, I got a call from George Lucas' people, asking if I'd be interested in starting a new enterprise for him outside the film business," Langston said. "The background for that is that in the movie business, you spend a lot of money for three or four years and then [when the movie is released], over a two week period, millions and millions of dollars come flooding in and then goes right back out as tax, unless you find a use for them that would be a good expense.

"George really invested in the business. When the proceeds from Empire Strikes Back came in, he formed the computer division, out of which later came things like Pixar, Sonic Solutions, EditDroid.... When Return of the Jedi came, he needed to expand further..."

"because of the environment we set up, we ended up doing things no games had done before"

Langston said, in establishing the direction of Lucasfilm Games, that he "wanted to create an environment that specifically encouraged creativity instead of just hitting marketing deadlines." He said he tried to manage the forming studio as "a group of peers" so that when a developer came to him with an idea "and I told him 'Oh, that will never work,' he was in a perfect position to ignore me, and go ahead and put that [idea] in the game ... and end up being one of the most memorable parts of the game."

The games group brought in a million dollars during its first year, Langston said, despite not shipping any games.

"We didn't actually make any products the first year, we made tools," he said. "That worked out really well for us. To test the tools, we made two throwaway games, in part because of the environment we set up, we ended up doing things no games had done before."

The "throwaway games" featured music created and played on-the-fly, he said, and "anti-aliased graphics being generated in real-time on a 6502 processor."

Those games ultimately were two of Lucasfilm Games' first: Ballblazer and Rescue on Fractalus.

The second developer hired at Lucasfilm Games was David Fox, who said he joined for a specific reason that wound up being a source of disappointment. "I wanted [Rescue on Fractalus] to be a Star Wars game originally," he said, "and we were told upfront [that] we were not allowed to do Star Wars titles. I was really upset.

"I joined the company because I wanted to be in Star Wars and [making games] was how I wanted to do it." 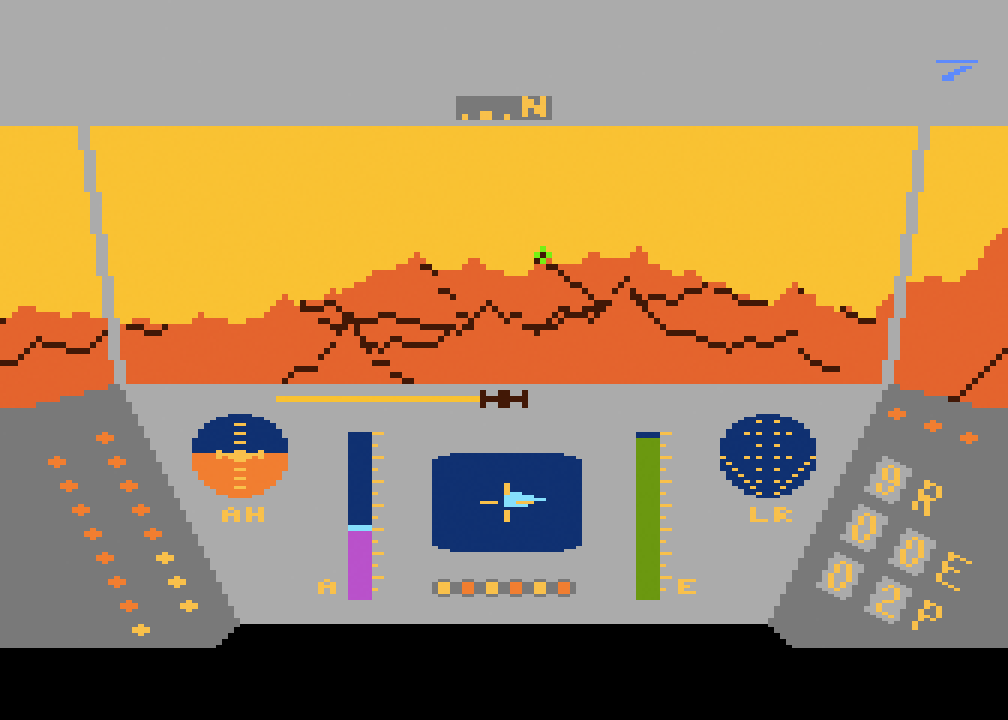 While some developers at Lucasfilm Games were disappointed that they couldn't exploit the Star Wars and Indiana Jones properties during the early days, others saw it as a boon to the studio.

"We weren't allowed to touch any Lucasfilm properties initially, which the company viewed as money in the bank," said Chip Morningstar, brought on as a tools programmer. "They could license that out [to other developers] and we were forced by ourselves to do our own creative stuff. All these other really creative, capable people at Lucasfilm were forced to march to George's decisions."

"We were creating a culture that was designed around innovation," said Steve Arnold, who came from Atari to help manage the games group. "I think David [Fox] and I agree; though he was disappointed with it in the beginning, one of the greatest strengths we had was we were not working on Star Wars. We had the brand and the credibility and the franchise of Star Wars but we didn't have to play in that universe. We were a group that lived inside a super creative, technologically-astute company and we got to do our own creations.

"We were probably the only group outside of George in the company that got to make up new stories, and call them Lucasfilm. That gave us a fair amount of freedom and flexibility... but also challenge. I would argue that helped us."

"I met a George Lucas without a beard... I felt ripped off."

"I was conscious at the time that this was a boon to us," Langston said. "We could watch what Atari was doing with licensed things and say 'this isn't good enough,' but we didn't have to do that work ourselves."

Arnold said that in his first meeting with George Lucas, the filmmaker told him "Stay small, be the best, and don't lose any money."

"That was an incredibly liberating mandate," Arnold said. "He gave us permission — and we didn't stay completely small, but we did stay small for a while — [to think] 'How could we take the franchise that people were associating with George and film, and apply it to this interactive world?' We invented lots of different things because we had permission to do that."

Ron Gilbert recalls his first interaction with George Lucas as memorable, but for very different reasons.

"It was right after the 10th anniversary of Star Wars and George and Steven Spielberg had shaved off their beards so they could sneak into a showing of [the movie]," he said. "I met a George Lucas without a beard... I felt ripped off. That will stick with me."

Despite having permission to create and innovate as they wished, manager Steve Arnold pushed the team to focus on games that audiences would enjoy, not just the developers making them. Arnold pressed designers to up their "fun-itivity quotient," the team's way of saying a game was "fun."

"What Steve was getting us to do was think about what is now thought of metrics," Falstein said. "At the time, even thinking 'Would this be fun?' was slightly radical. It was more a matter of 'Hey, am I having fun making this?' and throwing it out there and seeing what happens."

"we were just too stupid to know it couldn't be done"

While Lucasfilm Games was described as "extraordinarily collaborative" and "radically egalitarian" by its founders and a place where designers and programmers could invent and innovate, it didn't have big budgets to work with early on.

"One of the principles was we never did anything with the company's own money," Morningstar said. "We had to get someone else to pay for it." But the games group had an advantage in finding that money: the allure of Star Wars.

"People would come to us just wanting to bask in the reflective glory of Star Wars," he said. "Companies would be coming to us all the time. People in the group would come up with ideas ... and Steve would keep a file of this stuff, and when a company would come wandering through and Steve would pull a couple ideas out and see if they could sell them on kicking us some money to develop it."

That's how Lucasfilm Games got involved in developing Habitat, an early online role-playing game, for Quantum Link. The Commodore 64 game went into beta test, but was never commercially released. But Habitat was a feather in the cap of Lucasfilm Games, which promoted the game's innovative online structure in internal Lucasfilm meetings. Fahlstein recalled how those meetings typically went for the team.

"We would get all of Lucasfilm together once a year ... where each of the division's shows what they've been up to in the last year," Fahlstein said. "Invariably, [Industrial Light and Magic] would go before us and show the best five minutes of all their special effects they'd done for the biggest blockbusters — full screen — and then we would project our stuff on-screen ... all of our little jaggies, and it was kind of humiliating at the time.

"But we were interactive and we were also able to show people a little glimpse of the future." 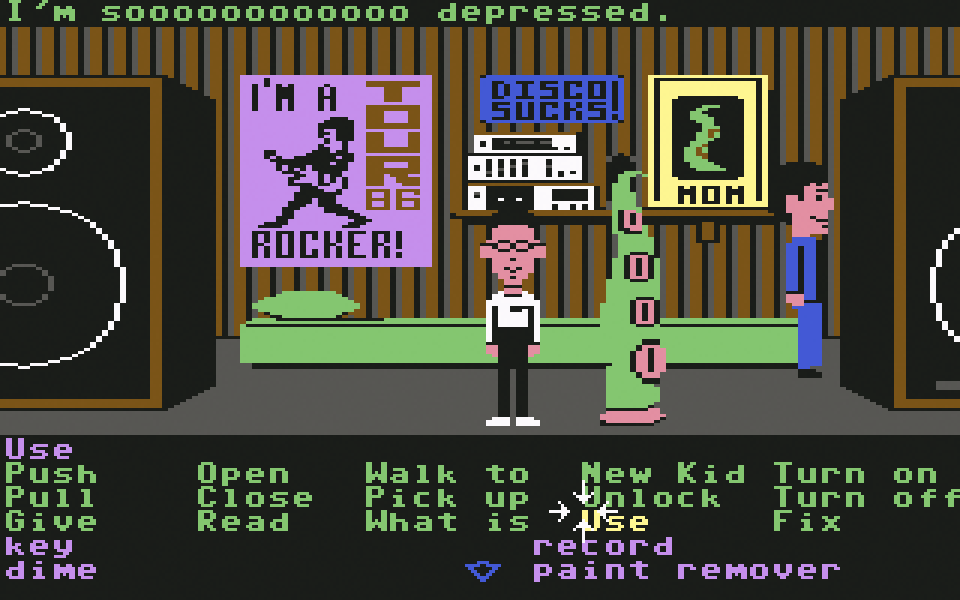 Ron Gilbert recalled another innovation at Lucasfilm Games that had lasting effects: the development of the SCUMM engine that powered a number of adventure games.

Development of Maniac Mansion, Gilbert said, "was going nowhere, because I was trying to code the whole thing in assembly."

"Steve called me into his office to talk about the state of the game, because it was not going anywhere," Gilbert said. "I think this is the point that David Fox was brought on ... because Steve felt the project needed an adult. Chip had suggested [that we write a] scripting language, build a compiler and interpreter. All of this seemed crazy to me to write this on a Commodore 64.

"I think Chip wrote the compiler over lunch... which was very impressive."

From that, SCUMM was born, going on to power games like Maniac Mansion, The Secret of Monkey Island, Indiana Jones and the Fate of Atlantis and more.

"I think it was that environment we had, which was very collaborative," Gilbert said. "There wasn't this fear of failure on some level and it really allowed you to go off and do really different things. A lot of the stuff we did, we were just too stupid to know it couldn't be done..."