Cloud Chamber: How do you tell a story with networked computers?

Share All sharing options for: Cloud Chamber: How do you tell a story with networked computers?

How do you tell a story with networked computers?

Christian Fonnesbech describes this question as a personal obsession stemming from as far back as 1999 in his career. The game designer, who works as creative director at Danish studio Investigate North, is looking for a new way of telling stories using elements that are specifically characteristic of the Internet age.

The result is Cloud Chamber, a transmedia project launching on Steam that combines alternate reality gaming, film, mystery puzzles and a cast with acting resumes ranging from roles in James Bond to Game of Thrones. The game, says Fonnesbech, "really comes out of the fact that I've been in love with the idea of the Internet and computers as a whole new way of telling stories, as a new kind of medium."

"There should be a specific type of story coming out of the networked computer revolution."

"The Internet changes what computers do by connecting them," he tells us. Fonnesbech, who has spent 10 years and 35 projects experimenting with storytelling through modern technology says his career has been spent trying to find a solution to the question of how to transform the Internet into a narrative platform.

"Look at the Internet," he says. "It is games, yes, but it is also social networking, and film, and search, and a lot of other stuff. So I really tried to find out what the foundations could be — to take these things and make a new way of telling stories. Cloud Chamber is the result of that. 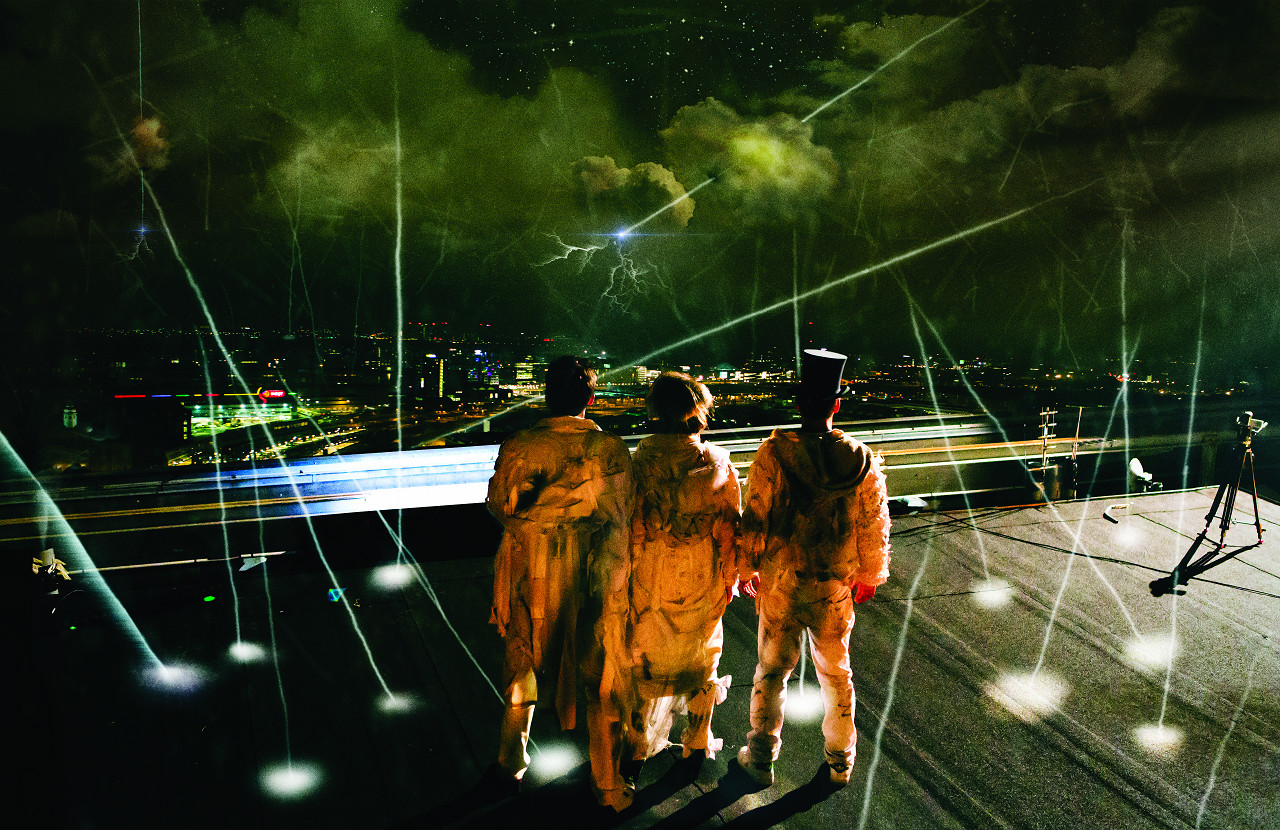 Cloud Chamber is the first entertainment-driven project from Fonnesbech, whose previous work was made as marketing pieces for other clients. The title is influenced by a range of experimental narratives, from Orson Welles' famous War of the Worlds radio hoax which aimed to convince listeners that aliens had in fact appeared, to the extensive online advertising campaign used prior to the release of the situationist horror film The Blair Witch Project.

Likewise, Cloud Chamber blurs the line between fiction and reality. It tells the story of Fonnesbech's childhood, having grown up in a family of scientists who adopted the "very particular world view that some scientists have."

Fonnesbech's parents were biologists, and as a result he says he grew up without religion.

"There is no religion in biology," he explains. "Biology is the least religious profession in the world! And for Cloud Chamber, I was able to take the opportunity to research astrophysics, and work with astrophysicists, and just spend some time trying to work out where it is we come from — and if there's a chance there is anyone else out there. I spent three years researching astrophysics for Cloud Chamber."

Fonnesbech describes the project as a way of reconciling being brought up without any sense of God, and instead with a purely scientific world view. The development studio teamed up the European Space Agency to implement documentary footage from Space in order to help realize the illusion of an alternate reality while continuing to blur the lines between objective truth and fiction. 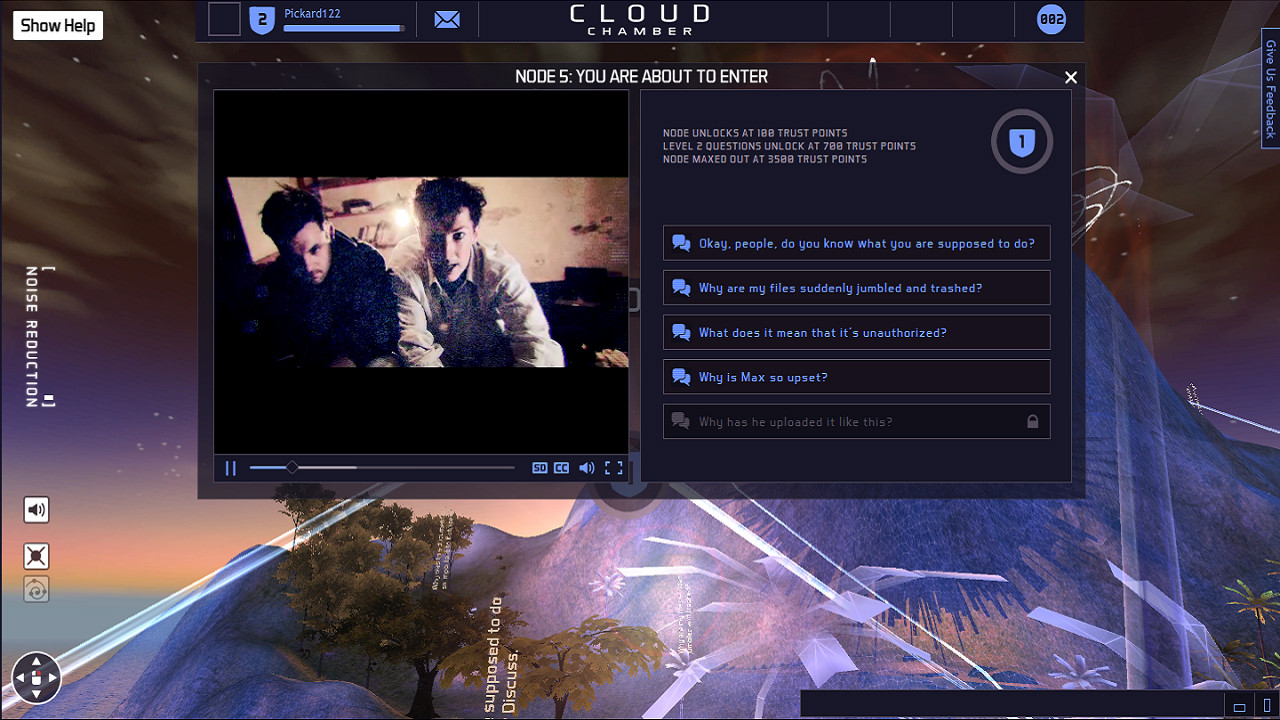 Throughout the game, players are encouraged to discuss this documentary material which points to a mysterious signak out in Space.

Those who play Cloud Chamber enter a kind of three-dimensional Wikileaks; A huge database of confidential media files featuring a fictional system called "Crowdscape" which creates 3D visualizations of the data. The more important the data, says Fonnesbech, the higher the mountain is in the data landscape.

Players navigate this landscape, undercovering media files made up of private journals, emails, maps, astrophotography and found footage shot by the team behind the Danish murder mystery The Killing. As players progress, the story is slowly pieced together.

From Orson Welles to Dear Esther and Gone Home

Fonnesbech likens the project to story exploration games like Dear Esther and Gone Home, "where the main gameplay is putting fragments of story together in your head from different timelines and so on," he explains. "But the new thing here is that discussion is the main game mechanic. So with each media file, you enter a discussion forum, or a number of forums, where players discuss what's going on: 'What happened? Is she lying? Is there something else going on? What could this Signal be?' and so on. And that's what you're rewarded for — socially interacting with other people while investigating a mystery."

Here, the main gameplay is interacting with other people, liking what they post and discussing with them. The result says Fonnesbech, is a level of narrative interaction that simply isn't offered in other story-based media.

"Film is an industrial artform that was made on the foundation of electricity, chemistry, fine mechanics," says Fonnesbech. "What I am looking for is an information age artform, a narrative form for the Information Age."

"Because what's actually — for me, at least — been proven is that the way we tell stories has to reflect the way we live our lives. Sitting in a dark room with 500 people staring at a screen may have been a valid way of telling emotional stories in the industrial age, but that's not how we live our lives now. We're constantly interacting, texting, skipping between media types, and so on. I really want a narrative form that reflects the way we live.