Allowing players to build highly customized avatars to their personal liking is becoming a staple of many big franchises; massively multiplayer online role-playing games have already been doing it for years, and doing it well. But Bungie is taking character creation to a whole new level for its next game, offering an ambitious number of skins, armor, weapons and other items for players to work with.

In a panel at GDC this morning, Bungie technical art lead Scott Shepherd discussed the work going into Destiny's extensive character creation system. Characters' bodies are broken into four "slots": the head, chest, arms and legs. Throughout Destiny, players will be able to collect new pieces that can be equipped into these slots. Shepherd said the development team is working to create a balance of power and aestheticism with these pieces, making them both functional and vital to gameplay progression but also visually appealing to players.

Shepherd detailed the basic design aesthetics Bungie is using for Destiny's three classes, the Hunter, Warlock and Titan. The Hunter class is meant to look like they scavenge the wilderness for gear, with capes torn to scraps and gear based off hazmat suits and gas masks. The Warlock class, the "warrior-scholars," wear cloaks and robes with hardware tucked underneath. Inspiration for their outfits was drawn from a wide range of sources, from wizards to World War I soldiers. The Titan class is the most heavily armored of the three classes, with gear inspired by medieval armor layered over tight-fitting suits.

Bungie crafted pieces that could be used over and over within multiple armor sets. Shepherd said Destiny is a franchise Bungie wants to grow over the next decade, so the desire for longevity meant the customization system needed to be tailored to remain accessible for years. As players pick up gear, they need to be able to keep and use that gear as the game grows in the coming years. 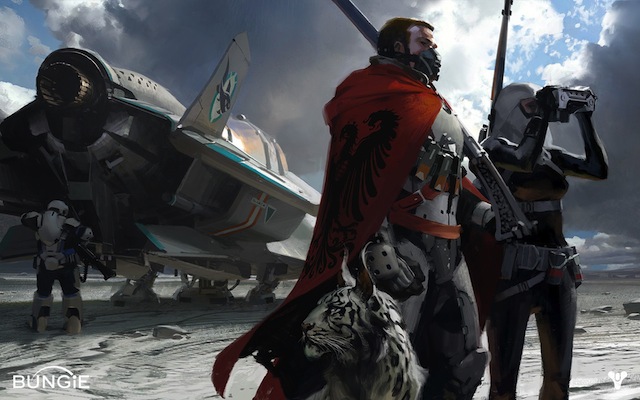 Shepherd said developers really began digging into the customization system once they began thinking of characters less like whole people and more like a set of legos, pieces that could be built up over time according to players' desires. He introduced Mash Up, Bungie's internal character customization program that remixes bits and pieces of armor and gear into complete items players can equip. Shepherd's demonstration of the system showed an artist using Mash Up to build a helmet, placing the visor, sides and other pieces in a myriad of different ways — many helmet iterations are possible from the same cluster of item bits.

Bungie created several color palettes for each of the three classes, with gear changing both shape and color the more advanced the pieces become. The team also made tools that would automatically help alter bits for the female physique, eliminating the need for programmers to "massage the geometry" manually every time a costume piece needed to be made for a woman. These tools help developers efficiently create parts for both male and female characters at an accelerated pace and ensure that items like chest pieces and pants fit and look the way they should on both avatar genders.

Bungie is continuing to iterate on the customization system as the game approaches launch this fall. One new feature will be an extensive decal system, and the team will also expand the game's color dye system, adding the ability to give accent colors to pieces as well as shininess and gradient to items.

"We've seen the system get better and better the more content we add to it," Shepherd said. "This bodes well for a franchise we want to expand on for years and years."