The Experimental Gameplay Workshop — a curated showcase of some of the most exciting experimental game design in 2014 — featured works that spanned themes like sex, the use of the body in games, forced perspective and subversion of existing game rules.

Both independent and established studio developers took to the stage to talk about and show 13 titles, all of which were experimental in some way, and many of which were still works-in-progress.

Auriea Harvey and Michaël Samyn of Tale of Tales showed The Cosmos and the Cave, a game that Harvey described as a research project about the intersection between sex, spirituality and video games.

"We wanted to explore ... sex in games, because not a lot of people do it, and when they do it's wrong," she said. "What is the game mechanic of sex? It's this embarrassing avatar-based uncanny valley stuff. What we're interested in is what it feels like to have sex and how sex is perceived in your head and your body and your mind."

"At that point, you're not just role-playing an accomplished writer — you are one."

The work-in-progress has players travelling through a tunnel, where many of the actions performed in the game carry sexual innuendo. "As you touch the walls [of the tunnel], there will be a blush of colors," she said. "We have suggestive things where you go backward then forward, then moments of high intensity sexual innuendo."

The premise of the game is that three unstable portals have opened to long dead civilizations, and humanity sends its best scientists to learn about it. Unfortunately, the player, who is a poet, is the only person who survives the trip, and it is up to them to document this lost civilization and save them from the final death of being forgotten.

"As you walk [through this world], you write what you can discern or imagine about their history, their tribes, and after that your story is shared with others ... and you get to see the same world through the lens of others," Scott said. 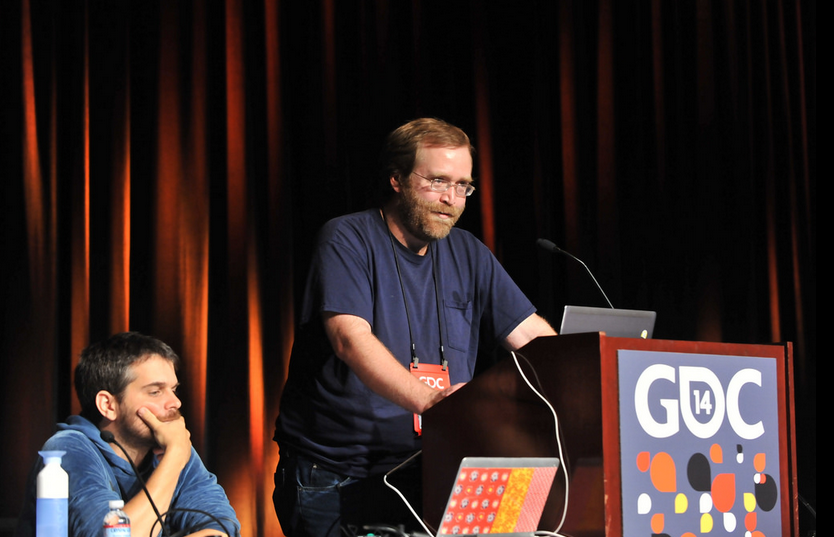 The player's writing will be attached to a moment in the game, and every story written will shine as a star in the game's sky.

"We know gamers have this huge appetite to contribute to the worlds they play in," Scott said. "Every time someone commends a story you write, it shines a little brighter. At that point, you're not just role-playing an accomplished writer — you are one."

Mahdi Bahrami drew inspiration from ancient Islamic art in his game Engare, which is a puzzle game that also allows players to make art. Bahrami told the audience that because many Islamic artists were not allowed to depict real-world objects, they often created art using mathematical and abstract shapes. "I wanted to make a game that somehow showed the pattern on these plates and the shapes we see in the mosque," he said.

Engare consists of levels that require players to solve puzzles by thinking logically about shapes. In one early level, players are shown a curved line that they have to replicate by pinning a dot to a ball that is rolling on a flat surface. Depending on where they place the pin, when the ball rolls, a different kind of line will be drawn. This kind of puzzle is expanded to include to falling objects. In one level, players are shown a specific type of curve they need to reproduce. They have to pin the dot to a box that will tumble off another box. When the box falls, the dot will create a line based on the box's trajectory.

The puzzles become increasingly complicated, with players pinning the dot to objects that expand and contract, and even pinning it to the game's menu. If allowed to continue spinning and tumbling, the lines they created come to replicate the abstract shapes of ancient Islamic art.

Bennett Foddy put a spin on Chess with Speed Chess, a game which he made in response to his dislike for the rules of Chess.

"I don't like planning ahead, I don't like waiting," he said. "I like video games, so why not make Chess a game that is more like a video game? A Chess game where you can move at will."

Foddy said he took out everything he disliked about Chess. Speed Chess has no check, no checkmate, no waiting. It's a game of chaos. 16 players inhabit any piece on the board and play the game like they would a real-time strategy game. Foddy invited the audience to play Speed Chess, and every match was over in less than five seconds. "If you like Chess, you will probably hate this game," he said.

"I like video games, so why not make Chess a game that is more like a video game?"

Gabe Smedresman showed off Anchorage, a game about lost relationships and how far we have drifted from the people we know. The game incorporates data from the player's Facebook and email history and tracks how they've interacted with people in their lives. Players appear as a boat floating on a river that represents a timeline. As the boat moves up and down the winding stream, it will encounter other boats that represent the people the player knows. "The more time you've spent interacting with them, they more they will gravitate toward you, and you relive these personal stories as you play the game in your head," he said.

The game doesn't know who is who — it simply uses data to represent the interactions players have had, and it is up to the player to call on their experiences and memories to tell the story of their past relationships.

Other games that were shown at the Experimental Gameplay Workshop include Bounden, a project from Game Oven Studios that encourages players to dance with a partner, Museum of Simulation Technology, a clever puzzle game by Albert Shih about forced perspective, Fru, a puzzle platformer where players use their body to reveal hidden layers in the game, Glitchspace, a first-person "shooter" by Space Budgie that teaches players basic programming, Gorogoa, a hand-drawn panel-layering puzzle game by Jason Roberts, Metrico, Digital Dreams' platformer based on infographics, Double Fine's Hack 'n' Slash and Harmonix's Chroma.