Share All sharing options for: The stupid, ridiculous fun of Goat Simulator

Goat Simulator is dumb, without a doubt — but that's what makes it so brilliant.

The people-licking, goat rocketing, open-world madness that is Coffee Stain Studios' viral hit gives players the chance to experience what few games offer — pure comedic chaos. During a recent hands-on session with the title at Game Developers Conference 2014, I experienced all of the following in a span of about 30 seconds: headbutting humans, tongue-lashing basketballs, plowing into cars, cars plowing into me, pool trampolining and shooting through the air like a poorly aimed missile.

My experience was nothing if not varied.

Already the studio's most popular project to date, Goat Simulator began as a game jam project with no intentions of a real release. In February, following a positive reaction from the gaming community, it was announced for Steam. Coffee Stain likens it to a skating or a Garry's Mod-type game, but with goats. It's a title that refuses to take itself seriously, developer Armin Ibrisagic told Polygon.

Players do "stupid shit" and complete missions to score points.

In Goat Simulator, players do "stupid shit" and complete missions to score points, which can help them unlock other goats. The game features extreme ragdoll physics and basic functions to jump, run and slow down time, as well as a lick feature that allowed me to latch on to everything from basketballs to people and cars. Licking was useful and terrifying, thanks to a crazy bug that sometimes stretches the goat's tongue into something cartoonish and frog-like. According to Ibrisagic, it's the kind of goofy glitch the team welcomes.

"What we don't want is bugs that crash the game, because that kind of ruins the gameplay, but with all the physics we're using that's still going to happen," Ibrisagic said. "We're adding an achievement when you crash the game that's called 'Involuntary QA.' All the other bugs, like the physics for your neck and everything, we just think it's really hilarious so we're definitely going to keep that."

The game's humans — all of which are modeled after the dev team — are walking objects for players to lick, stack, headbutt and otherwise pester. Players are in for a load of Easter eggs, such as a strange pentagram we glimpsed while watching other demos. Ibrisagic wouldn't say exactly what the pentagram does, but simply said one of the game's artists "likes making monsters." 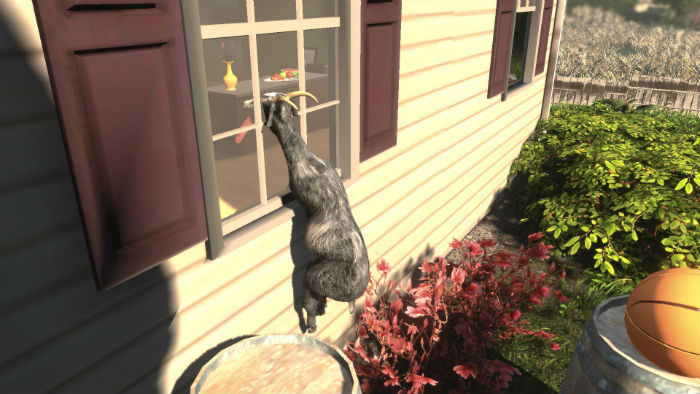 Goat Simulator is set to launch April 1 via Steam for Windows PC. Releases on other platforms aren't currently planned but remain a possibility.

"We want to do Mac and Linux, but we've been developing for two months so it's never been anything that we planned," Ibrisagic said. "But we're looking at ways we can outsource it. I don't want to promise anything, but hopefully it's going to happen. We just don't know when."