With the Nvidia Shield's next software update, which is set for release April 2, Nvidia is looking to continue to expand the handheld's use cases — the company wants the Shield to be the definitive, all-purpose device for on-the-go gaming.

April's Shield update will upgrade the handheld to the latest version of Android, 4.4.2 KitKat. Nvidia is also delivering a beta version of a frequently requested feature: You'll be able to use the Shield's existing GameStream functionality — which allows for a Windows PC game to be streamed to the device — outside of your home. And Nvidia is making it all more attractive to potential customers: From now through the end of April, the company is offering a $50 discount on the Shield, dropping the price from $249 to $199.

During a demo of the Shield's new features in New York last week, we were unable to test the out-of-home GameStream beta because of on-site network limitations. But if the feature works as advertised, you could turn your smartphone into a Wi-Fi hotspot and play Titanfall over the phone's 4G LTE connection while you're commuting to work. The Shield will also allow you to remotely wake up a PC that's in sleep mode and log in to it, so you don't need to leave your computer on all day. Streaming PC games to a Shield that isn't on the same network will require a minimum Wi-Fi bandwidth of 5 megabits per second (upload and download).

you could play Titanfall while you're commuting to work

We did play Titanfall via standard, in-network GameStream during the demo, and were very impressed by the experience. Everything ran smoothly aside from a few brief instances of lag, and we were able to do very well in a round of Hardpoint Attrition — about as well as if we'd been playing normally on an Xbox One.

The upcoming Shield update will also add beta support for streaming games from laptops, a feature that debuted in Nvidia's new GeForce GTX 800M series of notebook graphics chips and will soon be supported on all of the company's Maxwell- and Kepler-class laptop GPUs (every 700M GPU and most 600M GPUs). And GameStream on the Shield will also offer basic support for streaming any kind of software from a PC. In a pinch, you could open up a PowerPoint presentation on the Shield and work on your slides, using the right analog stick as a mouse replacement and Android's on-screen keyboard for typing.

Shield owners who use the handheld in console mode — i.e., hooked up to a TV — will now have more options. The April update brings in support for Bluetooth keyboards and mice, so you'll be able to play games like Civilization and StarCraft on your TV through the Shield. And if you have a micro USB host OTG Y-cable and a USB Ethernet dongle, you can stream games over Ethernet while charging your Shield.

Nvidia also wants to give Shield users more customization and control over their gaming experience. The update refreshes the interface for TegraZone, which is Nvidia's storefront to highlight mobile and PC games that will offer the best experience on the Shield. According to Nvidia representatives, the redesigned setup is meant to provide better organization and discovery options. And TegraZone will now allow players to optimize their GameStream experience by manually setting bit rate, target frames per second and other options for each game. Finally, Nvidia is improving Gamepad Mapper — which maps the Shield's buttons and sticks to a touch-based mobile game's controls — by introducing a simpler interface and better options for sharing settings with other users. 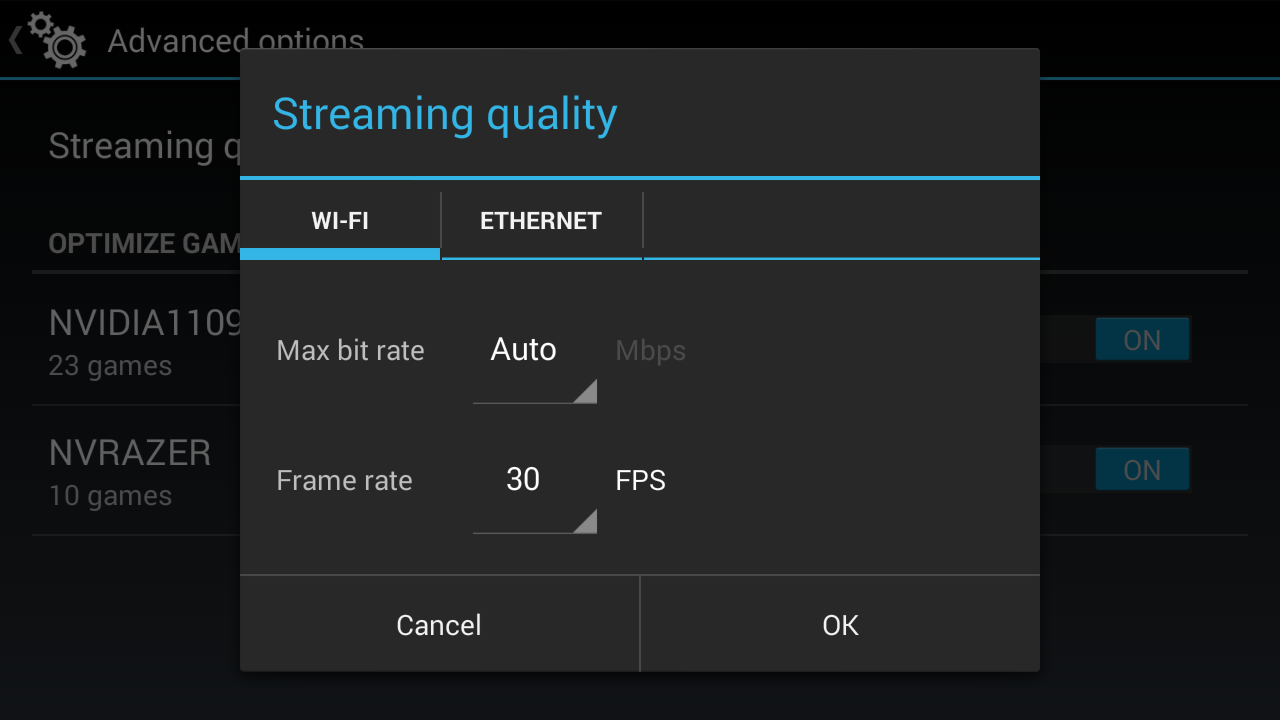 Google originally released Android KitKat at the end of October 2013, and the latest version, 4.4.2, came out in December. Delays between Google's release of an update to Android and that update's arrival on a particular smartphone are common, since individual carriers often customize the operating system to their liking before releasing the update to customers. Nvidia representatives told Polygon that the Shield almost runs stock Android, but explained the lag time between KitKat's release and its debut on the Shield by saying that the company didn't want to release the operating system by itself.

"We [...] try to couple the [Android] updates with other stuff that we're working on. So it's not just an Android update; it's a Shield update, which happens to include, in this case, KitKat," said Bryan Del Rizzo, senior public relations manager for Nvidia, in an interview with Polygon during last week's Shield demo.

"it's not just an Android update; it's a Shield update"

The individual changes contained in the April update may seem like they're each addressing a very small section of the Shield's user base. But according to Nvidia, that's an important part of how the company thinks about developing new features for the Shield, in addition to Nvidia's own roadmap for the product.

"There are so many little use cases that gamers want to have with their devices, and I feel like Shield is a great example of what Nvidia does, which is provide as many use cases to as many of our customers as possible in the most robust way," said Andrew Coonrad, technical marketing manager for gaming technologies at Nvidia, during the demo. Del Rizzo added,"You may not take advantage of them all. You may not be interested in some of them, but the capability is there for you to use if you want to."

Del Rizzo explained that one of the most popular uses of the Shield has been for running emulators, which is something that Nvidia never foresaw. "That's something that gamers are doing. And all the streaming stuff, people wanted this ability. And then, we just found that not only did they want just to do games, but they want to do other things. They want to do social media stuff; they want to do iTunes or their Google Play libraries of stuff. It's kind of taken on a life of its own." 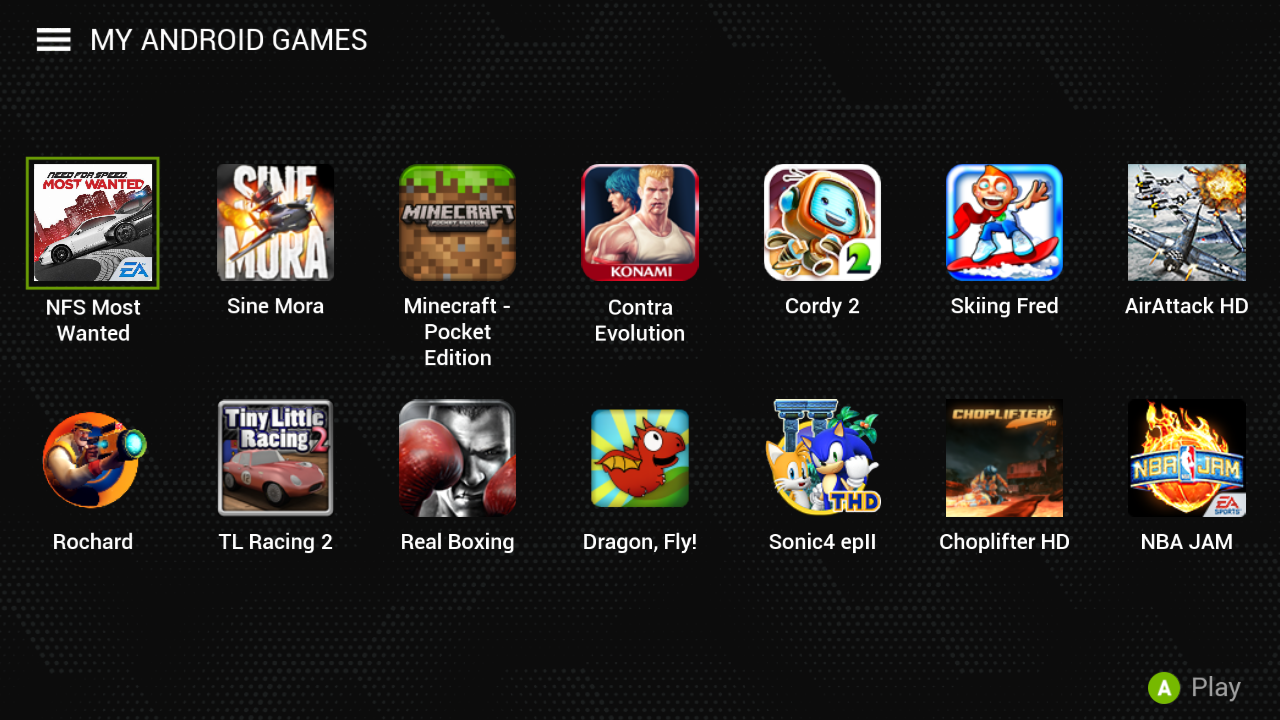 Most of the Shield's potential user base consists of individuals who likely already own an all-purpose device: the smartphone that's in their pocket, and perhaps a tablet as well. Nvidia's focus with the Shield is on gaming, which is borne out in the company's strategy with its April update, where the company prioritized a variety of gaming-centric additions and improvements over an Android upgrade. And even if these features don't make the Shield that much more enticing to gamers, they may prove fruitful in the future, Nvidia told us.

"We tend to leverage our technologies across a wide variety of different platforms and businesses," said Del Rizzo. "Everything we're doing here could potentially be leveraged somewhere else. Or, we're leveraging other technologies we've developed for other things, for gaming. So, Shield as a device is what we believe [is] the ultimate mobile gaming platform, and there's a number of reasons why that is. But everything we're doing with Shield can be used in other areas. The technologies are designed to scale for other things."

Del Rizzo used Nvidia Grid, the company's cloud gaming hardware platform, as an example. The Shield supports Grid-based streaming of games from the cloud, but Nvidia is also licensing Grid out to Amazon Web Services and other companies for cloud-based applications.

"There's all sorts of interdependencies that we're developing that can be used in areas that may not be totally clear to anybody yet. But that's the direction that we're going: leverage stuff all over the place and develop new products and new markets that can be powered by Nvidia," said Del Rizzo.