Share All sharing options for: Diablo 3: Reaper of Souls' The Mystic abolishes the 'Christmas Tree effect'

Diablo 3's Reaper of Souls expansion grants players greater ownership over their character's aesthetics and obliterating the "Christmas Tree effect" with the addition of a new Artisan, Myriam Jahzia, the Mystic.

Players can customize the appearance of an item — armour, weapons — while maintaining its properties by paying the Mystic gold to transmogrify it. Speaking to Polygon, lead character artist Paul Warzecha explainedthat through transmog, players can dictate their own style and create for a more harmonious look, diminishing the Christmas Tree effect created by mismatched armor and weapons.

"Transmog is actually one of the most exciting things for me as a character artist," Warzecha explained. "We try to make the gear look as bad-ass as possible and the gear looks bad-ass when you first get it. But when you pick it up piece-by-piece, you have a look that doesn't necessarily go with the glove, that doesn't go with your pants: you get what we call the 'Christmas Tree effect.' And transmog gives you the opportunity to completely move away from the Christmas Tree effect."

While players can potentially make the item look however they want, Warzecha explains they don't have access to high level of customization out of the gate. That creative freedom is unlocked as The Mystic is leveled up.

As players pick up new armour, The Mystic will learn an item's visual properties which will allow players, giving her the know-how to transmog armor based on that item in the future. Players don't have to keep the item in their stash for The Mystic to retain the knowledge. 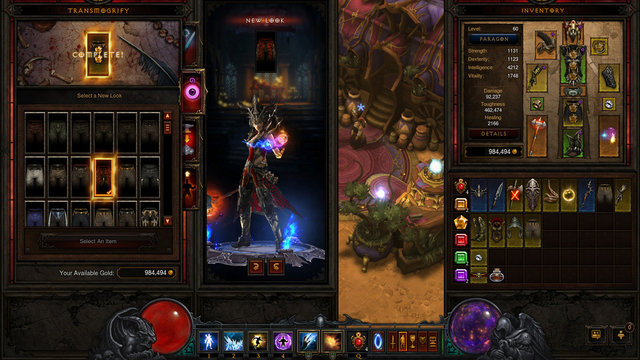 "It is super exciting because I have seen some fantastic looking stuff now and it's even combinations of stuff that even I would never have thought of putting together," Warzecha said. "But you know, it makes your character feel like your own."

"So, if there're some cases where you are like ‘Man, why do I have an item with intelligence for my Barbarian?" Warzecha said. "You have the ability now to re-roll that with The Mystic and she will give you a better option, and you can level that stuff up and make gear that was good, great."

The Mystic was considered for Diablo 3 in the early days of the game's development, initially as an Enchantress, but was removed because the developer felt that her skills weren't needed in the game's customization system. The addition was reconsidered for the expansion, which launched this week on PC and Mac, once the developer saw how the limited customization and clashing styles restricted players from creating visually appealing characters. This imposition became more apparent as the player gained better gear.

"I think transmog came out of the fact of that you have these people with the Christmas Tree effect," he said. "You have this gear up at insane amounts and you think ‘Man, I don't look as cool as I did back then.' And that's why we went back to make sure that is what really part of the kit, and now you have that opportunity."

As the team wanted to deliver an overall feel that harkens to the dark gothic fantasy theme, the concept of haunted apocalypse was created where every decision they made in regards to character design fell back to that.

Diablo 3's sixth class, the shield-wielding defender of the Zakarum faith called the Crusader, was revealed last August alongside Reaper of Souls. It was important to make the Crusader class' design reflect his abilities while adhering to the theme and serving the gameplay.

"You've got this medieval warrior that we'll always call our ‘knight in battle-scarred armor'," Warzecha said. "We need to have him super heavy weighted, because he is a mid to close range melee character. But he also has some very cool skills, which have a bit of range to them. So decisions as to his design, as far as the heavy armour combined with the flowing tabard, the designs on what he wears, like on his crusade shield, all of the design details speak to what he is all about."

And you think ‘Man, I don't look as cool as I did back then.

The team of artists worked closely with the animation and engineering departments to get the Crusader's flails to feel heavy like "big chunks of iron hanging off chains."

Warzecha said the amount of new content in terms of what players can now do with their characters, along with the addition of new weapons and monsters is "mind blowing." Not only is the new content visually different but the newly introduced elements all play in unique ways and "all the rules are completely thrown out of the door."

"You are going to play monsters in ways you never expect to, you are going to see environments in ways that you have never seen before," he said. "It feels completely new. For instance, you probably got used to fighting skeletons being grouped to together in a certain way, and you'll stop and think ‘Aww, I thought I knew how to handle this.' And now you are making completely different decisions, as design has taken these different things and made different combinations in ways nobody thinks about."