In a sport that usually requires patience — along with good judgement and wicked aim — it's a pleasant change to skip past the waiting period and get on with your swing. During a recent demo in San Francisco, I spent some hands-on time with the game's local multiplayer.

World Tour, which is slated for launch on Nintendo 3DS May 2, allows players to pick from realistic courses, or more off-the-wall levels befitting the longstanding property, as well as favorite characters from the series. I geared up as Bowser, Mario's long-standing nemesis, against three other players in a six-course tournament.

Each character revolves around a slightly different playstyle, which mainly boils down to their power. Additionally, players can choose to putt as a Mii; a Nintendo spokesperson said that Miis can mirror the abilities of Mario characters, depending on their gear.

On the course, I was able to simultaneously take my shots, rather than waiting for my friends to line up their moves. As we progressed, small icons would appear on-screen, allowing me to measure their ball's progress against my own. Although the game doesn't feature voice or text chat options, I could razz other players by sending emoticons. 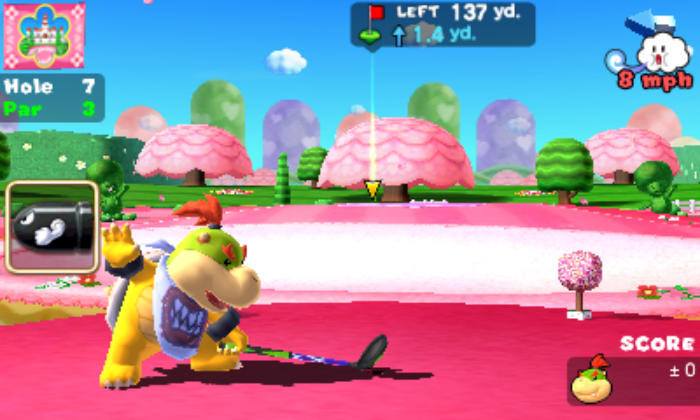 In addition to local multiplayer tournaments, World Tour will also allow players to compete in online competitions at their own pace. Players can simply set their rules, play a course and submit their score, the representative said.

"You also have the ability to join special communities that will have tournaments with special rule sets," the Nintendo rep said. "People can really play the game however they want. Some people want to play Mario Golf with realistic courses, no items, basically really limit things to more of a traditional kind of golf setting. Other people want to have the craziest — all the items on, just completely bananas."