Share All sharing options for: Exploring the frightening depths of the ocean's abyss in a walking coffin

The developers call it a walking coffin and after a few minutes of play time using the Oculus Rift I understand why.

The virtual atmospheric diving suit is confining, claustrophobic when viewed through the Oculus Rift headset. The feeling is even more oppressive when wearing a pair of headphones.

You can hear yourself breathe and see your breath fog up the glass dome inches from your face as you slowly trudge through the silt of the deep abyss.

Diving suits like the one featured in Windows PC survival game Narcosis were first invented in the 1700s. Much has been done to advance the safety of these underwater, pressurized suits of armor, but they remain hulking 500-pound wearable life-support systems. Designed to allow a diver to drop to depths of more than 1,000 feet and stay there for prolonged periods of time, the suits feature thrusters, lights, tools, but few ways to return to the surface without help.

That's the hook for Narcosis.

Players awaken in a submerged atmospheric diving suit, somehow cut off from their surface support team. The point of the game is to survive.

"So, the idea was to do survival horror but trying to have it with only plausible and realistic elements," said Quentin De Beukelaer, one of the game's designers. "You know, it's really cool to use zombies, aliens, supernatural elements. It's great. We love Resident Evil and that kind of stuff, but we try to have this challenge of, let's just use what really exists in the real world. And the most frightening stuff you can find, it's in the abyss, these kind of creatures you have and this feeling of being alone with the pressure of dying in the atmospheric depths." 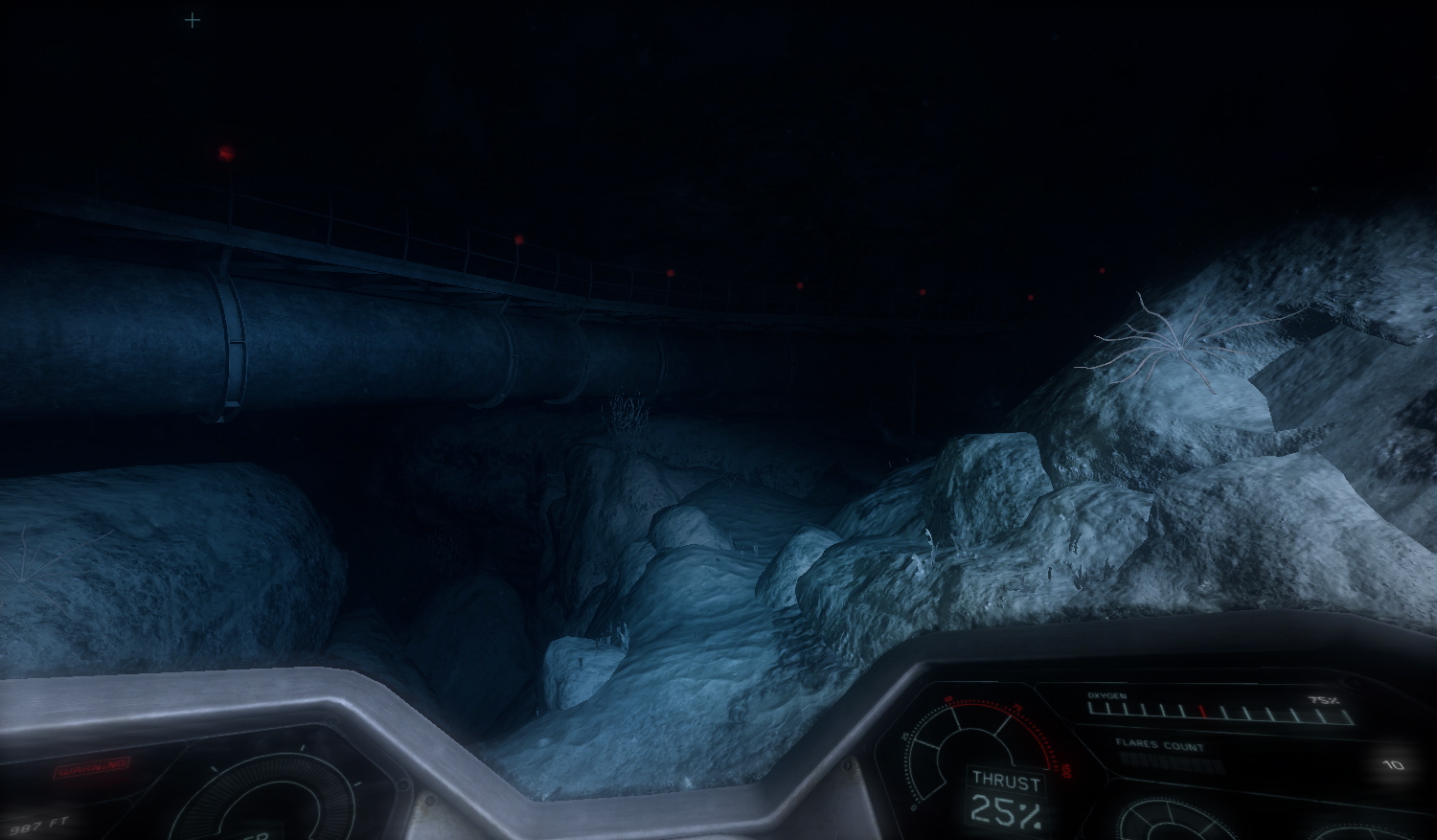 While the game's suit has a knife, flashlight and flares, its most important feature is the oxygen it can store and the suit itself which withstands the crushing pressure of the abyss. Players slowly walk through the underwater terrain and can also use the suit's thrusters to sort of scoot across gaps or quicken their pace temporarily.

When the game starts you're nearly out of oxygen, so your first goal is to find more, your chief goal, though is to find a way up, to safety.

"Because this kind of suit can weigh a ton and you are like a few hundred meters deep in the sea it's not like you can swim actually," said De Beukelaer. "You need this kind of device to get out. And so the suits are like your walking coffin because they are protecting you, but at the same time, if there is just a small breach, with the pressure of the water, it just explodes. We tried to play on having this in the design of the game with your suit being super resistant but, if you just have a small breach on the glass, a small explosion, it just breaks."

Wandering through the deep I discovered this first hand when I took an unfortunate step off a underwater cliff. I floated for a few seconds, down into the darkness, and then hit, the glass shattered on my helmet and the game ended. And it's not just the falls that will kill you, the particularly nasty sea life of the abyss can do you in as well. 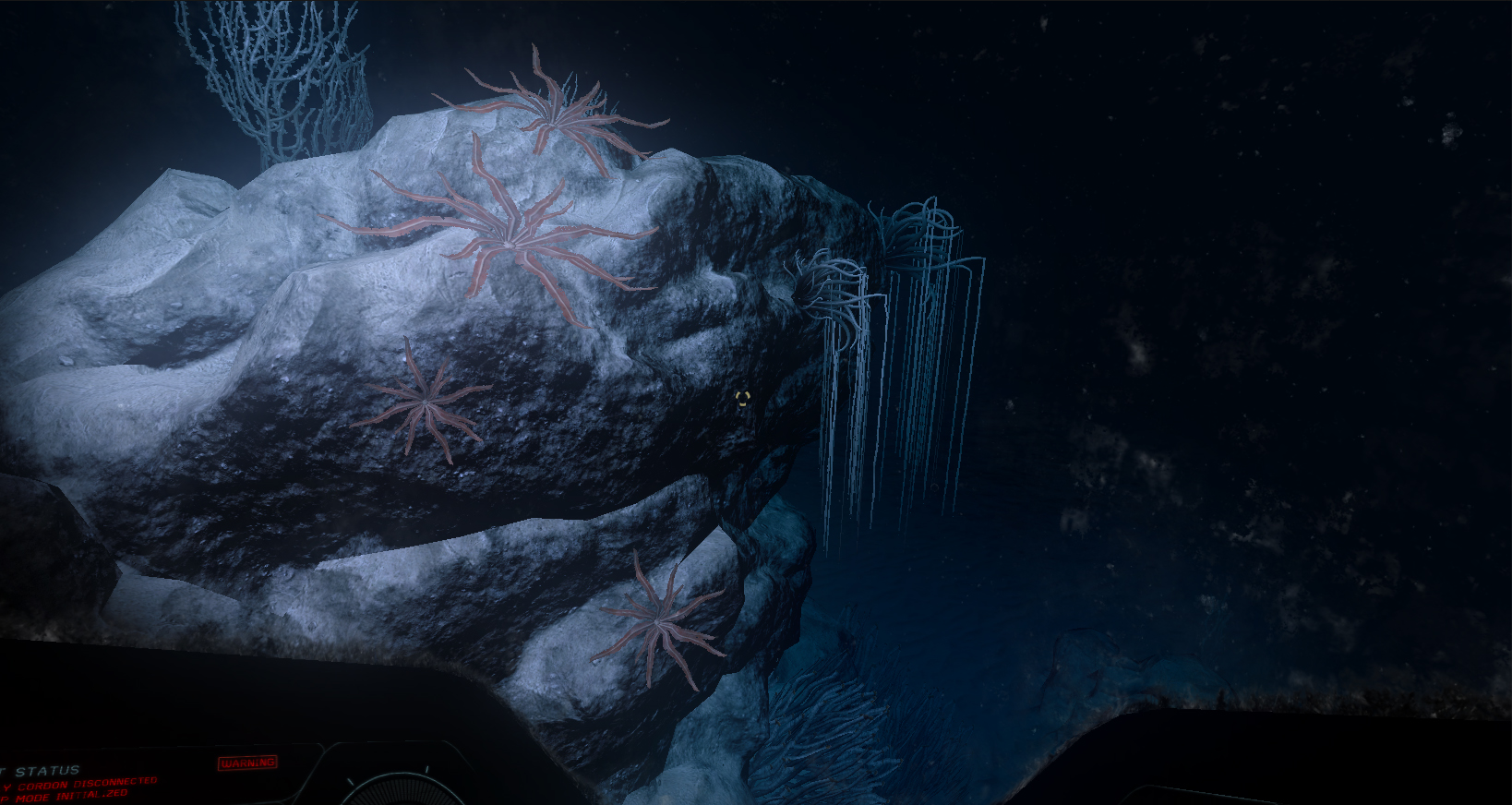 "We wanted, contrary to many FPS, we wanted to make the player more the prey than the predator," De Beukelaer said. "Still, we have a knife, like a diving knife, and so you can fight back. If a creature attacks you, you can fight back, but you will never have the initiative because you are too slow to do it."

The game is being developed on Unity by the team, a collection of developers so new they don't yet have a name for their studio. The group first created the concept for the game while in college and now spend their spare time working to polish the title for retail release. The game, which they hope to make a five hour or so long experience, runs with or without Oculus Rift and the team hope to one day bring it to next-gen consoles.

While my time with the game was mostly about the tense exploration found in the game, De Beukelaer said there would also be an element of puzzle solving.

"Unfortunately, we couldn't push too far the puzzle solving stuff in the demo because we wanted to be instant and more immersion but we have this volumetric light system that allows you to, for instance, to throw flare light, and the fish will be attracted by it," he said. "So we try, obviously we see it on first person, so we can't go too far on the puzzle side. we try this kind of puzzle stuff, where you try to bait the fish and that kind of thing."