Kirby is famous for his ability to slurp up enemies with all the intensity of a black hole. In Kirby Triple Deluxe, that power ramps up to an all-out Hypernova mode.

During a recent demo in San Francisco, I tested out the stubby hero's new powers. The game plays much like fans of the series have come to expect: Kirby scuttles through levels devouring enemies, stealing their powers and picking up items to the tune of cheery, energetic themes.

Kirby's powers were kicked up a notch when I encountered the Miracle Fruit, which springs up on a vine at key level points. Eating this fruit triggered Kirby's Hypernova mode — a special state in which Kirby shimmers like a soap bubble and can inhale or pull bigger objects.

Hypernova mode isn't a time-limited ability and will instead last until players have beaten key sections of the level, a Nintendo representative told me. During my demo, this translated to clearing out otherwise immovable objects. I violated environmentalist principles by uprooting massive trees and swallowing them whole, or suction cupped Kirby's alarmingly stretched mouth to trucks to pull and push them where I wanted. 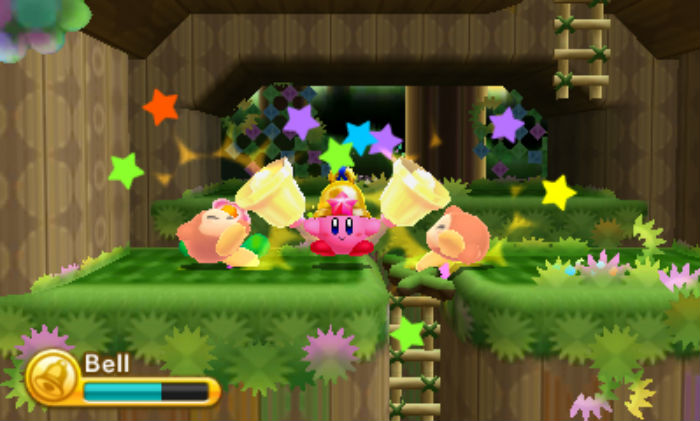 Along with Hypernova mode, Kirby Triple Deluxe features several new copy moves. The Beetle copy ability outfits the rotund hero with helmet horns I could use to buck and spike enemies. The Archer copy ability, meanwhile, granted me a fancy feather hat and a bow and arrow for long-distance damage.

Kirby Triple Deluxe — the series' first entry on Nintendo 3DS — launches May 2. The game is already available in Japan.