Share All sharing options for: A thousand details create a uniform appearance in sports video games

To go ahead and answer the question, no, MLB 14 The Show will not have the insane bacon pants that a minor league team revealed a few weeks ago. When the game arrives on Tuesday and your virtual minor leaguer is playing for the Lehigh Valley IronPigs in the Philadelphia Phillies' system, he won't be served with a couple hickory-smoked strips.

Why? It's not because The Show's artists were caught, heh, pants down by the new look. They saw it and loved it and know the IronPigs are in their game. The answer is in the details, almost literally.

You wouldn't think it, but the uniform files in MLB The Show are really quite large, said Jody Kelsey, the game's senior producer. "It's technically possible to patch them in," after the game releases, "but the size of them deters us from doing that."

The size of them is also why, for the supporting cast of 60 minor league teams — which most players encounter in a career mode where they can't choose what they wear each game — just the home and away uniforms are rendered. No ugly Christmas sweater promotions, no R2-D2 jerseys and, alas, no bacon.

It's come to this: Sports leagues have so many different looks, promotions and novelties, and video game artists have become so good at bringing them to life, that a game like MLB The Show has to be mindful of the space left in its virtual closet. And it will remain a concern, if not a growing one, as illustrators on titles like The Show, or NBA 2K, or Madden NFL explore the capabilities of the PlayStation 4 or Xbox One.

Ten years ago, they could delight fans just by including a sleeve patch on the defending champion's jersey; now they have to make sure the stitches on the tackle-twill uniform numerals are the proper shade of navy at all times under a virtual sun.

"One of the things we take pride in is making the most realistic baseball game out there," Kelsey said, "so when it comes to the art, we have to make sure that is up to par." A staff of eight artists work on uniform creation for MLB The Show, said Gil Garcia, who leads the game's character team. "It takes the entire development cycle to build all of those correctly," he said.

Even with exact color mixtures and rigid style guide rules, it takes that long because uniforms greatly shape the public appraisal of the game's realism, the coin of the realm to a sports title.

The defunct MLB 2K series struggled just to get the shape of the back numerals correct and for several years used the same typeface for all player name tapes — an instant and constant jolt to any sense of immersion. Another decommissioned series, EA Sports' NCAA Football, had a constant cat-herding problem trying to get current uniforms for more than 120 teams in major college football. Kansas played with outdated helmets all of last season, and current ones weren't among the 10 DLC packs the game released later — probably because the Jayhawks aren't any good and no one but alumni would be using them.

"Every year we evaluate what is in our equipment set and, based on the number of features, it can be a disc space issue," said Jeff Ostergaard, art director for the Madden NFL series who also worked on NCAA. "You have to keep the content fresh and also keep the library from being so big and full of stuff that users just aren't using it." 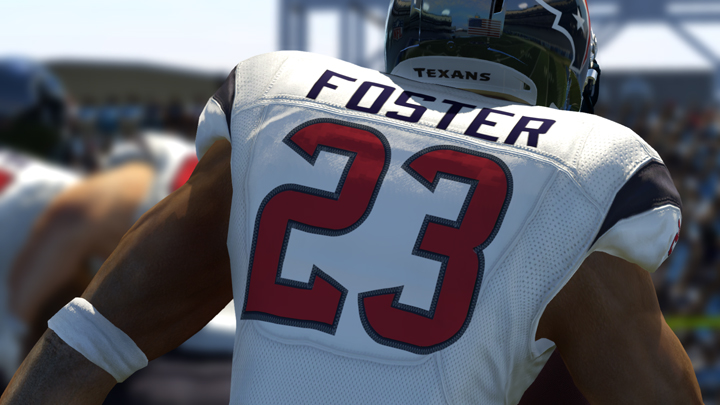 Not only is what the players wear important, it's how they wear and accessorize it that adds another layer of complexity. MLB The Show has a designer, Lorne Asuncion, whose job is to obsess over Coco Crisp's sleeve length during day games. "I'm a baseball guy; I want to get this perfect," he says simply. Madden's guys study wire service photos to make sure a defensive lineman's pads are the proper height. NBA Live has a stylebook full of closeup photos of player tattoos, all shot on the team's official pre-season media day. I've seen that stylebook. It is impossible to imagine it has value for anything other than making a video game.

"I've been a part of this franchise since the start," said Ryan Santos, a senior designer on NBA Live. In the early days, headbands were the uniform accessory that distinguished a player. "Then, after [Allen] Iverson made tattoos big, we would request that from the league. 'Hey, do you guys have reference art for the players' tattoos?' We'd have to look at in-game shots, not studio shots under lighting." After enough pestering, the league started making the tattoo style guide.

"It shows how the NBA is involved in making sure we get all of this right," said Paul Kashuk, NBA Live's art director. "It's an extension of their brand, after all, so the more they can help, the better."

MLB The Show's designers are constantly referring to their league's official style guide, especially in the run-up to the game's completion. "It's more along the lines of things like the new All-Star Game uniforms, the Futures game, things that they typically don't have ready until the middle of the year," Kelsey said. "That's where we ask for special favors, and usually things come in," before they are put in the official guide.

The style guide is still a controlling document — the terms of the license require developers to use what the book references. In each of the past two seasons the Atlanta Braves sought to use the old "Screaming Brave" logo. Both times the Braves pulled back the design — a sleeve patch and a batting practice cap — following an outcry over the use of a Native American caricature. The second time, MLB The Show made a rare mid-season revision to Atlanta's BP caps. Minor league uniforms are one thing, but anything worn by big league clubs absolutely must reflect reality. 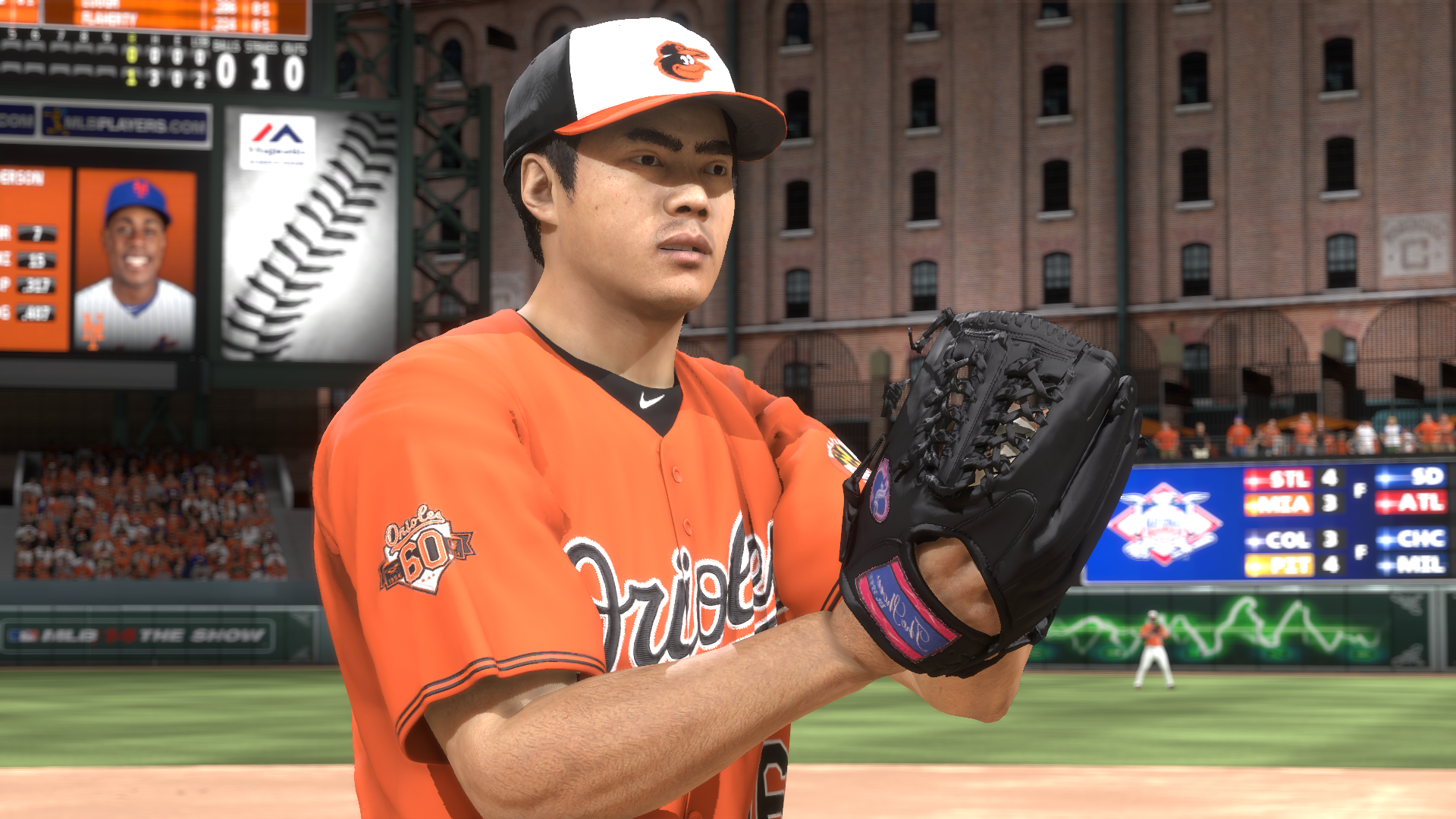 Still, if The Show's designers get an outside warning that a change is coming, but it hasn't gone into the stylebook yet, they will push back against the league to make sure the change is official. A logo swap for the Cleveland Indians — again, a franchise gradually distancing itself from native American imagery, except for the nickname — is a current example. The grinning Chief Wahoo, long criticized as a racist cartoon, will be replaced by a red block C as the team's primary logo. "The C logo came up late in the cycle," Kelsey said, "December or January. Someone testing the game for us read about it and sent us an email saying, 'Hey, check this out.'"

Even after getting all of the proper assets, a ton of fine-tuning is left. Sports titles are increasingly engineered to look like a game that is televised as opposed to how it is actually played. Even with the most sophisticated lighting, physics and modeling, there still can be distortions that have to be smoothed out. "You literally can't just take the color off the style guide and put in a garment in the game and expect it to look right," Kashuk said. "We've heavily invested in scanning player likenesses, and we put that to uniforms to get the color right."

EA Sports has a very close relationship with the NFL and its equipment providers, and gets early access to new designs — including physical samples — to inform its work on Madden. Yet Ostergaard said even when a new uniform comes in — the Tampa Bay Buccaneers are a good example — there will still be minute changes, sometimes made by the head coach himself, before it is worn in a regular-season game. "We've noticed teams will change the stripes slightly, an equipment manager will make those changes," he said. "It'll be a slight alteration; it's never performance-related, but I think they make these decisions based on how comfortable the athletes are, and sometimes aesthetics. Sometimes it could be based on their success wearing a particular uniform."

And if the past is any guide, the expectations on delivering such minute realism will rise along with the ability to deliver it.

"With the added horsepower of the PlayStation 4, it brings some complexity to it," said Paul Hainey, MLB The Show's art director. "It also increases the amount of time we have to spend on these things. It's sort of putting it under a higher-powered microscope."