Trendy Entertainment is looking to build a more connected world with tower defense role-playing game hybrid Dungeon Defenders 2, designing the game's maps, enemies and characters to present a more complete look at the world of Etheria and its lore.

Marketing director Philip Asher walked Polygon through some of the changes made to Dungeon Defenders 2 from its predecessor, which initially launched for iOS and Android in Dec. 2010 and for PlayStation Network, Windows and Xbox Live the following year. In addition to being able to combine tower effects and characters' different abilities, DD2 also features a graphical overhaul.

According to Asher, Trendy is "really focusing on the lore for this game," going so far to provide visual cues in each map that give the sense of a more connected world. In one map set within eerie ruins, we watched a character run to the edge of a platform and look out beyond the stone pillars; in the distance was a mountain, haloed by the setting sun. Asher said that close to that mountain is a town square, under which lie sewers filled with magical water — sewers in which we had fought earlier that afternoon. Designing maps as part of a larger, more organized area is one way Trendy is building up Etheria's history. 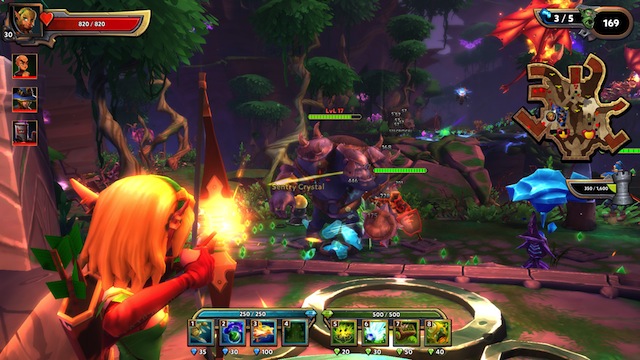 There's a story behind everything players find. In those same sewers is a flow of water with magical properties that make people stronger. The waters flow through pipes and across stones that provide evidence of an ancient race, a civilization predating our heroes. The reason these four main heroes — the Squire, the Monk, the Huntress and the Apprentice, all now teenagers — are defending these waters is because Etheria's army wants to utilize them against the enemy. Heroes will protect these sewers from waves of oncoming enemies for the greater good of their kingdom.

"In the first Dungeon Defenders, you didn't really know you were in a castle until you got significantly through the experience," Asher said. "We wanted to create this woven together world and show the connection and a sense of adventure by going through different places.

"All the maps in DD2 connect, and we're working really hard to make sure it feels like a real world that you're in, even though it's a session-based game," he added. "The narrative very clean wraps into all the environments." 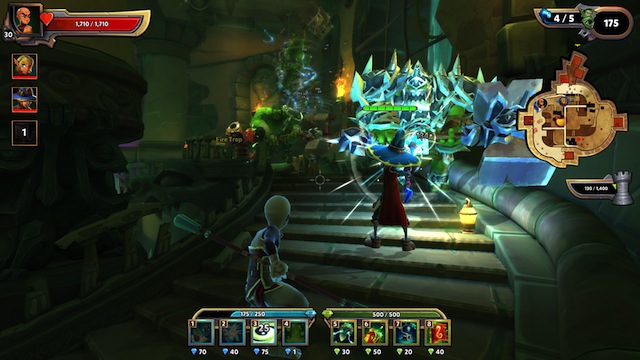 Map and enemies are designed not only to feed back into DD2's story, but to keep players on their toes. In one new map, we watched our heroes defend two objectives from hordes of oncoming enemies, each enemy with a different attribute and attack methodology. One would ram straight for the characters, while another hung back. Enemies are also broken into tiers that not only behave differently, but are harder in different ways. Asher explained that it's not just a matter of having more HP, but rather when and what kind of attacks the enemies unleash. Some will interrupt players' attacks while more assassin-like opponents sneak in for quick attacks. Others will go straight for core defenses and try to bring them down.

Typically a story-focused game involves some kind of single-player campaign; that's not the case with Dungeon Defenders 2. Trendy believes the way it is building Etheria now is better experienced with friends. Feedback from DD1 players indicate that they spent most of their in-game time playing on the couch with friends, Asher said. It was this feedback that made Trendy go for a cooperative title, and while you can play DD2 solo, it doesn't seem like the game would be as rewarding as it is with buddies. 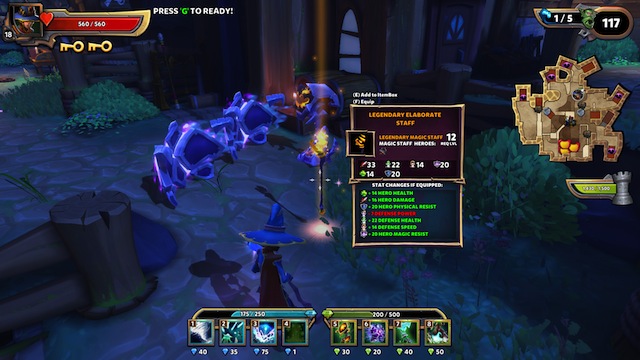 Asher also said that after numerous complaints of players hacking and cheating to obtain more powerful items in the original game, Trendy decided to lock all activity server-side on Trendy's own servers. This way, the studio can assure players all item drops are "safe" and in a secured environment, a preventative measure against hackers meant to set up a more trustworthy play environment.

"It's a safe, controlled environment — people can no longer hack the game and run around with everything," Asher said.

But what really stands out in Dungeon Defenders 2 — and lends a lot to Trendy's focus on world-building — is its upgraded art style. Characters, magic effects, waterfalls, leaves, floating spirits — all are hand-drawn by Trendy's art team to look like it was pulled straight out of a cartoon. We watched floating purple ghosts with long faces float by, sparkling waterfalls cascade down from ceilings and magic puff out from the Apprentice's hands. All of it, hand-drawn. Even the game's UI is hand-drawn. 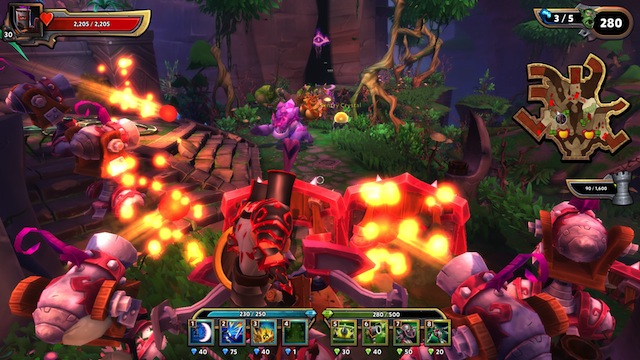 "Our is team is working really hard to reach a hand-drawn cartoon style," Asher explained. "I think the only game that really comes close to what we're trying to do is [Level-5 and Studio Ghibli's] Ni no Kuni; we've been working on this a lot since Comic Con. A lot of new techniques like the hand-drawn flip book visual effects are throughout each level. We're focusing on the art."

Trendy's changing of the art style is one of the "major staples of revision for Dungeon Defenders 2." While the particle effects used in Dungeon Defenders were well received, for the sequel Trendy wanted to create a cleaner, brighter, more stylized look. Even the characters' clothing is part of this revisionist attitude towards the artwork: As stats increase and they become more powerful, outfits will morph and change into different colors, offering visual cues of increased abilities.

Dungeon Defenders 2 is in development for Linux, Mac and Windows PC and is on track to soft launch this spring.