South Park, like all episodic comedies, is an engine built to generate laughs. And developer Obsidian has built a 10-12 hour game that is perfectly crafted to house that engine.

South Park: The Stick of Truth is a great South Park game.

You'd be forgiven for thinking that's something of a backhanded compliment. The five previous games based on the cartoon have been met with abject scorn, save for South Park Let's Go Tower Defense Play! which was pleasant, if not exceptional.

But that's part of what makes The Stick of Truth such an achievement. South Park, like all episodic comedies, is an engine built to generate laughs. And developer Obsidian has built a 10-12 hour game that is perfectly crafted to house that engine.

South Park is an engine built to generate laughs

You are The New Kid in the town of South Park. Moments after being forced out of the house by your parents to meet the neighborhood kids, you're swept up in their town-spanning, Dungeons-and-Dragons-inspired battle for The Stick of Truth. Cartman, styling himself as a powerful wizard, has raised an army of cardboard-armored kids for his human faction to protect the all-powerful stick from the elven faction two houses down. After choosing if you'll serve as a thief, mage, warrior or Jew, you pledge your fealty and enlist in his forces.

In much the same way that South Park uses the youthful naivete of its leads to undercut its often serious messages and very adult content, Stick of Truth clings to this idea of playing make-believe in a way that keeps the proceedings weirdly grounded no matter how outlandish they get later in the story. Careful inspection of most of the game's scenery, weapons, items and armor will reveal their kid-made, heavily-masking-taped origins. This is not only adorable but also provides the game with a consistent aesthetic that feels true to the series and completely fresh.

Don't be fooled by the fact that the game takes place in a sweded fantasy world, there are some surprisingly robust mechanics under the surface. At it's core, it's a turn-based RPG where you and a partner of your choice (like Butters, a paladin, or Kenny, a charming princess) take on hordes of enemies. You use handmade weapons and armor to which you can add "equipment patches" — fake vampire teeth or bubble gum for example, that can layer on different types of damage like bleeding or frost.

I found an involving amount of complexity in figuring out which patches complemented each other best. I tended to lean towards items that caused bleeding, so towards the end of the game I favored my Crossbow of Impalement with the IV Needle patch which added three stacks of Bleeding damage to each attack. I boosted the effect with a perk (unlocked by making friends in South Park) called Bloodlust that let me do more damage to bleeding enemies. There is, suffice to say, a lot to play with.

Each character has abilities they can channel like the mage's fireball attack (really just a Roman candle) or Jimmy's gigantic, mountain-spanning alphorn that makes enemies poop themselves to death. There's also magic in the form of ... well, farts. Different farts that produce different effects depending on ...

... you know what, you get the idea. Fart magic. This underscores one of The Stick of Truth's (perhaps unavoidable) stumbling blocks, and that's joke repetition.

I'm not a proud man, I'll laugh at a fart, ask anyone. But I'm not Terrance and Phillip. I'm unable to find them ceaselessly entertaining. Similarly, 5-10 second long animation sequences for abilities gradually slip through repetition from funny to dull so precipitously that I started avoiding certain powers to avoid the lull.

Elements that are frequently repeated in Stick of Truth tend to skew towards playfully benign rather than reaching for a laugh, so it's not a huge issue. But when fart magic and other gags are run into the ground, it's one of the few times Stick of Truth feels out of step with its TV counterpart. 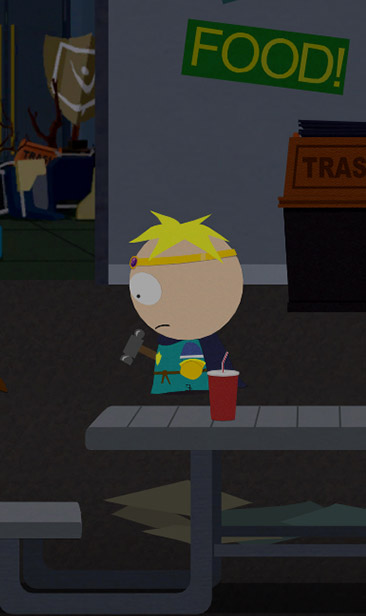 Obsidian smartly doesn't confine these powers to battles, you're also able to use them at will throughout the town. This has applications in puzzle solving (fart on a candle to create an explosion that clears a roadblock) and occasionally allows you to bypass combat encounters by using the environment against your enemies. You'll also use them to access hidden treasures like the 30 Chinpokomon toys hidden in the game. This is both a lot of fun and helps stitch the narrative to the combat, making them feel less like two completely separate entities.

But as well constructed as the mechanics are, Stick of Truth work so well as a South Park vessel because it puts the story first. Without spoiling anything, the boys' game soon triggers a crisis that threatens not only the town of South Park but the planet itself. Along the way, it manages to introduce a dizzying number of major and minor character from the show's long history. These aren't just references for references sake though — they always make sense in context and even a lapsed South Park fan like myself had no problem keeping up.

Obsidian has also lovingly channeled the series' anarchic, almost militaristic irreverence (I hesitate to say "offensive" since that's very much up to the viewer or player). Homosexuality, racism, religion, abortion, pedophila — practically nothing is off limits and I'm frankly amazed at what made it past the ESRB. I was also kind of delighted.

In a world where most games seem terrified to push the envelope, The Stick of Truth pushes it off the floor, eats it and then vomits it onto a crowd of horrified onlookers. In a AAA environment where homogeny reigns, it's kind of thrilling to watch. It doesn't hurt that the execution is almost uniformly hilarious. But that execution is much less uniform technically speaking. One glitch halted my playthrough for two days as Ubisoft and Obsidian tried to find a solution. I was told I was the only reviewer who ran into my particular issue and the game is still being patched up to release, so I'm hopeful this was an isolated incident. 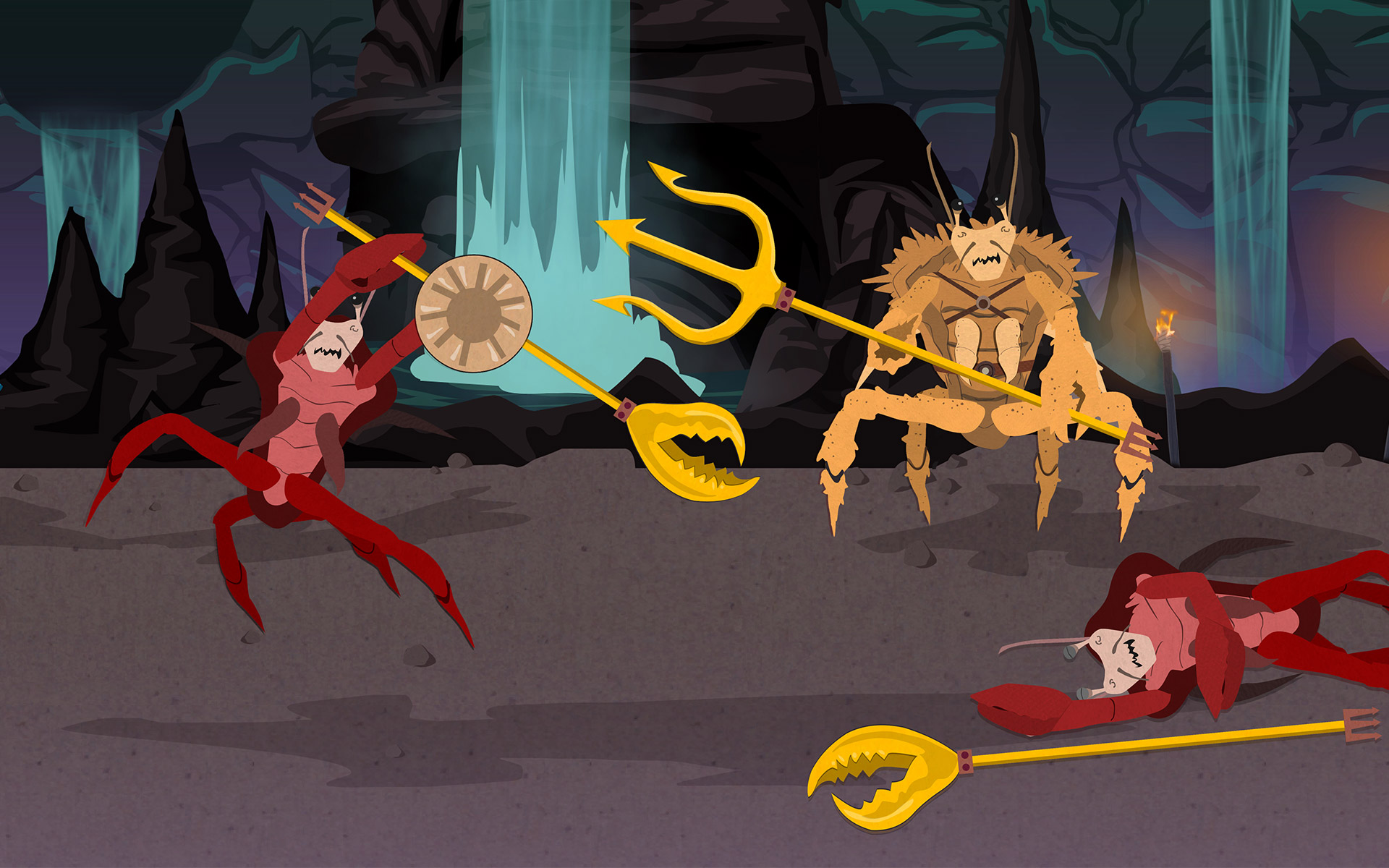 When I ran into a save issue while playing the game, I started talking to other reviewers and journalists with access to The Stick of Truth about what they’d experienced while playing. Here’s a collected summary:

Ben Kuchera, Polygon (PC): A glitch where he was unable to unequip his bow-and-arrow, disappearing character models.

Jim Sterling, The Escapist (PC): A bug with executing a buddy command that temporarily halted progress.

Though there were no shortage of issues, most agreed that the bugs didn’t hamper their overall experience. That said, whenever a game has such widespread and disparate problems, it’s a worrying indicator that there might be more serious issues that appear when the game is rolled out to a larger audience.

It's a testament to The Stick of Truth that my enthusiasm for the game didn't dim in the face of those hiccups. Despite them â and the jokes that occasionally run out of steam â this is an experience that even the most casual fan of South Park is going to get something out of, and one of the truest translations from screen to game I can recall. At the risk of belaboring the metaphor I started with, other developers have painted Cartman's face on a stock car. Obsidian has ripped out the pistons and swapped in the still-beating heart of South Park. Other games treated the world Matt Stone and Trey Parker have crystallized over the past two decades as a prison they have to escape from. The Stick of Truth happily confines itself to that world, and manages to build a comfortable, hilarious home of its own.

South Park: The Stick of Truth was reviewed using a pre-release Steam key provided by Ubisoft. You can find additional information about Polygon's ethics policy here.