Share All sharing options for: Batman: Arkham Knight coming to PS4, Xbox One, PC in 2014

Batman: Arkham Knight will take place in larger Gotham City, one year after the events of Batman: Arkham City. The game will feature a drivable batmobile and, like previous entries in the franchise, include a cast of villains like Penguin, Scarecrow, Two-Face and Harley Quinn, who will be a playable character for those who pre-order the game.

"We kind of feel like this is the natural end for this story," said a developer in a video accompanying the announcement in Game Informer. "We really want to go out in style."

The game will not include multiplayer, game director Sefton Hill said.

"It's going to take all of our effort for all of this time," Hill told Game Informer. "We don't have the time to do multiplayer. We want to focus on making the best single-player experience we can."

According to Game Informer, the game's title, Arkham Knight, is not a reference to Batman, but a new hero entirely from DC and Rock Steady.

Update: An image that accompanies the game's listing on GameStop's website shows an Oct. 14, 2014 release date for Batman: Arkham Knight. Polygon contacted WBIE, who declined to confirm the release date. The GameStop image also states that Harley Quinn is playable in four challenge maps with "her unique weapons, gadgets and abilities." 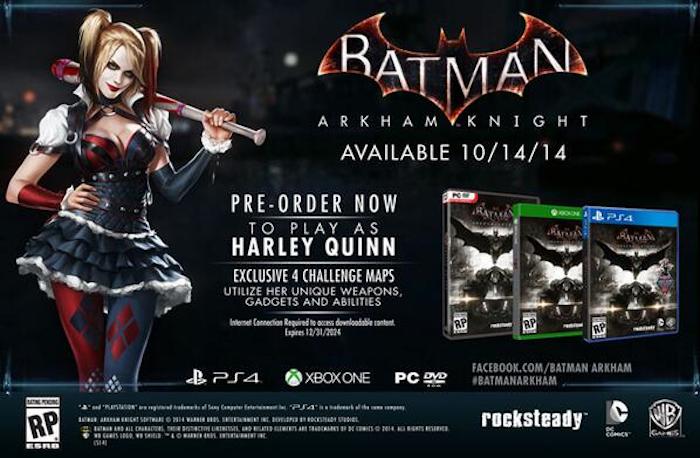