The very first time I tried to load a match in Basement Crawl, the game crashed. I should've taken that as an omen. Basement Crawl is a broken game.

It's not just unpolished, though it is filthy with technical glitches. Basement Crawl fails on a fundamental level, with flawed basic design and incredibly limited gameplay. On a surface level, it mimics the chaotic multiplayer games of the late 90s, but it barely functions.

Basement Crawl is an action-puzzle multiplayer game with a dirty, horror-inspired aesthetic. You play as one of four deranged characters — an evil teddy bear, scary clown, amputee crash test dummy in a wheelchair and a killer woman — and run around in isometric battlefields, throwing bombs at one another across corridors and around obstacles.

Each character has a special skill — And there are power-ups on the battlefield — tokens that allow you to inflict double damage with your bombs, for example. But none of these features matter much, because the action in Basement Crawl is incomprehensible.

Basement Crawl is multiplayer-only, with no tutorial. My only option was to jump online with the hope that I could adjust quickly enough to its mechanics. But Basement Crawl lends itself poorly to this approach, with a manic pace and terrible UI. Since there are only four characters, and 8 player matches necessitate at least some doubling, I often lost track of who I was controlling in the heat of battle. Every time I died and spawned on a random point of the map, I lost precious seconds trying to figure out who I was. And the onscreen indicators are useless.

Basement Crawl's isometric perspective makes for camera problems and issues with hit detection. I can't count the number of times I got caught on the edge of a box. It also makes it difficult to tell where some of the bombs are — especially in the top and bottom corners. There were also times I was sure I was on a "safe" grid, but the bomb I was supposed to be clear of still blew me to bits. 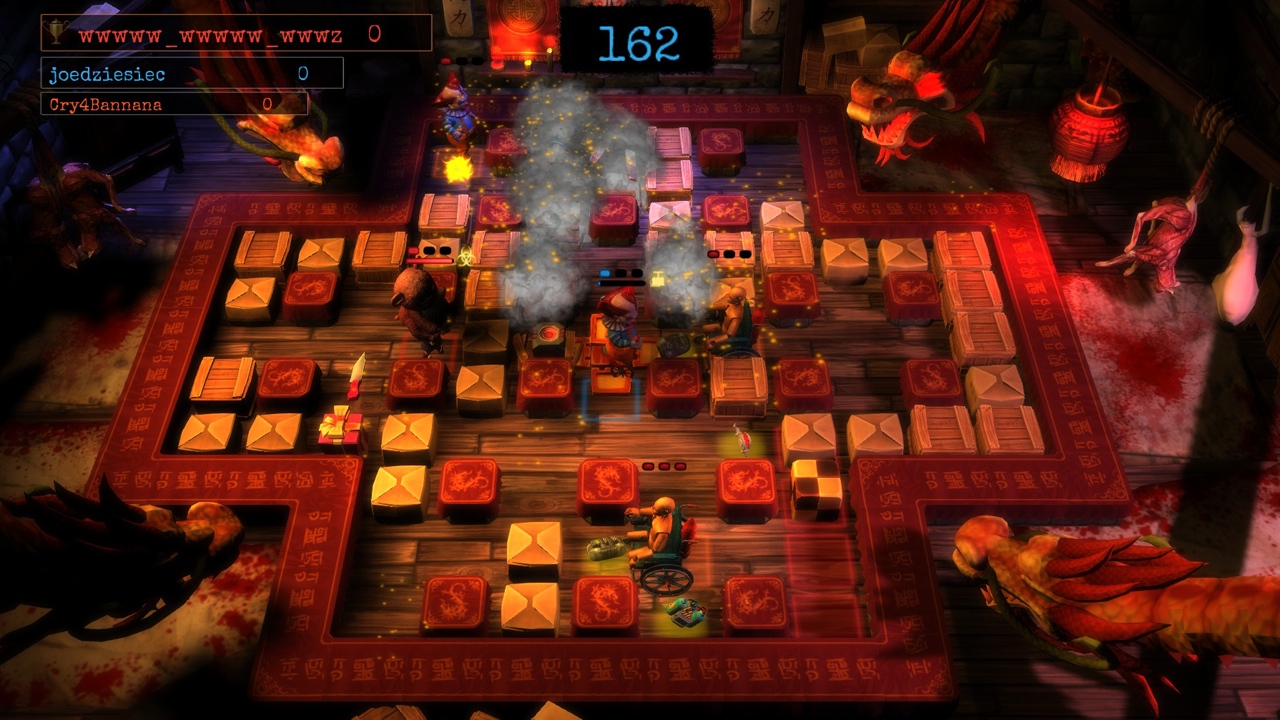 Basement Crawl is going for a creepy grindhouse aesthetic. But it's far more disturbing than cheeky. The game opens with a cutscene of a young girl asking her grandmother if she can ever leave the house. The grandmother assures her that the only other things in the world are bad and evil. Then the grandmother is apparently killed, and the four main characters arrive to fight over the little girl and claim her for their own. It strongly implies violence against women in a way that's flippant and gross. It feels like a tone-deaf game story from 1997. 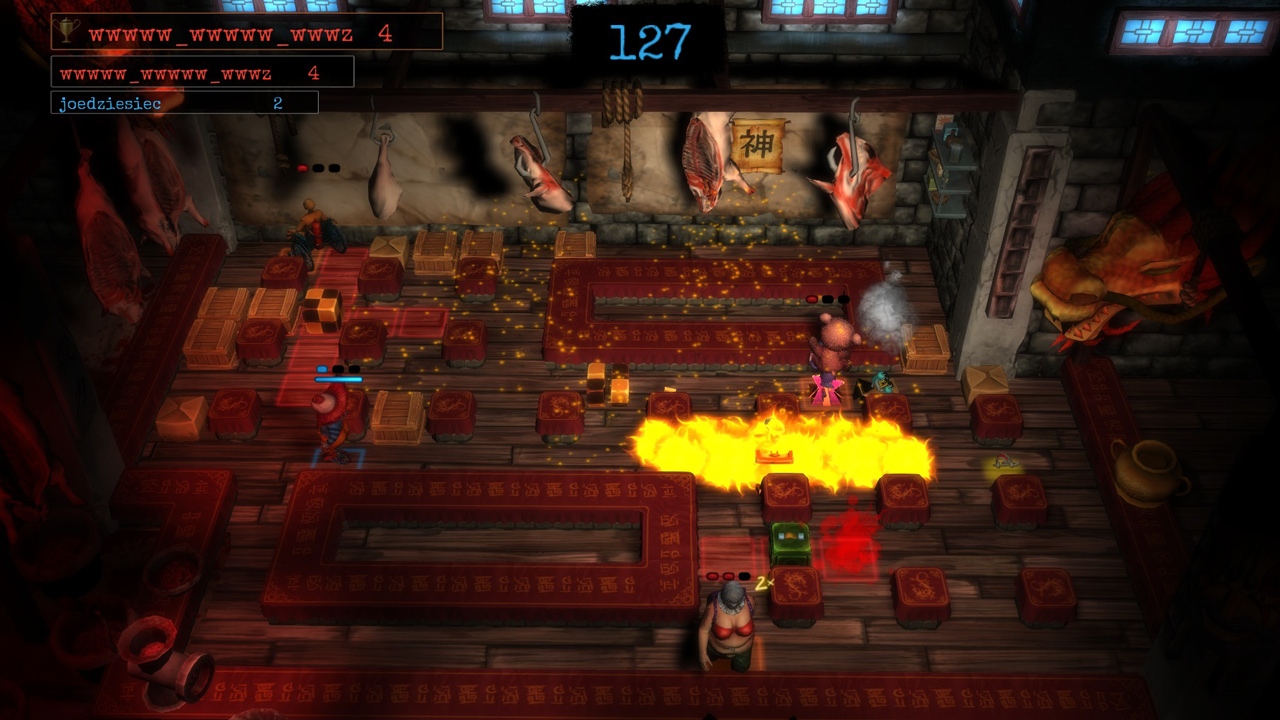 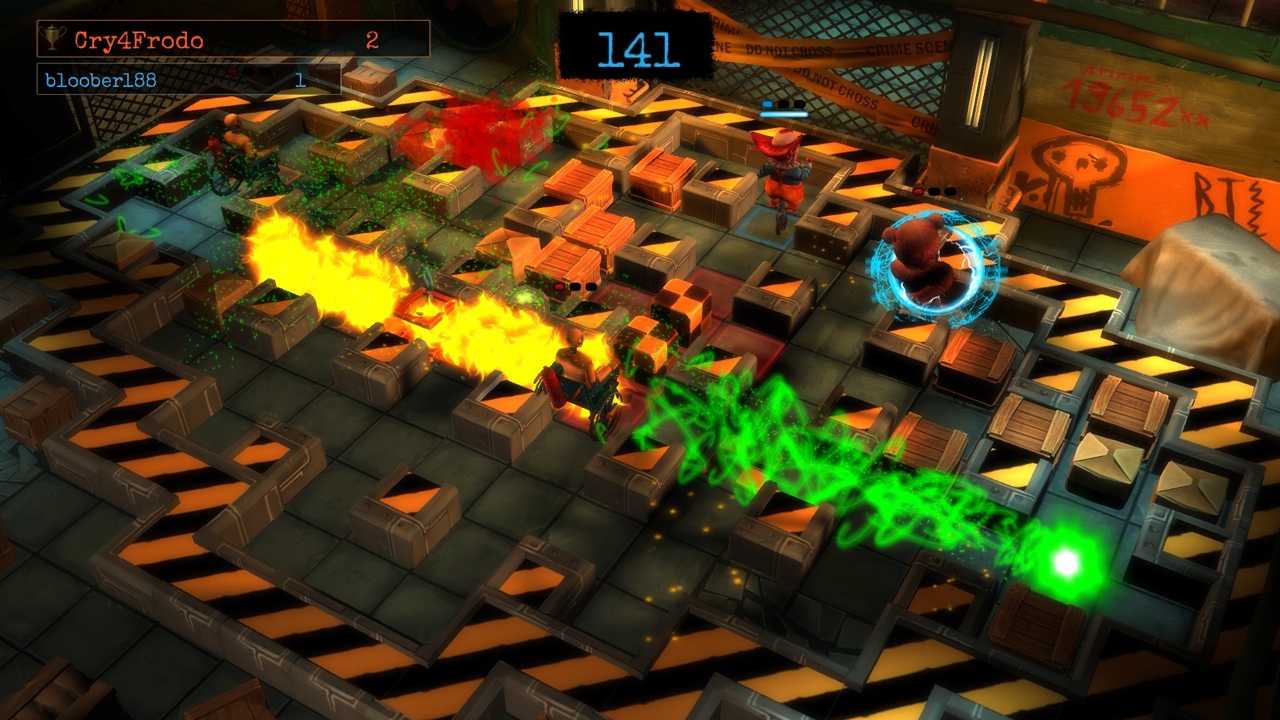 All of these technical issues make the game unplayable. I "played" several matches where my character didn't spawn on the map at all — I just watched two players go at it, and still had my ranking at the end of the round. Characters popped in and out of view constantly, and I had difficulty finding matches for long stretches of time.

Even when Basement Crawl is functioning, it's incredibly limited. Once you've played one match, you've seen everything there is to the game. There's no depth to the mechanics and no incentive to keep playing. While players can progress in rank, and supposedly earn powerful perks, I couldn't figure out the system. There was no reference to how or why anything ever happened in the game — just arbitrary chaos, and an ineffective "help/FAQs" screen that offered little explanation.

Basement Crawl is incredibly frustrating, because this kind of game deserves a revival. The contained chaos of a hyperactive action-puzzler suits online multiplayer, and if the core design of Basement Crawl were up to snuff, this could've been it. But the game can't even get its basics right. Developer Bloober Team has promised to address some of the issues with the game, but as it stands, Basement Crawl is a trainwreck.