Yaiba: Ninja Gaiden Z: and now for something completely different

Share All sharing options for: Yaiba: Ninja Gaiden Z: and now for something completely different

Team Ninja and Spark Unlimited expect negative backlash for Yaiba: Ninja Gaiden Z when it launches later this month. And they are completely at peace with it.

A jarringly huge departure from the main Ninja Gaiden series, the game tells the story of Yaiba, a smart-mouthed ninja who is mercilessly cut down by franchise hero Ryu Hayabusa and then made into a cyborg powerhouse. Yaiba meets the comically large-chested Miss Monday, who guides him through a zombie-infested world on his quest to exact revenge on the organization that rebuilt him.

But the Ninja Gaiden in Yaiba's DNA extends only so far as the developers' desire to create a challenging combat system. While battling is reminiscent of other Ninja Gaiden games, it's not the same, nor is it an iteration — it's only Ninja Gaiden in that it involves players taking on loads of enemies at a breakneck pace. Everything else is something completely different — and this is what Team Ninja and Spark wanted.

"We wanted to set this apart from the traditional Ninja Gaiden series, and I think the visuals, the cel-shaded graphic novel style definitely draws that clear distinction between the super-realistic Ninja Gaiden and this," Spark creative director Tom Lee told Polygon. "And it also complements the tongue-in-cheek humor and the grindhouse, gonzo style of this game." 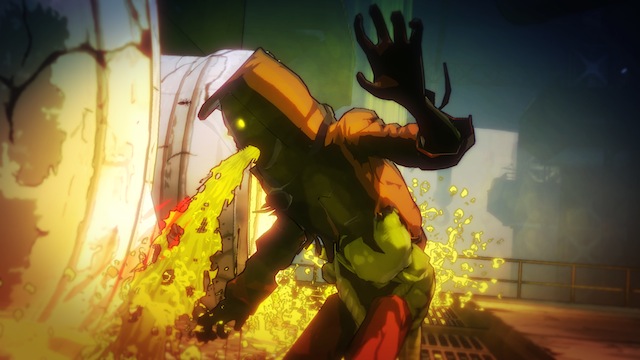 There is a lot of toilet humor in this game, in addition to the more risque shots of Miss Monday's cleavage and Yaiba's somewhat degrading nickname for her. In one instance, a toxic zombie stumbled out of a sewer and began vomiting all over the area. For an entire, uninterrupted 20 seconds. This was followed by several minutes of Yaiba hacking and slashing his way through zombies, vomit and bile and blood flying everywhere in cartoon-like splatters, combat punctuated by extremely discomforting squelching zombie sounds and the trickle of sewer water.

But rather than take away from the outlandish stylization, sexist treatment of Miss Monday and cursing protagonist, this grossness complemented it, painting a no-holds-barred we-know-we'll-offend experience not unlike an episode of South Park. According to Lee, humor is not an element Team Ninja has been able to explore before, making Yaiba the platform with which to do so. For its first attempt to make people laugh, the developers haven taken an over-the-top approach, knowing full well some players really aren't going to like it. 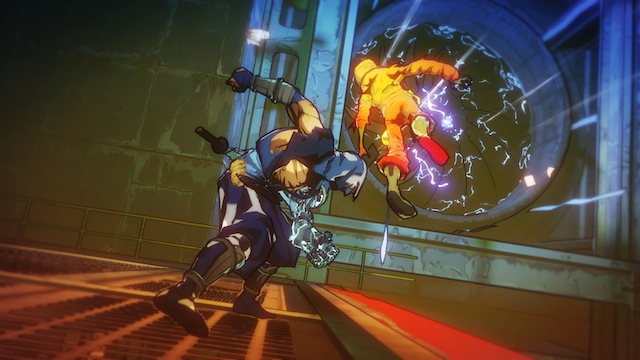 These "grindhouse cartoony, Japanese cinema-esque" visuals for Yaiba, according to senior associate producer Charles Babb, are just the icing on the cake for what is Team Ninja's first real departure from the traditional Ninja Gaiden games. Yaiba and his story were created not out of a desire to provide a tasteless male-catering hack-and-slash adventure, but to just do something completely different tackling a different kind of humor and tone.

"I think it all derived from the fact that this opportunity came about, and obviously this is sort of a collaboration title for us with Keiji Inafune and Spark [Unlimited]," Lee added. "And it was an opportunity for us to break out of our traditions of Ninja Gaiden and do something that was just a bit more freeing, and we wanted to just run with something that we haven't done before.

"It's not a Ninja Gaiden game you should take very, very seriously, obviously."

"We felt like we've been doing what we've been doing for so long and in many ways I think it was time to break out of that restriction," he said. "So maybe it's a bit of an experiment, we weren't sure how far we were going to take it, but we were having fun with it. So it's sort of the result of that. Hopefully people can see that. It's not a Ninja Gaiden game you should take very, very seriously, obviously. It's a nice little detour for us and gives you a look at some of our potential for maybe something in the future as well. It's just a different slice for us."

Zombies, environments, everything down to Yaiba's potty mouth — he lets some pretty excellent words fly just within the game's first cut scene — was designed to be hilarious, not offensive, or terrifying, or gross on purpose. But Lee already knows old-school Ninja Gaiden fans will be offended. In fact, he is expecting them to be. But Yaiba was made to give them a different experience and to draw in a new audience that is into the sex-and-blood appeal of some games, akin to Lollipop Chainsaw and Killer is Dead.

"I'd be lying if I said it wasn't [anticipating it]," Lee said. "I think we're most concerned about hardcore Ninja Gaiden fans. I think it'll take them a little bit before they understand. They might question what the hell this is, you know, in that sense: like, why is he vomiting for 15 seconds straight? And why is this ninja [Yaiba] so talky? Hayabusa is usually the silent, reserved guy and there's not so much chatter going on. But I think the general sort of, the newbies to this game and the broader audience, we're hoping that they appreciate it." 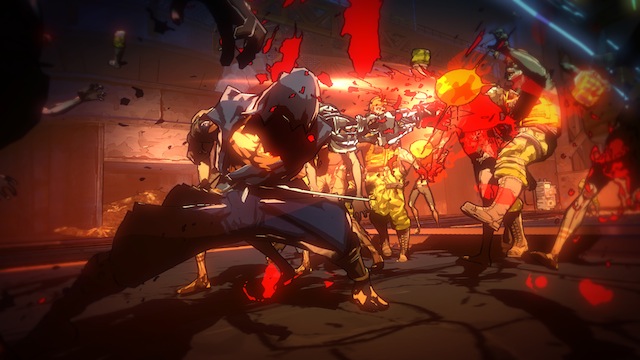 The new combat system for Yaiba includes a few features new to the spin-off. Players can dismantle zombies and harvest their parts for their own use, strapping poison-spewing organs to their backs and even grabbing whole zombies and using them to destroy obstacles and other undead. The animation for the latter is particularly amusing — there's something hilarious about watching a big beefy half-metal man dragging a limp growling zombie behind him, then flinging it into an electrical engine or rock wall. Players can also use electrical, poisoned and other elemental-type zombies for light puzzle solving, determining which kind can be best used to surmount obstacles. These elements prevent Yaiba from being just a generic hack-and-slash.

"We're trying to make the game quite satisfying for any type of player," Babb said. "Casual players can come in and just mow through zombies until they run into one of the higher class zombies and they're like, 'Ok, I got to figure stuff out.' We also have things for people that like to think through games a little bit. We have an elemental system that you get tested on over and over again. So it reinforces what you should learn and how to combine the elements. And we have puzzles that help you get through the game. You have to solve them."

"For the Ninja Gaiden fans I think — and I know that they don't want this to be a dumb hack-and-slash in that sense — but there's going to be plenty of opportunities for them to do their combat in a very smart, intelligent way and also be able to show things off, make it look sexy as they like it to be," Lee added. "I think there's enough for those guys as well. But again, it's all wrapped up in this crazy, candy-coated style."