The second multiplayer expansion for Call of Duty: Ghosts is called Devastation, and it will be released April 3 on Xbox 360 and Xbox One, publisher Activision announced today.

As with all Call of Duty downloadable content, Devastation will be exclusive to Xbox consoles for a period of time, usually one month.

Four new multiplayer maps will debut in Ghosts with the release of Devastation: Behemoth, which takes place at an excavation site in South America; Collision, which is set on a vessel that holds shipping containers; Ruins, an old Mayan temple in the mountains; and Unearthed, a reimagining of Call of Duty: Modern Warfare 3's Dome map. Check out the trailer above for more details.

Devastation will also include the second chapter of developer Infinity Ward's four-player co-op story, Extinction. Known as "Mayday," this episode follows the Onslaught DLC's co-op intro, "Nightfall," and ends with a battle against a 100-foot-tall Kryptid beast, the Kraken. Finally, Devastation will introduce a new tactical weapon, the Ripper (image below), which looks similar to a P90 and can be converted back and forth between a submachine gun and an assault rifle. Owners of Ghosts' DLC season pass on Xbox 360 or Xbox One can start playing with the Ripper today.

The Devastation expansion is included in the $49.99 season pass, and will be sold separately for $14.99. Starting tomorrow, Xbox 360 and Xbox One owners can try the game's multiplayer component for free over the weekend. 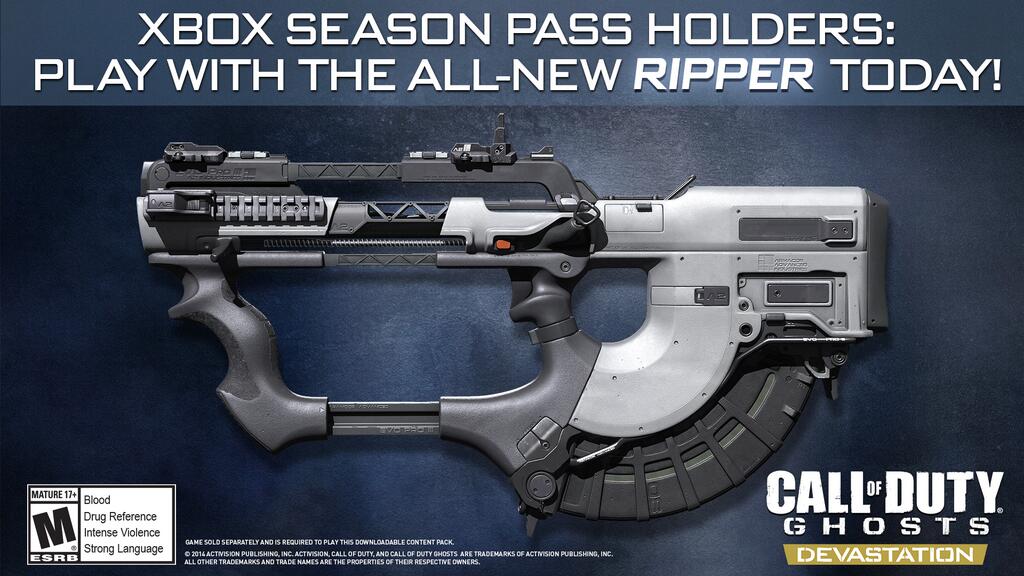 Have you ever considered that Tatooine kinda sucks