Tales from the Borderlands: A Telltale Games Series will star two protagonists, which were featured in the game's debut trailer during the 2013 VGX awards show — though calling them "heroes" might be a stretch.

During a SXSW Gaming panel titled "Two Sides to Every Story - Tales from the Borderlands Unveiled at SXSW," a handful of developers both from Telltale and Gearbox discussed the story of the episodic adventure series. It's set on Pandora, the planet which served as the battleground for the first two Borderlands games — but rather than focus on the plight of the heroic Vault Hunters of that universe, it focuses more on the planet's less adventurous inhabitants.

The two characters featured in the trailer are Fiona, the well-dressed con artist, and Rhys, the cybernetically-enhanced Hyperion company man. The player will control both characters as they recall, in turn, the plot of the game from the future. Both narrators' versions, however, are fish tales — players will quickly notice the discrepancies between the versions of the events presented by Fiona and Rhys.

"You never really play what actually happened, you're playing this Big Fish version of what happened," Telltale's Kevin Bruner explained during the panel.

You'll have plenty of reason to doubt the untrustworthy narration from Rhys and Fiona, as they're both thoroughly greed-driven people — much like everyone else surviving on Pandora. That driving desire also plays into the general tone of the game, and its decision-based gameplay. To put that into context, Telltale's Harrison Pink compared the series to The Walking Dead, where players were constantly forced to choose between the lesser of two evils. In Tales from the Borderlands, players will more often have to choose from the better of two extremely desirable options.

In terms of tone, it should come as no surprise that Tales from the Borderlands will try to preserve the humor of the core franchise. That tone is something of a departure from The Walking Dead and The Wolf Among Us, but Bruner is quick to point out that the studio is rooted in comedic series like Sam & Max.

"We've got all this pent up comedy in boxes around the studio that we've been wanting to unpack," Bruner said. 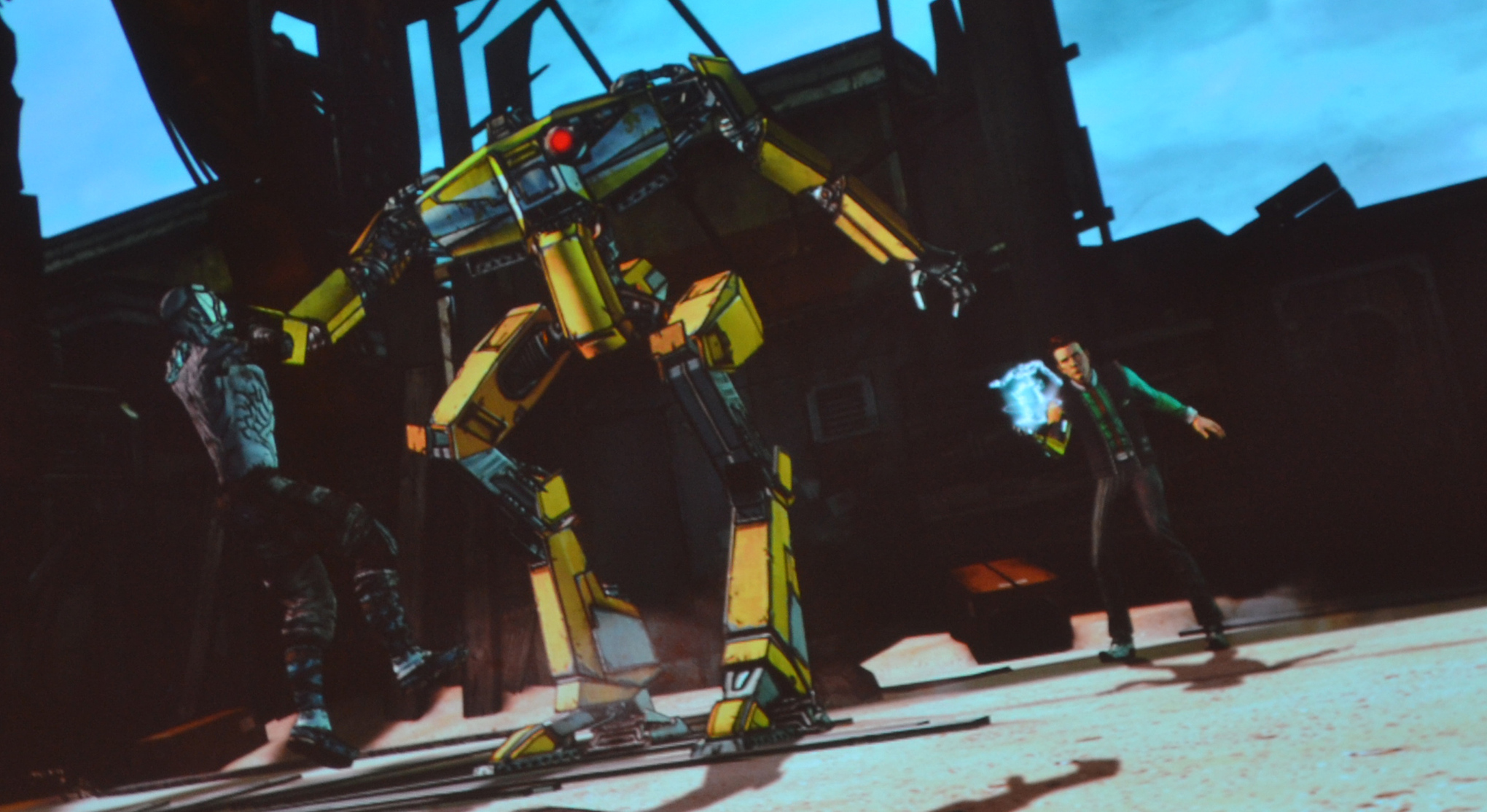 No gameplay footage was shown off during the panel, and the game's mechanics went largely undiscussed. However, Pink revealed that there would be shooting segments in the game, "just in a Telltale kind of way." The game's two protagonists have their own unique skills that players will leverage throughout the series, including Fiona's hypnotic, snake oil-selling fast talk, and Rhys' robotic arm, which he can (and frequently does) use to hack impeding electronics.

Though it wasn't shown, it sounds like the game will possess the same mix of traditional adventure game mechanics and light action elements like those seen in Telltale's The Wolf Among Us.

"It's a Borderlands game, there has to be crazy stuff going on," Bruner said. "I'm glad that people recognize it in [The Wolf Among Us], because figuring out how to do action and storytelling at the same time has been tricky to do without reverting to a traditional, run-around video game. We want to keep things cinematic, and have action sequences tell stories. We got better between Walking Dead and The Wolf Among Us, and I think we'll get better as we move into Borderlands, because you have to have crazy, over-the-top action scenes, or it's not a Borderlands game."

However the game shakes out, Tales from the Borderlands will be a canonical entry in the series following the events of Borderlands 2. Characters from past titles will make an appearance, but the game is centered more around the other characters in the world of Pandora. It's a way of enriching the universe, reminiscent of the (similarly titled) Star Wars short story compilation, Tales from the Mos Eisley Cantina, according to Gearbox writer Anthony Burch.

"The cool think about Mos Eisley, or any kind of expanded universe stuff like that, is, 'Let's tell a story in this universe that's not specifically about the world savers, it's not about the badasses doing badass things — it's about schmos trying to get by,' and that makes the world feel much more real," Burch said.

Update: Telltale has now posted the full panel on its YouTube channel. You can watch the video below.