Eating farmers and blowing up chickens in Nekro

Share All sharing options for: Eating farmers and blowing up chickens in Nekro

Nekro is a violent and sometimes gross game, but its bloodbaths feel strangely playful.

Created by darkForge, the upcoming action role-playing game mixes dark humor with over-the-top gore to create a game that strikes a chord somewhere between Kill Bill and a disturbed animated cartoon. Farmers groan about how they should have stayed home as you beat them senseless; pigs and chickens make for accidental collateral damage if your aim is poor.

The Kickstarter-backed title, currently expected to launch in "mid-to-end April" on Linux, Mac and Windows PC, draws together elements from titles such as Dungeon Keeper, Myth: The Fallen Lords and Diablo, but fades these concepts into a "big soup" to differentiate itself, according to lead designer Scott Thunelius.

"It doesn't look and feel like a lot of other games I've played," Thunelius said. "[...] Mechanically, it draws from a lot of different games, but it never actually simulates any one of them. It separates itself by doing what none of the other ones did, but also staying close to home in that it's recognizable and familiar."

I recently spent some hands-on time with the game's beta. After equipping my character with a class, or power set, summons and trinkets, I navigated a series of farm-filled levels. My time in each area was typically tacked to an objective: kill this boss, or clear this field. Enemies bounced into my path to stall my progress, but were quickly eviscerated in a bloody explosion — the kind that vaguely resembled globs of cartoonish jam. If I didn't completely destroy the body, I could munch on the leftovers for a boost.

"You're evil, but everyone else is more evil."

Thunelius describes the game as "adorable but creepy," and it's an apt phrase.

My demo of the game included three power sets — the healer-type Alchemist, grenadier Grimm Keeper and brawler Outcast — with more coming as the game nears launch. Each offered a different style of play in terms of attack style and range capabilities, though I gravitated more to the Outcast's abilities. With a quick click, I was able to hook and yank enemies in for devastating melee strikes, or cause heavy damage with long-range attacks.

Nekro's multi-class structure wasn't always so, but evolved from a single option because it "was lame," Thunelius said. Expanding on the game's original alchemist class wasn't difficult in terms of creativity, but posed a challenge for the game's story.

"We had this character that was being described as this alchemist, and so it didn't really work out with having different classes," Thunelius said. "What we did is just make them what we call Power Sets in that the Nekro can basically take on the form of these different demonic spirits, despite still being the same person underneath it." 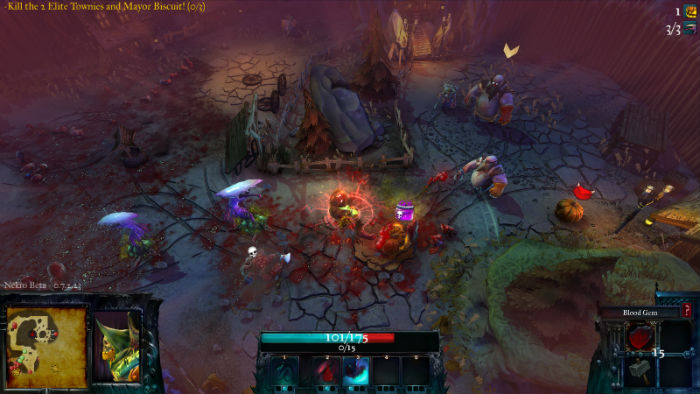 That person is a once-normal guy seeking revenge for the death of his wife. After making a powerful pact with a being of the shady variety, he gains the power of a necromancer. His character is both sympathetic and monstrous in his pursuit, which Thunelius says is an intended duality.

"You're evil, but everyone else is more evil," he said. "There's no such thing as good in this land. This is just corruption that runs rampant."