It's difficult to describe the Tomodachi series, and Bill Trinen knows it.

In fact, when Nintendo of America's director of product marketing first got his hands on a Westernized version of the previously Japanese-only Nintendo 3DS game Tomodachi Life, he wasn't sure he was going to get into it. It wasn't until he started playing the game, which corrals Mii characters together and lets players watch then interact and interact with them, that its appeal dawned on him.

"The thing that surprises me about Tomodachi Life is how it gets its hooks in you in unexpected ways," Trinen told Polygon in a recent interview. "You know, when I first started playing the game, I was a little unsure of whether or not it was going to be the kind of thing that I would really enjoy. Very quickly, I found myself constantly pulling out my 3DS to check on my island and my Mii characters and see what was happing with them. It was really strangely compelling."

On June 6, Nintendo 3DS owners will get the opportunity to experience the game that hooked Trinen when Tomodachi Life is released in the West for the first time.

In Tomodachi Life, players populate their game world with Miis, who inhabit an island, develop personalities and go about living their virtual lives. They become friends, have dreams and even start romantic relationships. Players peer into their lives playing minigames with them, feeding them and more. Your role, from the outside of a 3DS, is to observe and react to their world, help them out and watch what happens.

The more Miis you collect — from those already on your system to those that represent your friends and family to special Miis Nintendo will offer — the more interaction there will be. And, Trinen believes, the greater the connection between player and Mii, the more interesting Tomodachi Life becomes.

It isn't quite a simulation game, though it might remind you of The Sims. It's not an Animal Crossing game, but it's something like a close cousin. Tomodachi Life might not even be a game, Trinen said — at least not in the traditional sense.

"What's interesting about it," he said, "that it's not really a simulation. You could hardly even really call it a game. It's really its own living, breathing world, and it's a place where Mii characters — particularly Mii charters of your friends, your family, people you know, potentially even your favorite celebrities, if that's who you decide to put in there — come together in this living, breathing world and experience life in incredibly whimsical, amazing and unexpected ways." 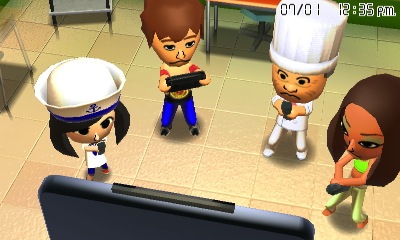 Trinen told Polygon that Nintendo, as a worldwide company, is always looking for ways to create gameplay that appeals to the entire world. At Nintendo, that process behind with interaction.

"Our development teams are always looking at gameplay and games from the perspective of what the interaction is," he said. "The interaction for us is first and foremost, and we always are looking at how we make that interaction be as universal as possible.

"In a Mario game, the interaction is really about running and jumping, and that's something that everybody is familiar with and has done in their youth — some people still do it today, even though they're adults. Whereas, a game like Pikmin, for me, is another good example. The connection that you develop with those Pikmin characters as you grow them and propagate them. and the complicated nature of your connection to them — you then use all these Pikmin that you've grown in battles and end up loosing some. It's a bit of a conflicted relationship you have with the Pikmin, but is something that is very much universal to anyone who plays that game. And then, of course, just the simple action of throwing the Pikmin, pressing the button to throw individual Pikmin and seeing that action on screen is just something that's universally fun and exciting for people.

"When we come to Tomodachi Life, it's really that idea of, 'What if everybody you say in those funny videos on YouTube were actually people that you knew, and those crazy things that were happening were happening to people that you knew?' We can see just from what's going on on YouTube that people love watching those videos. We kind of felt that being able to see your friends and your family and these funny factions that happen between them or these funny incidents that they find themselves in, is soothing that would be universally appealing as well."

Nintendo's worldwide development teams have been creating versions to break the Japanese barrier for "a very long time at this point," Trinen told us, and the unique series posed several challenges for Nintendo.

The first game, Tomodachi Collection, was released in 2009 for Nintendo DS. Tomodachi Collection: New Life arrived for 3DS in Japan last year. Part of the reason that neither game found its way to the rest of the world is because the characters in the game can speak — and having creating speech in Japanese is easier than other languages.

"They have these quirky voices, and you can adjust the voice for any character you want," he said. "You can adjust the pitch and the tone and things like that. So the first step was actually getting that to work well in English. Japanese being a phonetic language, it works very easily. English, it took a lot of work."

The development team in the U.S. has been working "over the last several years" with the Japanese development team to create the voice component in non-Japanese languages. It's an important part of the system, Trinen said, because voice offers a way for players to bond with the Miis they observe.

"Being able to hear them speak is a really key point of their personality, and hearing all the different voices and accents they have is also a very key part of how they come alive."

Taking the Japanese foundation and Americanizing it began with the belief that Tomodachi Life's gameplay was universal but needed to be tailored to regional audiences. The very things that Miis and players do in the original games were developed with Japanese players in mind. Developers identified the "key moments" beyond language that needed to change.

"The process is one with this game that was very similar to the original Animal Crossing localization process," Trinen said, "where it was really taking a look at what are those key moments, and [asking] 'How do you bring them to live in a way that's relevant to the American consumer?'"

Though sumo wrestling might be known in other regions, he said, it's unlikely to have the same impact on a player in North America as it would in Japan. Thanks to the North American localization team, the spirit of that original minigame — a two-player contest — will exist in the Western release, but it'll be replaced with American football. Sushi still exists in the North American version, and you'll be able to feed a hungry Mii with that quintessential Japanese dish, but exotic Japanese juices will be replaced with those more familiar to the domestic audience.

"There was a lot of back and forth over what's really going to be food that people are going to love to give to their Mii to see what kind of crazy reaction the Mii has to this particular food item that you've given them," he said.

That process doesn't end in North America. Nintendo's European localization teams will tailor the game to the preferences of their geographical locations, too.

At its core, Trinen said, Tomodachi Life is about interaction between the Miis in the game — particularly celebrities, friends, and family members players already know in the real world — and the players who peer through their dual-screened handhelds at them. He believes that adding personalities to once-static Miis, watching the behavior that emerges and interacting with them isn't a brand of fun subject to geographical boundaries.

"The game is really very much about creating these Mii characters, seeing how their personalities develop, seeing how they develop connections to the other people, the other Mii characters in this game world," he said. "And what's particularly fun is when you see a group of people who perhaps you all know, but who normally in your everyday life wouldn't necessarily mingle together, and you see the unexpected things that happen when you throw them all together into the same pace.

"It's something that's very new and very different and, I think, unique in a way that only Nintendo can create."