On eve of PAX East, organizers promise to start the rebuilding of trust in Penny Arcade

Share All sharing options for: On eve of PAX East, organizers promise to start the rebuilding of trust in Penny Arcade

Penny Arcade Expo, once a place where people could go to revel in the shared interests of board games, table-top games and video games, doesn't feel as welcoming as it once did.

The show and the brand was tarnished last year by a series of social media storms sparked by insensitive and transphobic remarks by a founder of the more-than-a-webcomic brand.

Penny Arcade's fifth east coast expo, tickets for which sold out the day they were made available, kicks off tomorrow in Boston. The show is their first chance to publicly start trying to repair the damage they caused to their brand and community.

"I really do believe we're done with these incidents," says Robert Khoo, the business manager for Penny Arcade, whose expositions are a uniquely populist force in video gaming.

"These incidents" would refer to the two firestorms co-founder Mike Krahulik set off last summer: a transphobic-fueled Twitter argument over gender identity, and Krahulik's reignition of a four-year-old rape joke made by Penny Arcade's titular comic strip. Both matters provoked intense outrage and indignation, particularly within the independent games development community that Penny Arcade's expos have steadfastly supported.

Krahulik himself promised to change in a New Year's resolution he made public. PAX East is the first, best opportunity to rehabilitate Penny Arcade's image with deeds and not words. It will also be an expo that feels the weight of Krahulik's misdeeds; with so many public calls for developers to distance themselves from a show that is seen to have a voice endorsing the kind of base insensitivity by which video gamers are often stereotyped.

Some of these developers are still going. But they have misgivings.

'I really do believe we're done with these incidents.'

"The publicity the Indie Megabooth gets every year is really, really good," said Elizabeth Sampat, an independent designer and one of the voices last year saying her colleagues should abandon PAX. "The people who run the Megabooth are fantastic, and want to support indie games. But the problem is the booth is going to PAX. The problem is you're at PAX."

The problem's tendrils reach all the way to Australia, and back to 2010. Last June, the forthcoming PAX Australia was to host a panel discussion on the scrutiny of video games' depictions of race and gender norms. Its defensively worded description ticked off a lot of people. "Any titilation gets called out as sexist or misogynistic," read the panel's original wording (later changed) "and involve any antagonist race other than Anglo-Saxons and you're a racist."

It read like a flippant excuse for institutional racism or sexism, and a lot of people tweeted that at Krahulik. The resulting Twitter conversation swiftly devolved, with Krahulik adding some supremely inflammatory thoughts on gender identity, seemingly missing the point that the original talk came off as an echo of the much bigger industry issue of institutional marginalization.

It was a mess.

The Fullbright Company, makers of the acclaimed Gone Home, publicly declared it would not exhibit its game in Seattle at Penny Arcade's main expo in September (PAX Prime), citing "long-held reservations" about Penny Arcade. Some of those misgivings stemmed from a controversy in 2010, the name of which is absurd to say aloud.

That is a joke the duo behind Penny Arcade made in a 2010 strip. The Dickwolves are monsters whose victims are "raped to sleep." Making sexual assault into a punchline.

Their response was a seemingly insincere apology, and then to create and sell Dickwolves-branded merchandise on the site. That only made matters worse. Penny Arcade soon removed the items and the issue eventually cooled off.

Until PAX Prime in September 2013, that is. Asked an open-ended question by Khoo, Krahulik offered that taking the merchandise down was "a mistake." Their audience roared with approval.

'The problem is you're at PAX.'

To some, the moment sent two messages, the first being that Penny Arcade isn't really sorry for any offense it causes, even if it officially expresses regret for doing so. The second, and stronger of the two, was endorsing those who would make the resentful provocation of wearing a Dickwolves t-shirt to PAX.

"PAX is one of the better conventions," said Sampat, noting things like a policy against "booth babes" who are a feature of other industry-led expos. "But the stuff that makes it feel unsafe is the shit that Mike does, like being in the largest auditorium at PAX Prime where he said he regrets pulling the Dickwolves merchandise.

"Where there's a culture or a community that springs up around the art that you make and the person you are, that community can end up valuing both the art and the person," Sampat said. "That's the good and the bad. When it's cool for Mike to say 'Yeah, I wear my Team Rapist' shirt, and one in six women are [victims of sexual assault] that makes it pretty unconfomfortable and unsafe."

Sampat excoriated Penny Arcade and Krahulik after that panel, demanding that anyone of conscience, particularly developers, stop attending any PAX.

"You are giving them something more valuable than money: legitimacy," she wrote. "You are providing the content that people are giving Penny Arcade money for."

Yet PAX East 2014 is an expo where, when asked, indies often say they know someone who is not going on principle, and then either that person is unreachable or none want to talk about it, not wishing to appear shrill or rehashing an old controversy.

Still others are going, despite strong reservations.

"Unfortunately, the show is pretty much the best way to get one's game in front of press and fans," said Christine Love, a writer and visual novelist. "What sucks is that PAX is my only big opportunity to talk to my queer fans. I feel bad about being in the middle of it, but at the same time, I'd feel worse about not being able to see those people. I'm one of a small number of visibly queer women devs showing games there, and I hope that visibility is something that offsets the bad of supporting an otherwise hostile show like PAX."

'The stuff that makes it feel unsafe is the shit that Mike does.'

"I don't think you can get away with a protest like Fullbright's unless you're actually Fullbright," said Love. "They're kind of in a unique position where they don't need the press, but basically anyone else of a smaller scale kinda does."

Miguel Sternberg of Spooky Squid Games last September wrote that "it's clear that PAX is also providing community and an accepting space for some pretty toxic views." Spooky Squid attended PAX East in 2013 but won't this year, though not out of protest.

To Polygon, a marketer of several indie games who asked not to be named, admitted to "bringing them to PAX because it is what the game needs, not what I feel is right. 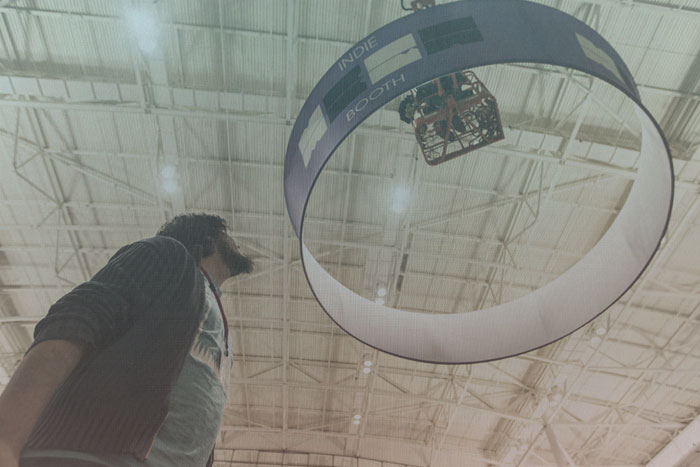 The Indie Megabooth offers a kind of buffer. It began as a collective of 16 developers pooling resources to buy exhibitor space at PAX East 2012. It has since grown to more than 90 participants at the last show.

After PAX Prime, Indie Megabooth offered that it would continue to attend despite its misgivings — and its exhibitors' — in the spirit of a sit-in rather than a boycott. "By increasing your presence rather than boycotting, you force the conversation to happen where it's not," the Megabooth wrote on its official site.

"Every person who shares our ideals, that we remove from the conversation, weakens our position," it said. "In an extreme case, we run the risk of creating an echo chamber for those people who act as a proponent for exclusionary tactics and further isolating ourselves in the process."

There are more exhibitors at PAX East 2014 than there were in 2013, but there are plenty who were at the show last year who have not returned. There could be many reasons for this other than the controversies, chiefly that someone with a game to exhibit last year is working on something they're not ready to show this year.

One person is going to PAX East 'because it is what the game needs, not what I feel is right.'

"We haven't heard exhibitors dropping out because of the controversy, but that's not to say it hasn't happened," Khoo conceded to Polygon. "Publishers drop in and out all the time, and with multiple PAXes throughout the year, they have more options to choose from."

The expo still has tried to project a more welcoming tone with the so-called "Diversity Lounge."

Conceived as a means of highlighting the participation of minority and marginalized persons — lesbian, gay, bisexual and transgender persons particularly — instead it came off to some like a further marginalization rather than a statement of inclusion to the main attendance of PAX.

The lounge has been met with countercriticism that it is a band-aid, more about publicity than fixing the problem.

"At best, it's spectacularly missing the point," Love said, "failing to acknowledge that the entirety of PAX needs to be safer, more inclusive, more welcoming. Not only is it not a helpful approach, it's not even a step in the right direction.

"I'm not here to offset a diversity quota, I'm here to show off my games," she said.

Khoo said the PAX administration felt the lounge "would celebrate rather than marginalize, and I think the high traffic area we're giving it will do just that." He noted that between 10 and 15 percent of the show's panel sessions are dedicated to diversity topics, and that the lounge would feature literature directing people to them. "We're not trying to marginalize people," he said. "We're not trying to do harm here. If it doesn't work, we can certainly adjust it in the future."

But on some level, both sides understand that recovering PAX's spirit as an expo for all gamers is a long term process, and that the sincerity behind that change will be visible only after consistent action, not instant apologies, policies, or diversity lounges.

'I want him to be the Mike he is in his apologies.'

Krahulik, who declined to comment for this story, offered contrite words after 2013's incidents, adding to them a donation of $20,000 to The Trevor Project, a foundation providing crisis intervention and suicide prevention services to LGBTQ young persons. On Jan. 1, he published an essay in which he said "I realize what I am is a bully," and acknowledged that PAX's diversity lounge could be seen "as a stunt of some kind."

Khoo believes, however, that "the new leaf has been turned.

"As his friend I've seen his own personal struggles firsthand," Khoo said. "With that post on Penny Arcade, I feel he now understands the gravity and repercussions of not only his actions and behavior, but also digging even deeper and looking into why he makes the outbursts he does."

Sampat does not doubt Krahulik's contrition, but it's clear she and others expect him and Penny Arcade to be a more proactive voice, and a better angel to video gamers' nature..

"The problems with Mike are when he is under the gun, and in the spotlight," Sampat said. "When he has a chance to compose himself, or he has distance from the situation, he can sort of say the right thing. What I would like to see is, when Penny Arcade fans are being horrible, threatening, misogynist, transphobic people, then I want him to be the Mike he is in his apologies."