Share All sharing options for: Game jams are a cure for jaded gamers as well as developers

Everyone I know that plays games has gone through a jaded period every now and then. Even those of us who are lucky enough to play games as part of our job. It's not a complaint, just a fact that sometimes, a few lackluster games in a row can get you down.

People sometimes talk about these periods on social media as if they've done something wrong; the implication being that if they don't enjoy a popular game, or feel the need to take a break from gaming in general, there is something wrong with them. This is something most of us go through, although it's rarely discussed.

And I may have found a solution.

Game Jams vary in scope and length, but the basic idea is the same: participants have a set amount of time, and the time is usually extremely limited, to make a game on an agreed upon theme or idea. It's a short, intense burst of work with a tangible result. You sit down and focus on creation, and nothing but creation, and come out the other side with a game.

After feeling a little fatigued this winter, I stumbled upon the Cyberpunk game jam. I was wary at first. Though I've been working with Unity since 2009, I've never actually shown anyone my crappy game prototypes before. Nor had I ever made anything that I intended to show anyone. But something — the theme, the atmosphere, a growing sense of "fuck it, I might as well" — made me decide to participate. I ended up making a little proof-of-concept of an idea I'd been messing with for awhile. I thought it would be a fun little exercise, but it ended up revitalizing my love of games.

Participating revitalized my love of games

Even though this particular jam was virtual — we weren't all in a room jamming, just chatting online and submitting to the page — it felt like a warm, creative environment. I learned a lot and felt supported — other folks using the #cyberpunkjam hashtag on twitter were quick with encouragement and even tips when I had scripting brainfarts. At one point, I was struggling to find a simple way to make a 2D "tab switching" effect in Unity. Two tweets later, I had an easy solution. And anytime I was up late, hitting my head against my code, someone from the community would be there to offer a quick "keep going!"

The best part of this model is how inclusive it is — and how easy it is to get involved, even if you don't have tons of coding experience. Twine is an excellent place to start, for folks who have a story to tell, but not much technical experience. Anna Anthropy has a fantastic tutorial for beginners on her site, it's a perfect way to get going with the tool. And Unity (which is slowly taking over the indie development world), which is my personal weapon of choice, is easier to get into than ever. I always point new users to the tutorial section, especially to this little project.

You don't need to devote your life to the tech to make an interesting little game, and everyone will learn something by going through the effort with even the most basic tools.

In the end, I had the satisfaction of putting something functional, and maybe even interesting, out there. I made it to the finish line. And so did 264 other people or teams.

Just looking through the submissions fills my heart with a certain dorky joy. There are hundreds of neon-hued cyberpunk games stretching across every genre that I can play in an instant. There are text adventures, RPGs, action games, platformers, puzzle games, shooters, first-person exploration games and experiments that eschew traditional definition.

Some are terrible. Some are just sketches of ideas, and all of them were thrown together in the ten days of the jam. This is ok — in fact, it's great. Playing a series of half-formed and half-baked ideas in this context is like swimming in a primordial creative soup. Everyone has permission to try something new, even if it doesn't work out.

There are also fully-formed, beautiful games in there too. One of them is Austin Walker's stirring meditation on the nature of corporations and politics, called A(s)Century. It's an interactive speculative fiction piece that fascinated me so much that I played through several times. And then, there were the winners — top ranked games like The Last Night, Protocol and A Logical Dive. Not only were these fun to play and aesthetically interesting, they also motivated me to keep pushing, to put something better and brighter together next time. 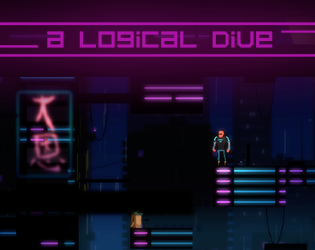 I'm now working on expanding my entry into a full game and I'm looking forward to participating in another jam soon. I have my sights set on the Public Domain game jam, where participants are encouraged to use any public domain characters or stories as inspiration.

It's been five years since I've started playing around with Unity. I still have a lot to learn, especially where it comes to 3D art and animation, and I have a long way to go with mechanics design. But I already feel as if this one little jam brought me ahead. That's why participation is so rewarding; no matter your skill level, you'll learn something. The barriers are lower than you think.

Game jams are one place to go to if you want to feel passionate about games again, and you need less technical know-how than you think to get started. Jamming cured me of my winter doldrums and made me excited about games all over again; it's another way to join the conversation, and you may find that you never want to stop talking.