With our review of The Wolf Among Us: Episode 3: A Crooked Mile, we're trying something new with episodic reviews on Polygon. What follows of something of a hybrid between recap and review and, as such, should not be read by anybody worried about spoilers. You've been warned.

At the beginning of A Crooked Mile, we find Bigby in a pretty dark place. Literally. In a seedy, blood-spattered hotel room the Big Bad Wolf as just uncovered the big bad secret that may just turn Fabletown on its ear. With the discovery of some … unsavory photographs, Crane has just been revealed as Snow's number one fan and the lead suspect for the murderer stalking Fabletown.

What follows is perhaps the most focused episode of Wolf Among Us yet: Bigby must find Crane. But that also makes it the most procedural. There are moments of reflection, but this is the middle of a detective story, and A Crooked Mile feels a little like an episode of Law and Order (or at least the Law part) as a result.

On his way to warn Snow, Bigby stumbles into the funeral for Lily, one of the killer's victims and a troll prostitute taking on Snow's visage through the use of glamors. Bigby isn't a favorite of the Fabletown cast-offs and that reputation is in no way improved by the arrival of the Tweedle brothers trying to scare the sheriff off of Crane's trail. Not wanting bloodshed, I agreed to a deal with the Tweedles, but things still managed to break bad with Bigby and a couple of trolls taking loads of buckshot in the torso. 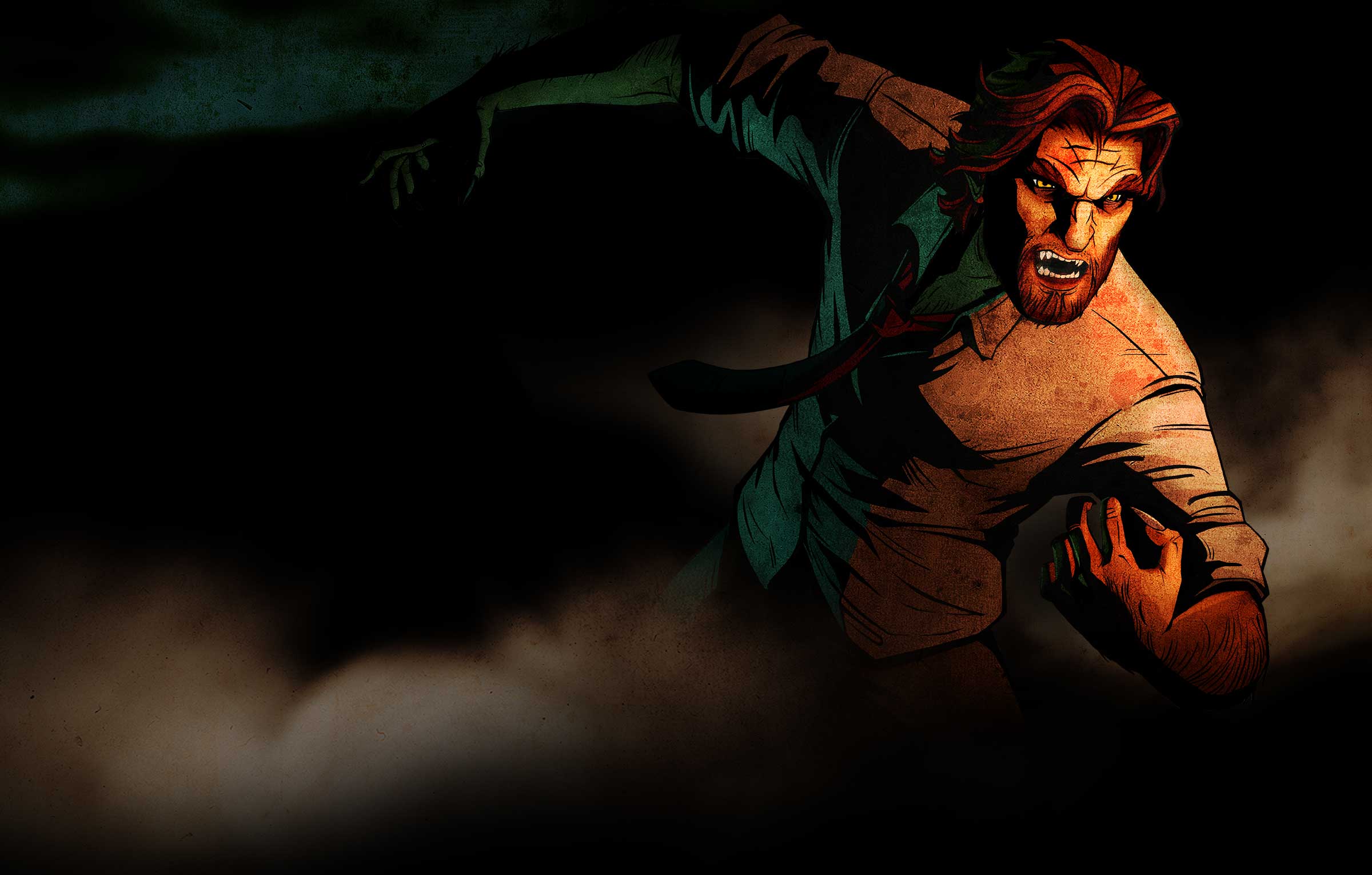 On Episode Two: Smoke and Mirrors

"The carryover in cast is thankfully set against a greater effort by Telltale to set The Wolf Among Us apart from The Walking Dead, my main complaint against Fables' inaugural episode. Happily, in Smoke and Mirrors, The Wolf Among Us begins to develop a style of its own."

"The pace has picked up, for one thing. The Fabletown killer has made it known he doesn't plan to stop at one beheading, and Bigby becomes more personally invested. It charges the whole episode with much-needed intensity."

I can't say for certain, but it seems that things were probably going to break bad no matter which way I responded to the Deedles, which makes the choice seem distractingly illusory. I understand a branching narrative inevitably has moments where the branches run in parallel, but if the choices I make aren't having much of an impact, why do I keep making them?

I ran into a similar situation when I unwillingly split up investigative duties with Bluebeard (always nice to hear Dave Fennoy, even when he's playing a total dick) and chose between three locations to start the search for Crane. I decided on checking out the troll-managed bar first, but ended up going to the other two locations after.

Again, I totally understand the impulse, not wanting players to miss out on any content. But A Crooked Mile overcompensates, perhaps due in part to the challenge of yanking moving parts out of a mystery, which, when they're told well, have to run like clockwork.

In A Crooked Mile we find Bigby in a pretty dark place.

At the risk of contradicting myself, I'm not sure I'd want any players to miss the heart-wrenching scene that played out when I arrived at the bar. The Woodsman and Grendel were attempting to drink away the botched, blood-soaked funeral of their friend, impaired a bit by Gren's discovery that Little Red Ridinghood's savior had been paying the late Lily to have sex with him. 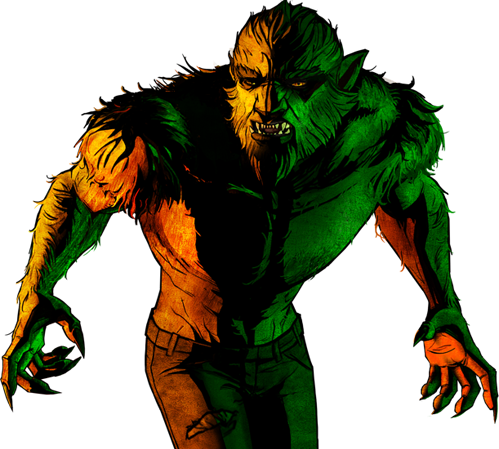 Watching the destitution these lesser-known fables have been driven to has given The Wolf Among Us a really unsettling undercurrent of despair that's a great pairing for the noir tone. It also allowed me to continue my probably futile attempt to repair Bigby's mean-son-of-a-bitch reputation with Fabletown's least-beloved citizens.

I've talked before about the uneasy balance between violence and diplomacy in The Wolf Among Us and its still the central conflict in Episode Three. I've got a natural inclination to play the nice guy, but none of the fables seem eager to throw Bigby a tickertape parade no matter how many good turns he takes. (You know, you eat one preteen …)

At my next stop, the Tweedles' office, I ran into Flycatcher (The Frog Prince, making his first appearance) and, less happily, into an issue that popped up throughout the episode. When Flycatcher asked if I was searching for Dee and Dum, I replied that I was looking for Dee and Dum as opposed to the far more natural "Yup."

Telltale's The Walking Dead may have been just as linear, but the moving parts are far less elegantly hidden here

There were a few instances like that, of responses seeming unnatural that made the story feel a little piecemeal. Telltale's The Walking Dead may have been just as linear as The Wolf Among Us seems to be, but the moving parts are far less elegantly hidden here.

With clues from the bar and the office, I was able to uncover the identity of Auntie Greenleaf, the glamor-supplying witch. The confrontation at Greenleaf's and the decision whether or not to burn her prize magical tree provided one of the toughest choices so far in Wolf Among Us.

With Snow playing the heavy and advocating torching the place, I was forced to choose between siding with her or making the compassionate choice. Snow has proved a convenient moral compass to this point, so putting her on the wrong side of doing the "nice" thing was a really pleasant surprise.

Greenleaf led me back to the The Pudding and Pie, where Crane was working the girls for information on Lily's killer. Before I could get him back to HQ for some more … invasive interrogation, the whole of the investigation was turned on its head by the figurative arrival of the Crooked Man and the literal arrival of his deadly henchwoman Bloody Mary. (The reveal of her identity seemed a little hamfisted in a series that's usually more elegant about gradually introducing new fables.)

By the end of the episode, Bloody Mary and Crooked Man had taken possession of Crane (not without a very welcome action sequence and a little lupine violence). I had also, in a very surprisingly out-of-character bit of impulsiveness, murdered one of the Tweedle brothers. I'm gonna pay for that one, I'm sure. I'm assuming that the duo pulling away in the limo with Crane in tow as the episode ends are the real antagonists of this season, and after such and explosive introduction, I can't wait to get better acquainted.

The Wolf Among Us Episode Three was reviewed using an advance Steam code provided by Telltale Games. You can find additional information about Polygon's ethics policy here.