The Evil Within seems surreally horrific at times, and slightly dull at others

Share All sharing options for: The Evil Within seems surreally horrific at times, and slightly dull at others

There is a duality to be found in Shinji Mikami's reinvention of the horror survival game, or so it seems based on this week's glimpse of The Evil Within at PAX East.

Mikami wasn't present at the demonstrations, nor was any member of developer Tango Gameworks, instead the studio let the game speak for itself.

Attendees got a chance to watch someone play through a small section of two areas of the game. The Evil Within, I was later told, is divided into 14 chapters and what we saw were glimpses of chapter six and chapter ten.

Where one chapter had the player roaming the desolated streets of an unnamed city fighting off what appeared to be a sort of zombie with guns and fire, the other was a look at a much darker, twisted, unsettling world of The Evil Within. The first seemed a bit bland, a little too orthodox for the world of thrillers, but the second delivered something steeped in nightmare horror, barbed wire and gelatinous blood.

The demo opened with Detective Sebastian Castellanos in an elevator that crashes to the floor of what appears to be a partially flooded mall. When he walks outside he discoveres a city in ruin, the earth shaking, wind howling. A slightly grainy film filter and washed out colors highlight the stark feel of the cityscape.

As Castellanos walked through the city, buildings rise up around him on pillars of ground. These walls of broken earth began to form a sort of maze, directing Castellanos through the city. When he entered a broken building, he grabbed a lantern from his hip, holding it up to light his way. Shadows danced around him as he walked forward. Eventually, Castellano found himself squirming through a narrow hallway to get out of the building. 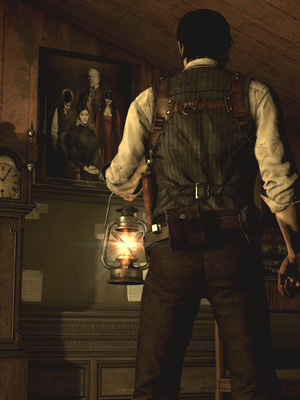 While the early exploration of this first demo was intriguing it didn't really offer many scares. And that didn't change when Castellano found himself facing the game's first enemies.

At first glance, the fireman trudging toward Castellano looked a bit like a zombie, but as Castellano continued to kill these creatures — later he took on zombie-like businessmen, police officers and everyday citizens — it became evident that they were something a bit different.

For one thing, their eyes glowed, they could hold weapons and fire them at Castellano with a sort of lazy aim. Castellano also had to either kill them with an abundance of gunfire, or set them on fire with matches to permanently put them down.

The section was intriguing, but there was no sense of dread, no suspense, no feeling that the player wasn't in control of the situation.

The same couldn't be said of the second half of the demo. The second scene opened with Castellano in a basement of sorts, trapped.

After a second the screen stuttered slightly, flashed red and a large figure loomed out of the shadows in the distance. Impossibly tall and carrying a burlap sack in one hand and an axe-like hammer in the other, the man wore a long work apron and had a small steel safe wrapped in barbed wire where his head should have been.

Speaking with a Bethesda spokesperson later, I was told that this is the Keeper, though they call him the Boxman around the office. When the Keeper is killed he can respawn to another safe, growing a new body out of the safe.

In the demo, the player quickly pulled out a shotgun and blasted the Keeper with the weapon until the creature's body shuddered, collapsed and the safe's door popped open and a blood poured out in thick rivulets.

Running through the dungeon, Castellano picked up some gear from different rooms including a flashlight and what appeared to be gears. The gears, I was told later, can be used to craft ammo for certain weapons. In this case, the player created special bolts for a crossbow that can freeze enemies in an explosion of ice.

Later, we see the weapon in action as Castellano shoots the Keeper with a bolt, freezing him solid and allowing him to blast away at the creature until it collapses.

The Keeper's ability to respawn isn't just used to allow the creature to return to antagonize Castellano over and over again. In one scene, the detective manages to slip away from the creature and finds himself on the other side of a cage from the Keeper.

Undaunted, the Keeper grabbed his the barbed safe on his neck and slowly started to pull it forward, struggling to rend the tendons that attached it to his body until finally it popped loose, releasing a stream of blood and seemingly killing the Keeper. But the gouts of blood that poured from the safe door oozed through the cell bars and then into another nearby safe, growing a new giant body and attacking Castellano.

As Castellano ran from the creature he stepped on a trap, barbed wire shoot from the device, wrapping like steel vines around his leg. After freeing himself, the detective managed to open a vault door and escape through it, closing the door behind him. As the door swung shut on the view of the Keeper, you could see the creature pulling at his head, trying to wrest it free from his neck. The sound of a head popping loose could be clearly heard through the door. Castellano ran, rounded a corner only to discover a safe laying on the ground. As he approached it, it popped off the ground, strands of barbed wire shooting out and grabbing Castellano's face. The safe slammed against the detectives head, barbed wire wrapping around the head until he manages to pull it loose. When the safe fell to the ground, it grew a body and the Keeper gave chase.

Where the first demo looked almost like a standard shooter with zombies and a couple of twists, the second demo was a startling take on horror with a surprising macabre twist.