Hitman Go started life as a slapped together board game at Square Enix Montreal Studio.

"The first prototypes were built on paper with printed out little dudes," said creative director Daniel Lutz. "I played the AI and the other person played Hitman."

Eventually that creation became the iOS game set for an April 17 release, but in making the leap from paper to digital, it managed to retain that tabletop feel.

The game takes place across five settings, each delivered in its own boxed set within the app. All told there are 68 levels to play, all of which are included in the $4.99 purchase price.

The game itself is relatively simple, a sleek, stripped down take on the core conceit of Hitman: avoiding detection and killing targets.

The game plays out in a digital diorama peopled by small figures of different guards, assassination targets, dogs and of course the black-suited, red-tied Agent 47.

The diorama, viewed from above at a slight angle, uses black lines and dots to depict the path all of the characters in the game can take and where they stand each move. A player swipes their finger across Agent 47 in the direction they want him to move and his piece slides to the next dot in the path. Once he stops moving all of the enemy pieces move too. If an enemy piece moves to the spot occupied by Agent 47, the Hitman topples over and the game is over. If Agent 47 moves to a space occupied by the enemy or enemies, those pieces are removed from the board and set aside next to the board. 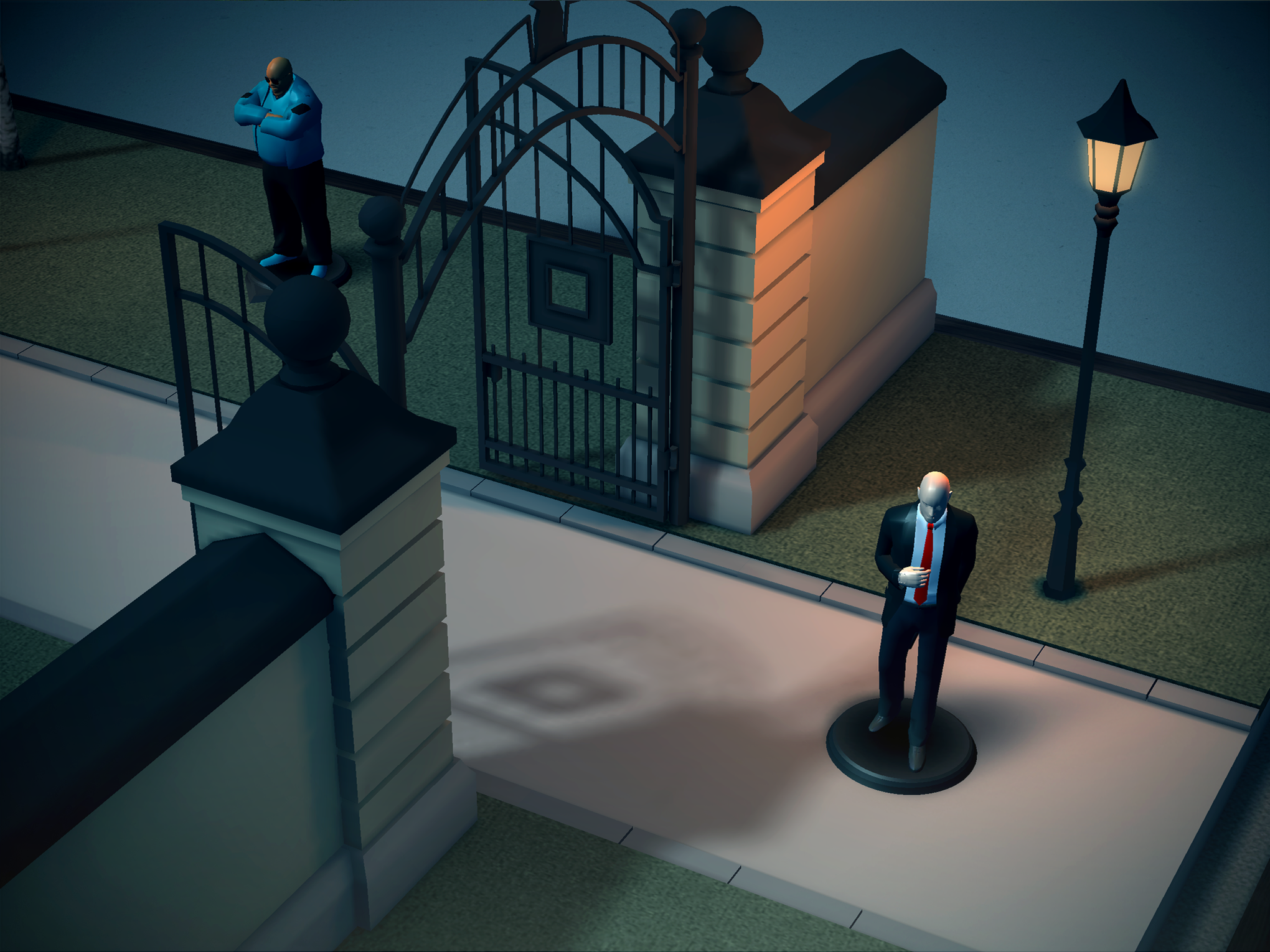 The exit for the level is marked and each level has its own challenge like picking up a briefcase, taking out a target, or just escaping. The player earns points based on completion of the level and other bonuses, such as killing everyone in the level, killing no one in a level or completing a level under a set number of moves.

As the game progresses, the levels become more complex, more special items are added into the mix and the enemies become tougher.

The combination of the realistic diorama aesthetic and the challenging puzzle-like approach make the game very hard to put down, and the difficulty ramps up quickly.

Early on, the game's enemies consisted of yellow-jacketed security guards which always followed the same predictable route in their moves. Then came the larger, blue security guards with more aggressive behavior. Later in the game, I was having to avoid police which could see more spaces away and men with dogs which could not only see me more easily, but track and follow me.

Some levels give Agent 47 a rock to throw to distract the enemy or a disguise that can be used to walk past certain enemies, others give him a sniper rifle or even the Hitman's iconic twin pistol "silverballers."

The 15 or so levels in a set take place across a larger meta diorama that depicts Agent 47's trip through an area as he tries to make it to the game's last set and culminating kill.

Early on, Lutz said, the team decided they didn't want to include any cutscenes or dialog in the game. So to tell the story, or at least deliver a sense of story, they relied on the language of dioramas. 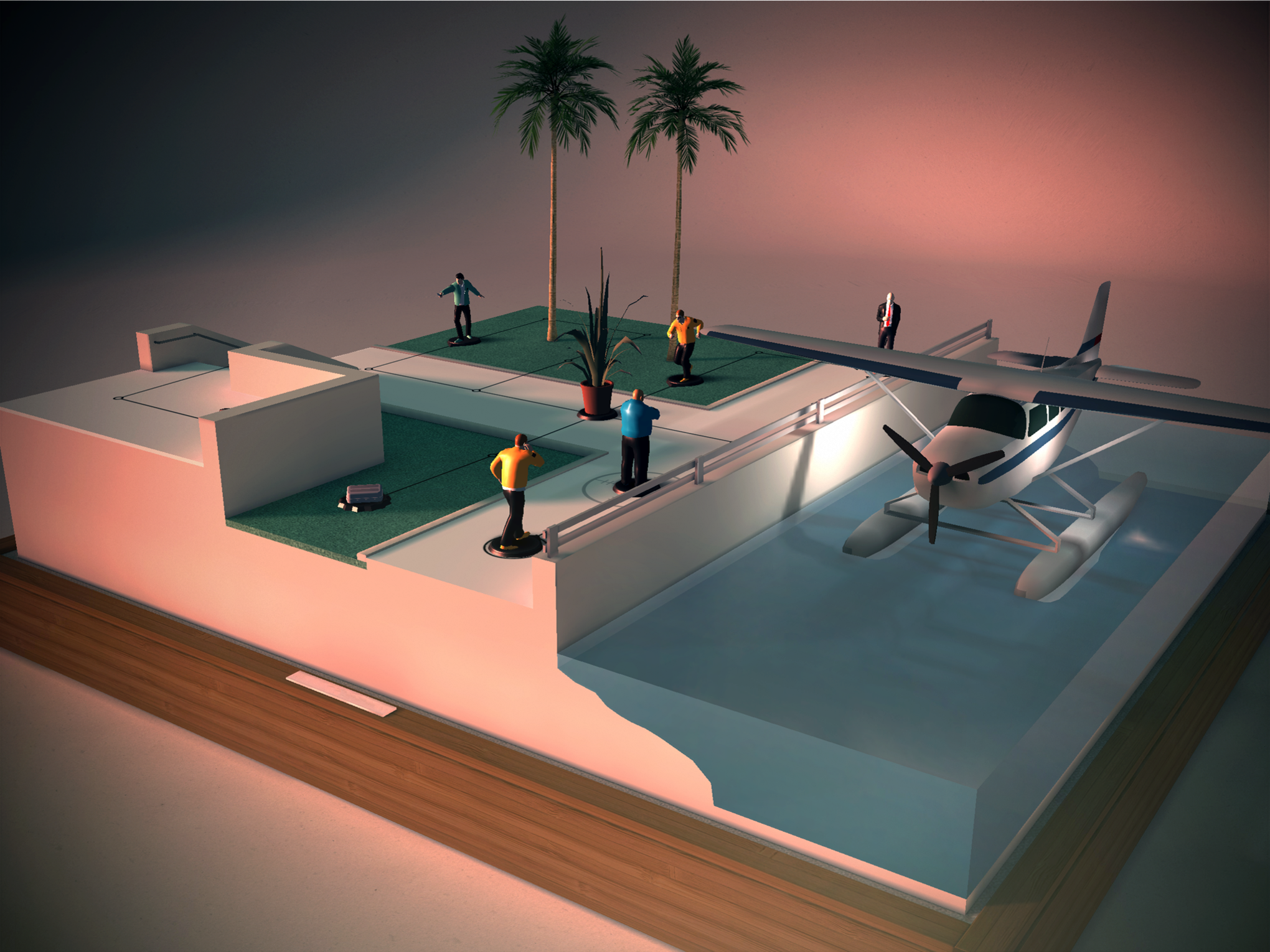 "There is no dialog or cutscenes but we wanted a story or at least some ambience," he said. "So we put down characters in poses throughout the game to tell a non-verbal story."

The game ends in a final set designed to mimic a level from Hitman: Blood Money.

"It's the fan-favorite level, Curtains Down," Lutz said. "We rebuilt it within Hitman Go."

Players can try to play out that final segment to end Go the same way Blood Money ends, or they can find other ways to complete the level, he said.

While Lutz said the team isn't working on post-release content for the game after its release, he did say that the modularity of the game is really, really strong.

"The basic framework makes it very easy to add more mechanics or new locations," he said. "It's something we're thinking about."