Cards Against Humanity and the art of hyper-local crowdsourcing

Share All sharing options for: Cards Against Humanity and the art of hyper-local crowdsourcing

Seven co-creators of Cards Against Humanity spent much of their PAX East 2014 panel soliciting suggestions that would, presumably, make it into future expansions for "the party game for horrible people." It's unlikely, however, that the audience expected to see their ideas realized quite so soon.

Here's a brief primer for those unfamiliar with the game. Cards Against Humanity can be described as an adult-oriented version of the card game Apples to Apples. In the standard version of the game, one player selects a black card, which contains a prompt of some kind — a question to be answered or a statement with blanks to be filled in. Each of the other players submits a white card (or multiple ones, if there's more than one blank) to respond to the prompt, and the first person selects what they judge to be the best answer.

The co-creators used the panel — which took place in a room packed with hundreds of Cards Against Humanity fans — as a giant brainstorming session. The panelists explained that they can spend hours coming up with cards and refining them, and with an original game and four main expansions under their belt, they've developed pretty high standards for new entries into the game.

They quickly dismissed plenty of ideas, and often for reasons that might not have been immediately apparent to the audience. Sometimes the suggestions simply weren't funny, or they were too crass or too tasteless (in other words, crass or tasteless without being funny). Sometimes, the cards were too similar to existing cards. Some white cards wouldn't work with enough of the black cards; some black cards were too limiting. Some white cards worked as jokes on their own, but wouldn't fit as responses to black cards — "that's a tweet," co-creator Max Temkin (pictured above at left) explained.

But in many cases, the panelists found a nugget of something compelling about a particular card, then spitballed alternate ways of wording it. Comedians know that the presence or lack of a single word, or a shift in the order of a sentence, can make all the difference in how hard a joke hits.

One attendee suggested some version of the phrase "the floor is actually made of lava" as a white card. The Cards Against Humanity makers immediately tweaked it to "a floor that is literally made of lava." Later on, when the panelists were winnowing down the list of suggested cards, co-creator David Pinsof (fourth from left above) said, "I could lose the 'literally' on 'the floor made of lava.'" But the others downvoted that thought, and an audience vote agreed, so 'literally' stayed.

"a floor that is literally made of lava"

The panelists kept teasing a special surprise for the end of the show, and they didn't disappoint. Temkin began a video call with Shari Spiro, president of AdMagic, the company that prints Cards Against Humanity. She brought her phone over to a press to show the attendees freshly cut sheets of the cards they had created together with the Cards Against Humanity developers less than an hour beforehand — AdMagic partnered with a Boston-area printing house to make it happen.

Temkin followed up with the kicker. The cards being printed at the time would be packed up and shipped to the Boston Convention and Exhibition Center for Saturday, April 11. He told everyone to find the pin taped under their seat — a pin good for a pack of brand-new, PAX-East-2014-panel-exclusive Cards Against Humanity cards that they had a hand in making. You can see three of them working together below.

Correction: The woman Temkin called is Shari Spiro, president of printing company AdMagic. The publisher is based in Netcong, N.J., and is a partner of the Boston-area printer that handled the PAX East 2014 panel pack. We've edited the story to reflect this. 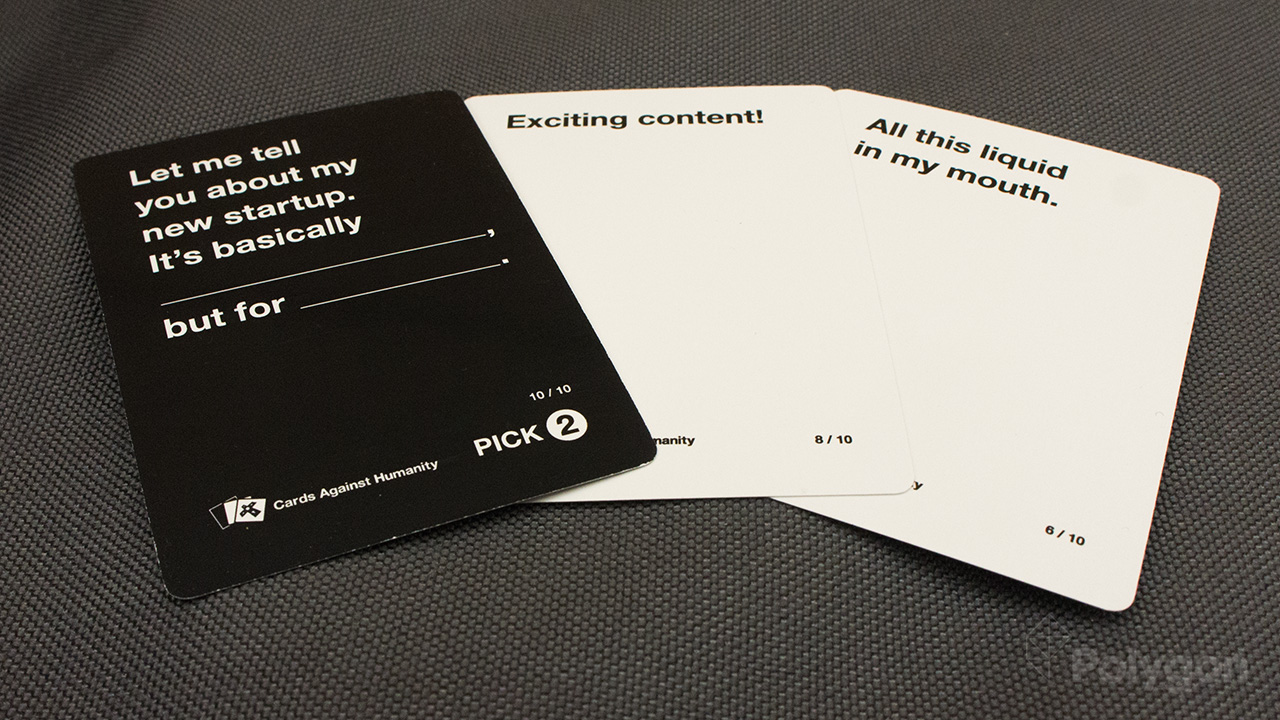