Watch Below from Capy Games in dark, atmospheric, dungeon-crawling action

Share All sharing options for: Watch Below from Capy Games in dark, atmospheric, dungeon-crawling action

Capy Games' Below, the stylish, atmospheric dungeon crawler coming to Xbox One and Windows PC through Steam, puts players in control of a tiny warrior exploring a sprawling land rife with mystery and danger.

And then the game sets the player free to explore its plains, caverns and the decaying remnants of the land's previous explorers, with no clear direction, no explanation about why the wanderer is there or what he or she might find in its depths.

Below is a quiet game that communicates much of its narrative and the finer details of its gameplay, like sword-based combat, through visual cues, not prompts and help text. Below doesn't lead you by the hand with tutorials, lengthy dialogue or coddling waypoints.

It is, instead, a brutal but fair game, its creators say, where you play as a capable wee warrior in world out to get you.

At PAX East 2014, Capy Games brought the first publicly playable version of Below to the booth it shares with Double Fine Productions, giving curious adventurers a taste of what the game will ultimately be.

"We wanted to make a game that was brutal," Capy Games creative director Kris Piotrowski told Polygon at PAX East. "Initially we started off the player with just one hit point ... That was our starting point: a game where you are a very, very capable character but you're one hit away from death. What we ended up with was that you have one hit point, but there's a moment of grace — if you do make a mistake ... you do have a chance to recover." 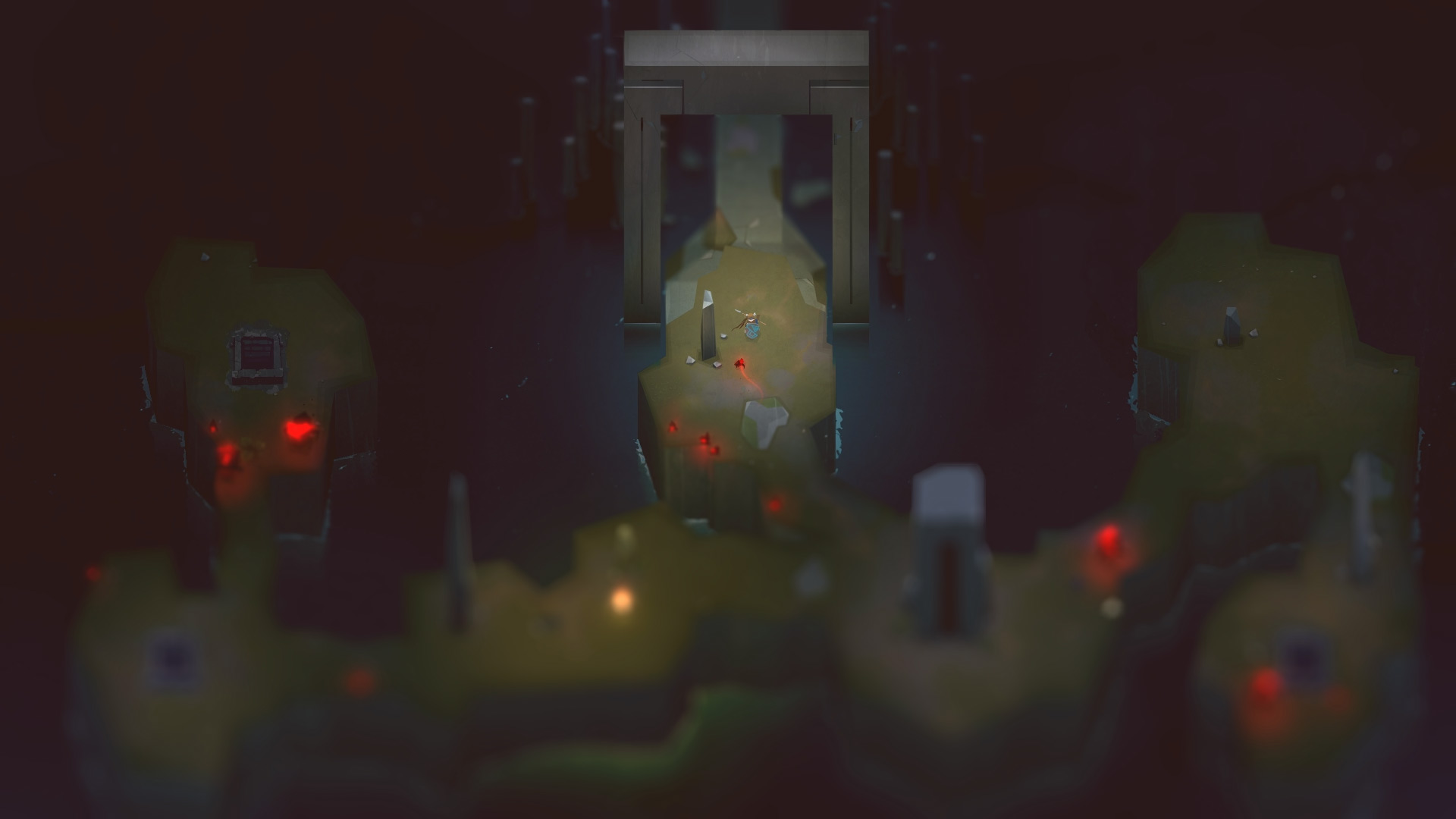 Players will face deadly creatures and instant-kill traps in Below: spike traps, poison darts and giant blades that can decapitate the wanderer. It's likely that a player's first encounter with any of those traps will be fatal, maybe a bit puzzling, but that they'll quickly adapt to the game's dangers.

"[The Legend of Zelda is] a very big influence for us," Piotrowski said. "Part of the reason the way the game world is built is that there was a time where AAA games held your hand too much. I think video games sort of went in the usability direction a little too far, and a lot of games now are responding to that. Games like Dark Souls or Spelunky, they allow the player to fail and to build on their skill and knowledge of the game. And the original Zelda was a game that gave you a sword and said, 'Go out there.'

"From the beginning, we didn't want to make a game that felt like a hack-and-slash. We really wanted to make a game that you kind of had to tippy-toe your way through because missing a detail could mean you get lost in the world or stepping in the wrong place can mean instant death."

In addition to sword and shield, the fundamentals that every wanderer has in Below, players will also be able to equip a back-up two-handed weapon: a bow and arrow, a hammer, a spear. Players can only equip one of those two-handed weapons at a time, which leads to strategic choices as you play.

Combat, Piotrowski said, is technical and skill-based. Drawing inspiration from combat controls in games like The Legend of Zelda: Wind Waker and Dark Souls, players will have an array of offensive and defensive moves at their disposal, and they'll have to be deliberate and considerate in battle.

"It's very, very dangerous and foolish to run into the game and start swinging your sword," Piotrowski said.

That careful consideration also applies to players' exploration of Below's world. It's peppered with cues designed to point players toward new mysteries and potential clues that shed light on the game's narrative. Those cues also direct players to interesting dioramas, scenes that color the game's story.

"If you're wandering around aimlessly you're going to be lost in the depths," Piotrowski said, "but if you're tuning into little breadcrumbs into the environment, if you're really paying attention and start looking for things intentionally, you're going to find it. Over time you're able to explore the game very intentionally.

"We have a clear narrative that we're telling, but we want to make sure this world and this experience is open to interpretation. And the way you do that is to tell people less."

Capy expects (and hopes) that players, and the community at large, will stitch together Below's narrative based on the secrets they collectively uncover as they play.

"There are so many examples of really complex, really secret-filled games where players come together as a community and just figure it all out," Piotrowski said. "No matter how crazy or convoluted your layers upon layers of madness is, the community is going to figure it out. And that's a treat. That's a joy. That's something that we are really striving for in Below.

"Fez is a brilliant example of that working well. The game has a core mechanic that works really well. And then once you're familiar with that there's a whole other layer you have to figure out, and you're going to be drawn to the community that's working it out together."

Below's other mysterious component is planned multiplayer integration. Capy teased it at last year's E3, and is still being coy about how players will wander through the game in groups.

"It's a little bit too early to really talk about it in detail, but we're very interested in using the zoomed-out view to create a unique experience," Piotrowski said. "If you're playing with multiple players in one screen, in one dungeon, they're all there together and that feels really good.

"There are some other bigger things that if I talked about them now, I'd risked Molyneux-ing out on you guys a little bit. I love Peter Molyneux ... I don't want that to sound like an insult, but I don't want to talk about crazy multiplayer ideas until they're a bit more finalized.

"But like with everything, we're trying to do the Below version of multiplayer and we have ideas we want to explore, but we're still exploring them."