Share All sharing options for: Star Citizen's Arena Commander is the first tantalizing taste of a great space sim

It started not with one crash, but two. But those dual crashes — one of a spaceship into an asteroid and the other of a Windows PC to a desktop — did little to dampen the enthusiasm of the hundreds crowded into Boston's Royale Club Thursday night.

They had come to witness the first really playable sign of a game they had so much faith in that they had backed its creation with cash, nearly $42 million in cash. And to this gathering of the space sim faithful, Cloud Imperium Games co-founder and CEO Chris Roberts was an icon.

So when, after several short delays, Roberts introduced the dogfighting module for the hotly anticipated Star Citizen to the crowd, they forgave his backing into an asteroid.

The crowd roared with delight when the minutely detailed space fighter exploded. They watched in rapt attention as the game went through it's animated introductory sequence again, and then a third time after a computer crash.

By the last time they were chanting for moments in the cut scene, and then cheered when it arrived.

For fans of a certain type of unforgiving space combat sim, games like Roberts' Wing Commander and Starlancer, Arena Commander was the first signs of a true predecessor for a genre many thought was dead.

The Arena Commander dogfight simulator will be the second major component of the game delivered to backers when it arrives in the next month or two.

The first piece of the game arrived last summer, when Cloud Imperium Games delivered a bit of software that allowed players to stroll through a digital hanger in the game's world.

This next step, Arena Commander, is actually a simulator built into the game's hangars that allow gamers to climb into their ships and sign into a virtual, virtual space to dogfight with other Star Citizen players.

The dogfighting module, we were told, will also include leaderboards.

The next day, I had a chance to try my hand at a dogfight in the module. The game delivered as punishing and fantastic an experience as I recalled from my days playing those early space dogfighting titles, but with some major additions.

Most obvious was the incredible level of detail to the game's visual fidelity. Everything on the ship was animated, everything seemed to serve a purpose.

The ship's heads-up display was slick and futuristic and the controls allowed players to lean into the intricacies of space flight by doing things like quickly flipping the ship's view to travel backwards at high speeds and blast at following enemy ships.

Most delightful was the game's ability to cause a pilot to black out if they pulled too many Gs in a series of tight turns. The screen would begin to grey out and eventually go completely black for a few seconds, if a player wasn't careful. 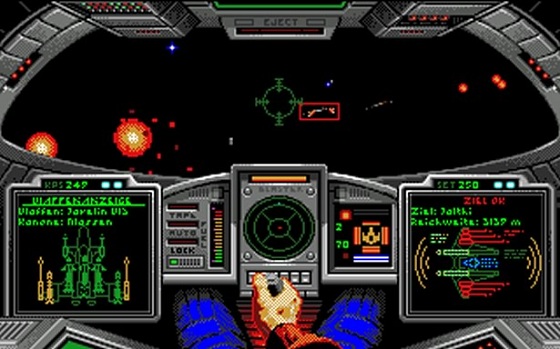 'Wing Commander' creator returns to the stars with a big gamble

The threat of a blackout caused me to completely change the way I flew and added a enjoyable level of tactics to my approach to a dogfight.

During the presentation Thursday night, Roberts also walked the gathered crowd through future plans for the long rollout of the game.

That includes plans for a Arena Commander 2 which would feature larger ships, the ability to fly and fight ships with larger crews, cooperative AI pilots and in-match communications.

Arena Commander 3, he said, would include more environments and the ability to enter a first-person shooter mode while trying to board and capture a ship.

Down the line, after the Arena Commander is fully realized, Roberts said the next steps will include the further development of the game's first-person shooter modes and the development and integration of the game universe's planetscape.