What is Bruce Lee doing in a UFC video game?

Share All sharing options for: What is Bruce Lee doing in a UFC video game?

Bruce Lee died in 1973. Twenty years later, the Ultimate Fighting Championship was founded. And 21 years after that, both are appearing in a video game together, EA Sports UFC.

The team-up is not without some controversy.

Bruce Lee's brand of fighting, distinct though it is, isn't what you see in the UFC. Hardcore MMA fans may dispute his background in jiu-jitsu, a core fighting style in modern MMA. Hardcore Bruce Lee fans might point out modern MMA isn't the kind of street fighting for which Lee was known as a competitor.

"They go, 'He'd poke you in the eyes, kick you in the knee and then do something to take you out,'" mused Brian Hayes, the creative director for EA Sports UFC. "We know there are going to be people like that on both ends."

Hayes brought all this up when his studio was in early discussions with Shannon Lee, the daughter of the martial arts icon who manages the use of his likeness. He just wanted to be sure she was ready for some fans to be ungrateful for her father's appearance.

Where UFC purists might gripe that the inclusion of a fantasy character takes away a roster spot from an active fighter, that assumes the active fighter they want to see would give his permission, or get it from the UFC to appear in their game. For the record, yes, the UFC signed off on Lee's inclusion and evidently has no concern about being overshadowed. "As soon as we were approached, I called Dana," White, the UFC's voluble president, whom Shannon Lee said is a friend. "I asked, 'Are you on board? Are you OK, are you excited?' He said, 'Are you kidding me? I think it's great.'"

Even so, including Lee carries an extra layer of management, for both his daughter and for EA Sports, that run-of-the-mill fighters don't require.

It's not just in Shannon Lee's approvals of her father's appearance, ring behavior and other minute details. Bruce Lee presents a ratings quandary, especially as he is listed to appear in four weight classes. (Lee is unlockable by beating the game's career mode, which could last between 35 and 40 fights, or by preordering the game.) The point of having a talent like Bruce Lee in this video game is to feel like you're performing as a truly one-of-a-kind fighter. But an overpowered Lee would be ubiquitous in online play, and make a moot point of fighting with anyone other than him in one-off matches.

"If I was fighting Bruce Lee I would definitely try to take him to the ground."

"From a ratings standpoint he will be a more adept striker," Hayes said. "His raw physical traits, speed and strength, will be very high. When you talk to people who worked with Bruce Lee, or see accounts of what it was like to train with a phenomenal athlete, you hear about his tremendous strength and endurance. He's rated highly in those categories."

Though Lee did train in judo with Gene Lebell later in his career, it is in the clinch and ground game where Lee will be weaker and thus more vulnerable. "If I was fighting Bruce Lee I would definitely try to take him to the ground," Hayes said.

There's the other wrinkle, for Shannon Lee, to putting her father in a mixed martial arts simulation: People are inevitably going to put up YouTube videos of Bruce Lee getting his ass kicked. "You know, I'm fine with that," she laughed. "Because A, this isn't real life and B, if people post a video of my father getting his ass kicked, it's because the player sucked, not Bruce Lee sucked."

Still, this is a game that features blood and bruising, and brags about the detail in which players' skin deforms when they take a punch or a kick. Bruce Lee is going to be subjected to that, too. "Oh yeah," Hayes said. "He was human, although at the time he may have seen superhuman. Nobody's gonna bring out that bear claw that Mr. Han had in Enter the Dragon, but when he gets in the octagon, he will bleed like the rest of us, and look like a badass doing it.

"Shannon knows her father took fighting very seriously, and knew what the consequences of a fight were going in," Hayes said. "She never said, 'my father has to be rated 100, he can never be knocked out,' or weird things like that." 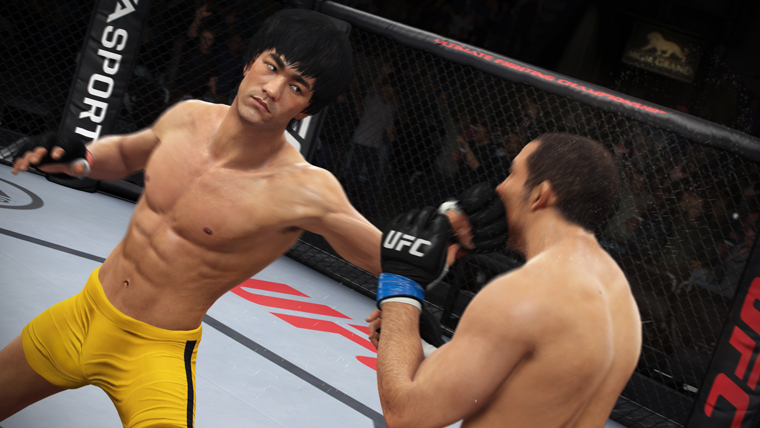 Lee assumed control of her father's likeness back in 2012, and while partnering with big brands like UFC and EA Sports — and a licensing agreement surely befitting those names and Bruce Lee's — has an understandable attraction, there was another reason Shannon Lee agreed to the deal.

She has been approached in the past about doing dedicated Bruce Lee video games, she said. "There was a company that really wanted to do something for Kinect," she said, not specifying who it was, "which didn't seem like a bad opportunity.

"But when we would do our due diligence [on these offers] maybe all the pieces don't quite line up, or they don't have what it takes to deliver the most top-notch product," she said. "I'd really rather not do something than do something that has the potential for doing poorly."

So being a guest star in an MMA title gives Bruce Lee fans the chance to see him in a big-budget video game, while sparing his daughter from the more complicated arrangement of approving his likeness in a dedicated title. "It's a way to dip our toe into console gaming," she said. "Certainly we have the hope to do a major console game some day, but that's a major undertaking, and we would really want it done right."

Despite the skepticism from hardcore partisans of both the UFC and Bruce Lee's legacy, Hayes thinks his team has captured that.

"In the middle are people who say, 'When I backfist somebody in the face, or when I do a jumping sidekick, it's gonna be the coolest fucking shit that I've ever seen,'" Hayes said. "There are gonna be people who say, 'Bruce Lee really had no jiu-jitsu,' but most people will say his shorts look awesome, he looks awesome, all the things that 99 to 99.8 percent of people will think is just the coolest."