It was hard to imagine FarmVille 2 on mobile.

The web version, which launched in 2012, was designed with the mouse cursor in mind. It played like a simulation and real-time strategy game. There may not have been enemies or beasts to slay, but there were things to move on a game board, crops to plant and items to craft. The cute farming exterior was, in some ways, deceptive, because if players wanted to get strategic and competitive with their farms, they could.

In bringing FarmVille 2 to mobile, developer Zynga had to redesign the game to be "mobile first." Porting the web version to mobile devices wouldn't have worked for a number of reasons. The web version relies on mouse input; mobile devices use swipe inputs. Web players are likely to spend more time with the game during play sessions, and are also likely to keep the game running in the background; mobile players stick around for shorter sessions, opening and closing apps throughout the day.

So it was hard to imagine how FarmVille 2 would look and play on mobile if he had to abandon many of its web features, like the ability to click and its web-friendly pacing. But when we recently got to play the game, it couldn't have been more obvious.

Many of the core changes Zynga made to FarmVille 2: Country Escape, which is out today for iOS and Android devices, are both intuitive and thoughtful. The game embraces swipe and tap gestures. On the web version, players have to click on their wells to get water and then click on individual crops to water them; Country Escape lets players tap on crops and swipe water droplets onto the plot of land. Feeding animals and milling flour are also a swipe away. Tapping on an animal or piece of machinery will show players what items can interact with the animals and machines, and players simply swipe to create those interactions.

The process of crafting items has also been streamlined. Where the web version allows players to scroll through pages and pages of items that tell them how many ingredients they need to craft a particular food, the mobile game automatically pairs up ingredients for the player, and initiating crafting is as simple as a swipe. 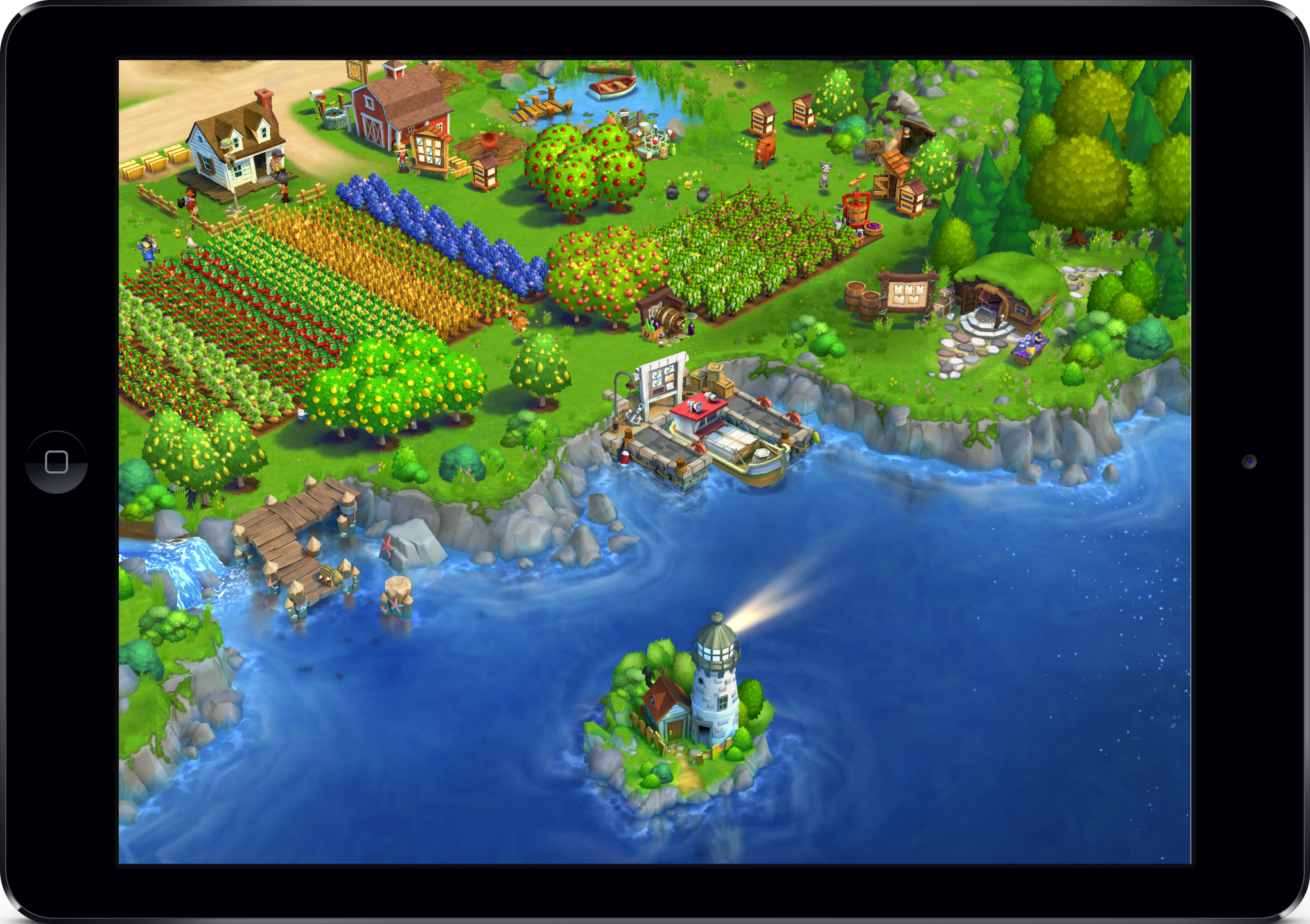 Country Escape also introduces a major change to the game's pacing. Everything happens much faster, from the speed at which plants grow to how long it takes cows to produce milk. Core crops like apple trees take only 10 seconds to harvest. Wheat takes 30 seconds. The timers on production are quick, which allow players to do more in a shorter space of time. This feature was designed around how players use mobile devices and caters to shorter play sessions.

Players will also have the option of connecting their mobile farm to their web farm, which will allow them to trade items back and forth.

Zynga's vice president of games, Jonathan Knight told Polygon that the web version of the game already has a loyal following, so this is a way of rewarding players who have invested in FarmVille 2. The web and mobile farms stand as separate entities, and the value of certain items in the web version of the game differ to that of the mobile version. Players who connect their games will have the option of crafting items and collecting ingredients and transferring them between games.

"...you can send valuable items from one farm to another and vice versa."

"It's really cool because we know what's important to players when they play on the web," Knight said. "So we know water is scarce in the web version of the game, and sugar is a resource you can only get from friends. Similarly, on the mobile version you learn that butter takes a long time to craft and is very valuable. So we've designed a kind of connected reward system so you can send valuable items from one farm to another and vice versa."

The game is playable offline and across multiple platforms. When players connect their devices online, their game will sync to the cloud and their progress will be saved. Knight told Polygon that players will be able to play completely solo if they wish, but if they prefer a more social experience, the mobile game has a slightly different take on multiplayer.

In the web version of the game, players often had to call on the help of their friends to help them build items. This usually resulted in players casting a fairly wide net to FarmVille 2 players on their Facebook friends list, which didn't always translate into help. In Country Escape, players can create co-ops, which are similar to guilds, and band together with other players to work toward common goals. Instead of casting a wide net, players can build or join a co-op where they know they can get help from other players and, in turn, they can lend a hand. Within co-ops, players will be able to chat with each other, request farm hands, or compete with other co-ops to see who can be worth the most, or who has the most prize animals.

"I think what we find from our players is they like the fact that the game is so accessible initially ... but as you get into it, players do want some depth and challenge," Knight said. "Some are more competitive than others. We're letting them join up to compete, and we're giving them more strategic elements so they can maximize their opportunities to earn coins.

"So I think it's casual and fun initially, but there's opportunity for a lot of depth."