Palmer Luckey is the founder of Oculus, the company that was recently acquired by Facebook for $2 billion in cash and stock. It’s a big story, and the Oculus Rift virtual reality hardware is likely the best chance that open, high-quality virtual reality has at a mainstream market.

In a recent interview, which has since blown up online, Luckey stated that standard displays and televisions will likely give way to a virtual reality solution.

Let’s take a look at the actual quotes, and I've embedded the video so you can watch the conversation itself.

"Why in the world would you buy a 60-inch TV that, even if it were dirt cheap for that, it's still going to cost a lot to ship it and make it from raw materials," Luckey told Maximum PC. "A VR headset is going to be much better and much cheaper and you can take it anywhere."

The model of the big screen HDTV that we’re used to now, according to Lucky, won’t be feasible in the future. These claims were met with a wide amount of scorn, a few personal attacks and many claims that Luckey has become completely out of touch with reality.

This sort of forward-looking, sweeping statement isn’t rare in the business world however, and I think it’s worth taking the time to understand why they’re made.

If you sell spoons, you don't talk up forks

When you’re a hammer, all you see are nails. This is why we have situations like the "King Games Guru" Tommy Palm claiming that all games will be free-to-play, or at least offer microtransactions.

"The micro-transaction is so strong and it’s definitely a much better model. I think all companies have to transition over to that," he told IGN. "If you talk to many hardcore gamers, they’re not happy about it right now, but if you asked them about the long term, 'do you want to continue playing your favorite game for years to come?’ And the answer will be yes."

It’s an interesting argument, but of course it’s from a biased sourced. King Games is an obscenely profitable company that has built its success on one hit, with one very specific way to make money. They’re struggling with the perception that it won’t be repeatable, or that the model is exploitative. It’s Palm's job to show that their model is the one true way, and to present that front to the press, gamers and other companies working in the same space.

These stories aren’t just for players and the press, they’re a way to posture yourself in the greater marketplace. When you have someone speaking from a position of enjoying billions of dollars in revenue, such as King Games, or a $2 billion dollar valuation, such as Oculus, other people in similar businesses are going to listen. The trick is to present your solution as the solution to a number of problems, and spread that message as far as possible.

People think these statements are stupid because they’re comparing televisions as they exist now to the virtual reality headsets as they exist now. Of course saying one will replace the other is batty based on today's technology; it’s like looking at a giant 32 inch CRT from 15 years ago and laughing at someone who says one day we’re going to hang our television on the wall like a picture.

I'm not arguing that people are going to strap on bulky VR headsets to experience motion sickness while watching True Detective Season 24. The better question to ask is what head-mounted displays and televisions will look like in 20 years. My money is on both technologies being nearly unrecognizable.

The amount of changes and improvements that have come to the Oculus platform in two years is amazing; there have been more breakthroughs in the hardware and software of virtual reality in the past 24 months than there has been in the past 10 years.

The ability of the technology to get smaller, cheaper, more comfortable and less obtrusive is unlimited where your timeline stretches across multiple decades, especially now that the best minds in virtual reality and wearable displays are collected in one company with the full backing and support of Facebook. 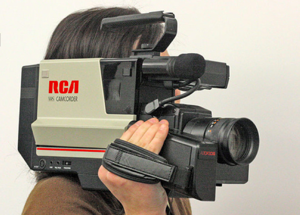 The Rift won't replace computer monitors or televisions in the near future, but it's not crazy to think that some form of light head-mounted display or glasses with motion tracking or 3D implementation will replace the traditional screen. That idea that some form of wearable display with extra levels of immersion, that allows for real-world social interaction while worn just like today's displays, isn't science fiction any more. We're already on a timeline moving towards that sort of equipment becoming inexpensive and common.

This sort of disruption and change in technology happens all the time, we just rarely pay attention. Tell someone who has a bulky camcorder resting on their shoulder in 1985 that one day they will just use their portable phone to shoot, edit and watch video and they'd think you were smoking something. Yet here we are.

Not even Orwell predicted that citizens would clamor for the opportunity to spend $1,500 to strap surveillance cameras on themselves. There is a limit to what we can see what we look into the future, and we’re usually stuck thinking of paradigms that reflect our current reality. The idea of a single, central display in our home that displays entertainment is a dying idea already as we move our viewing habits to tablets, phones and laptops. The move away from large plasma screens has already begun.

The challenge is to turn VR into something that is easy to take on and off, that allows you to interact with others in the same room and allows the sort of communal viewing that takes place when you gather with friends or family to watch a show or movie. Virtual reality may replace computer monitors at some point in our life, but it will first have to provide an easy and frictionless way to share the display with others.

These aren't unsolvable problems, but we don't have the answers yet or even a hint at what the breakthrough would look like, so we reject the possibility. While I don't think Samsung has to worry about Oculus stealing mindshare from televisions in the near future, it's very possible that movie theaters are at risk.

Why drive to see a movie with people who won't shut when you can put on your comfortable headset with your family to share your own private theater in your living room? This is the theoretical power of virtual reality; wouldn't it be more fun to watch a movie projected on a screen deep in a virtual jungle instead of a screen hanging on your living room wall? 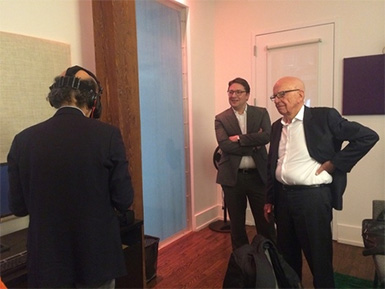 The entire entertainment industry is watching Oculus due to that $2 billion valuation. If Luckey can convince even one media company to make the first steps towards releasing narrative video for the Rift the comment will be worth it, and then more may follow. These forward-looking statements by powerful people in tech are designed to make the future just as much as predict it. There are already some interesting productions being shot with an eye towards virtual reality. Rupert Murdoch feels like checking out the technology is worth his time.

The idea that traditional displays won’t exist in 20 years isn’t crazy, it’s common sense. Oculus may not own that future, and it may look vastly different than the ideas I've shared here, but Luckey isn't crazy, and he's certainly not out of touch.