Disney Infinity 2.0, the "latest chapter" of Disney's real-world toy/video game platform, may launch this August, according to a news brief on the official Disney Fan Club D23.

"Disney Infinity 2.0 is coming in August 2014, and a teaser trailer can be viewed at Marvel.com," according to the post recently discovered by Infinity Inquirer. "The teaser promises such Marvel-ous additions to the game as familiar Marvel characters, objects, and vehicles-the possibilities are infinite."

The D23 news brief mentioning the Disney Infinity 2.0 launch window has been pulled from the website since the recent discovery, but still appears in Google's cache (viewed below). According to an invitation sent to Polygon this week, Disney and Marvel Entertainment will unveil a collaboration on "the latest chapter of Disney Infinity" on April 30. Marvel released the "Get Ready to Assemble" teaser trailer for the project last week that mentioned the phrase "Disney Infinity 2.0."

For more on the original title, which launched last August, be sure to read and watch Polygon's Disney Infinity review.

Thank you for the tip, Jason Grier.

Update: D23 posted an update this afternoon saying the original story was wrong:

"In D23′s News Briefs published April 15, 2014, we erroneously reported about the launch of the next chapter of Disney Infinity. This information was incorrect. More news about Disney Infinity will be shared on April 30, and we hope you will check back for that update. For the latest from Disney Infinity click here, and Get Ready to Assemble." 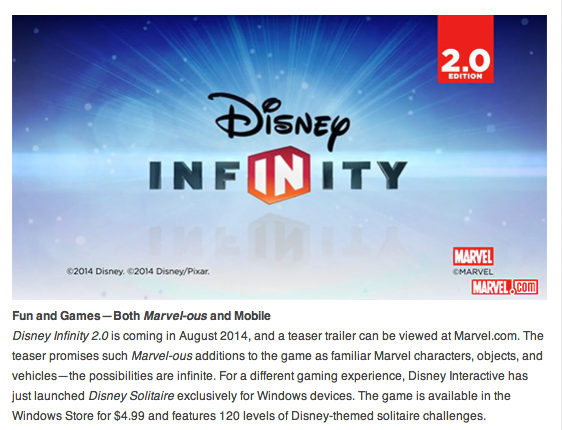