Share All sharing options for: The unusual game that was born out of the debilitating failure of Retro/Grade

Eighty hours a week for four years. $70,000 out of pocket. Matt Gilgenbach, like many indie developers, poured his heart, soul, life and finances into one single, all-encompassing passion project: Retro/Grade.

And then it failed, well at least financially failed.

"It was a financial disaster," he said. "We got positive critical response, but it didn't resonate in terms of sales. Or maybe we failed to market it.

"I'm still not sure what the problem was with Retro/Grade."

The two man team that made up 24 Caret Games went their separate ways and old memories came back to haunt Gilgenbach.

"I struggled with depression and obsessive-compulsive disorder for a large part of my life," he said. "That sent me down into a depressing episode.

"All of these memories were flooding back about how bad things used to be before I got things under control."

Gilgenbach knew he had to do something to reclaim control and decided to once more make a game.

"I knew there was one last Hail Mary chance for me to succeed as a game developer," he said. "And if I only have one last chance, I wanted to make the game I always dreamed of. I wanted to make a game that was important and meant something. Since I already struggled with depression I thought it would be a great chance to turn those negative feelings into a game, hopefully an emotional one." 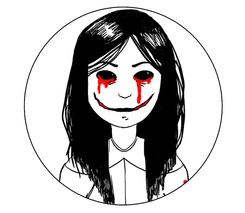 Neverending Nightmares was successfully funded at the end of September, pulling in about $106,000, or a touch more than the $99,000 for which Gilgenbach was aiming. The game is set for a late September, early October release on Mac, Linux, Windows and Ouya, but Gilgenbach was at PAX East last week showing off a demo of his creation.

In the game, players take on the role of a black and white, penciled character that looks a lot like Gilgenbach. The game is played from the side, viewing the flat world as a sort of animated cartoon. Players use a controller or keyboard to move the pajamaed character across the screen, pushing up to enter doors or go down branching, darkened hallways.

It is the opposite of an action game. The main character, like Gilgenbach, has severe asthma and can't run very fast or for very long, so when he needs to escape he has to find a hiding place.

But it's not the mechanics that drive this game nor is it even the unusual hand-drawn look of the title. What makes Neverending Nightmares so compelling is its ability to drop people into the sometimes surreal, often disquieting reality of someone with severe depression and OCD.

Characterized by an anxiety powered by recurrent, unwanted thoughts and behavior, OCD's intrusive thoughts have a powerful impact on both the game and Gilgenbach's life.

Gilgenbach said at the height of his struggle with OCD he would often picture slowly pulling the veins from his arms, a scene found in the game.

"A lot of the game is autobiographical in terms of the feeling it is trying to create, but not always the actual nightmare," he said. "I do have intrusive thoughts. Your mind comes up with these terrible things you don't want to think about, but they keep popping into your mind. I've had a lot of feelings about self-deprecation and self-injurious thoughts. I included those things in the game. 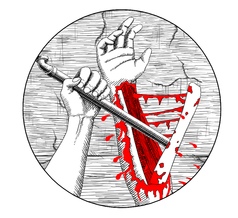 "For instance the images of a guy pulling the vein out of his arm, which I don't think is bio-mechanically possible, is for some reason the image my mind came up with to torment me. It has haunted me for years. But I don't feel responsible for that thought, it's the mental illness."

What I saw of the game offered fascinating insight into another way to view the world, a world where I was to blame for death, my own injuries and inability to escape harm. The gameplay was dark, sombrous, filled with odd, shifting imagery, like a girl crying blood, or massive, muscle-bound babies in diapers. Every death ended with my awaking startled in a bed or empty room. It was a disjointed look at a compelling experience.

Gilgenbach said he was going for a very bleak atmosphere with the team who helped create the game. Initially, he was worried that exploring his mental issues and detailing them to developers would drop him back into what he called those "very dark times."

"I've actually found it to be therapeutic to open my mind and show these things to people," he said. "But they do have to be just right. They're very detailed, very complicated. I'm always going to the artist and saying, ‘No, that's not right, you're not doing it right.'

"It must be hard for them because I can't show them. I can't draw, but I really want to get it out there because I feel it will be therapeutic for others as well."

While the game is designed to be a compelling experience first, Gilgenbach hopes it will also help people come to have a better understanding of the issues he and others like him deal with.

Part of that is designing the game to have branching narratives and no real ending.

"The idea is that it contributes to the nightmarish dreamscape," he said. "Every time you reach the ending they're completely different. There is no real reality, everything is still wrapped in a nightmare." 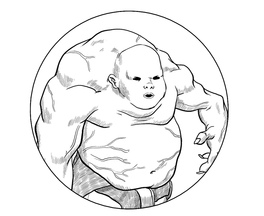 He hopes that will compel people to dig deeper into the experience and look at the commonalities of what is happening and why.

"And hopefully they'll think about what it means to suffer from mental illness and that feeling will stand out more than the story," he said.

Gilgenbach points out that the thing that drew him to horror games is that they're never really about having fun.

"You're about do do things narratively and with gameplay mechanics that you couldn't otherwise do," he said. "Horror games are all about vulnerability. It's not necessarily about creating fun mechanics, it's about creating mechanics with the emotional impact you want them to have."

While Gilgenbach wants the game to educate players, he didn't want it to be overtly educational.

"I didn't want to say this is about mental health or call it Matt's OCD Quest," he said. "I just would like the game to leave a message of hope for people. I still suffer from OCD, there is no cure, but I've gained the tools necessary to make my life enjoyable despite the mental illness.

"At a certain point in my life, I thought, ‘I always will have this, I'm always going to be miserable. I don't want to be alive anymore.' So I want there to be a sense of, ‘You can get help and get control over your mental illness because I was able to.'"