Share All sharing options for: Three indies discuss the future of free-to-play games

The phrase itself conjures up emotions.

The free-to-play model as it's been used in the last few years is divisive. Some see it as a way to lower the barrier to entry, to invite players into games without an upfront financial burden. Others see it used as a crass business model designed to get players to pay to win.

It's not only players who wrestle with the revenue model. Developers we've spoken to are aware of its less than stellar reputation, even as they see its potential benefits. And some of them, particularly independent developers, are looking for ways to invoke the free-to-play model without the baggage associated with it.

The free-to-play model is evolving, and the developers at Carbon Games, FrogDice and RobotLovesKitty showed us how.

Only a few years ago, James Green would have rolled his eyes at free-to-play games.

What makes Green's current position interesting is that he's the game director for AirMech Arena, Carbon Games' real-time strategy game. It was released last year as AirMech in open beta for Windows PC. Earlier this month, Ubisoft announced that it was bringing the game to Xbox 360.

On both platforms, it's free-to-play.

"Three years ago, free-to-play was Zynga," Green told Polygon at PAX East 2014. "When you thought of free-to-play, League [of Legends] was starting to make some headway, but it was a very unaccepted model. I thought of it as being that."

Green said that he didn't like the model because he thought it was often unfair to players. Even Steam Early Access seems a little odd to him, in part because of how things worked when he came of age.

"Back in my day," he said, mimicking an old man, "you got betas for free, and you helped test, and that was considered awesome."

It's not that he's against free. In fact, he knows it can work. He said that his first industry job was as an animator at Epic Games. He watched Epic fight with its then-publisher to release the Unreal Tournament bonus packs for free. That kind of free content is a service to fans, he said, but the free-to-play model as it evolved in the last few years took a different path. He didn't realize free-to-play could work until he made the connection with the way things used to be.

"I still remember getting my disc of Doom, putting it in the computer," he said. "I was like, 'Oh my God, what is this? I can send the developer $20 and get more?' That model is pretty much the same thing. It's just pretty much evaporated, gone away. It's trials, it's like a demo with the whole community where you don't lose anything, or it's the shareware model. Call it whatever you want."

Carbon Games even includes the option to buy the game for a one-time $20 payment, in the style of Doom.

AirMech Arena grew out of that realization. Carbon Games pitched the game to several publishers, but none saw their vision, Green said.

"All the other ones — I won't name names — but they don't get it," he said. "They just want to make a quick buck, whereas we see this as a 10-year project, at least.

"That's the argument that we made to everybody, but nobody really got it."

Then Ubisoft entered the picture. To Green, Ubisoft is the kind of company that's willing to foster a long-term investment, and that made sense for Carbon Games and AirMech Arena.

He sees the game almost as a service in the mold of League of Legends and World of Warcraft.

Green's point is not that he believes that the studio has cracked the free-to-play code. It's that he he believes there's value for players in delivering a game for free and giving them the option to pay for it later. In AirMech Arena, that takes the form of "skins and pets and silly things," designed specifically not to gate the players out.

"If you know that what you're selling is not exploitative, then if people are spending money, it means they're happy," he said. "It's really a very simple thing."

Whereas Carbon recently adopted the free-to-play model, developer FrogDice president and CEO Michael Hartman have been making free-to-play games for the better part of two decades.

The developer revealed its new game, Stash, with a trailer at PAX East. The fantasy-themed online multiplayer role-playing game is set in the world of Primordiax, where players will battle, explore and collect loot to stash in their base of operations. Stash will also be free-to-play.

Although players won't have to pay for the game when it's released, Hartman was quick to explain why that wasn't a bad thing.

The studio approaches the revenue model from a specific angle that it believes can benefit players.

"We have a philosophy for free-to-play, a motto," he said. "If you make your game fun enough that people play long enough, eventually they'll buy something. Not that we don't have metrics, but instead of being all metrics-driven and everyone's like, 'We've got to get them to pay here, do this or do that,' we're like, 'You know what? Let's just make the game really fun.'

"If they play, there's curve. The curve I like is time. Eventually [in] that time, they're going to buy something."

But why would players buy something in a game they can play endlessly for free? To Hartman, it's about the connection between the player and the game.

"It's because they love the game," he said. "They're going to want to buy something because they want to support the game."

FrogDice's free-to-play strategy is to keep those things that players pay for valuable, in part so players don't regret their purchases.

"Also, we try to make sure that the things you can buy have a lot of value, instead of those things you regret later," he said. "No disrespect to how a lot of other games are, but when you look back and you're like, 'Man, I spent $75 just to speed things up,' you ultimately regret those expenditures. You're like, 'I'm no different than I would have been patient.' So, I think they have a lot of regret. Whereas, if they look back and they say, 'OK, I've spent $300 on this game, but I've been playing it four years, I've got this house, I've got this cool thing, I've got this, I've got that,' there's no regret. And when you have no regret, you keep buying."

Legend of Dungeon developer RobotLovesKitty has spent the last month or so working on a new game called Upsilon Circuit, a single-server online role-playing game you can play only once. The development duo plans to make it free-to-play, and they're well aware of the baggage that comes along with the phrase. That's why they're planning on turning the model on its head.

"Our objective is to not to be evil," developer Alix Stolzer told Polygon at PAX East 2014. "We don't want to do the pay-to-win. I think the most fascinating thing about our approach is that the person playing the game can't buy anything. You're spending your money on someone else." 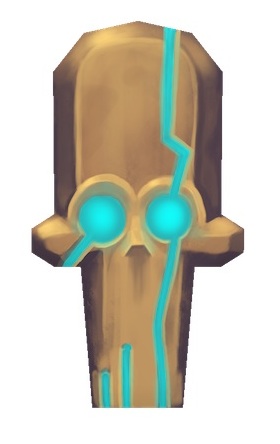 In Upsilon Circuit, only one player will control the game at a time, while several other players can watch a stream and affect the game. They can buy upgrades, level up the character they're not playing or even spawn enemies. If their free-to-play model works as intended, it'll let players pay for things they want to see in the game.

"We had a group of people we showed this to the other night," developer Calvin Goble told Polygon, "and the first thing that came up when we told them that was, this guy went, 'Oh, if Steve gets to play, I'm going to send in so many bad things on him!' It's that kind of mindset."

Upsilon Circuit's take on a free game isn't about benefiting the player controlling the character directly. It's about active viewers.

"I don't feel like we're being evil because we need money to make the game work, right?" he asked. "And people want to do these things, and obviously you need to spend some money to make those things happen. Nobody's going into this going, 'I'm going to play a free-to-play game.' It's, 'I'm going to go watch this game. I don't need to spend any money, but you know what? Screw that guy. Let's get a monster in there.'"

RobotLovesKitty wants to make the barrier to purchasing griefing high enough that it'll be cost prohibitive. While it might technically be possible to throw lots of money at Upsilon Circuit, they're designing it so that time spent spectating and performing tasks while doing so is more valuable and earns spectators the option to do more.

"I can't imagine someone wanting to put money in like that," Alix Stolzer said. " That would be a crazy person, and we can't make a game with all crazy people in mind."