Share All sharing options for: How Grey Goo hopes to revolutionize real-time strategy

It's all about the goo.

Grey Goo, the recently announced real-time-strategy game coming from Grey Box, has a lot going for it. The game looks like a smart return to a beloved PC genre conceptualized by Weta Workshop, the design studio behind the likes of District 9, Lord of the Rings and Avatar, and developed by Petroglyph Games, the team formed out of the husk of Westwood Studios and responsible for titles like Star Wars: Empire at War and End of Nations.

In a nutshell: This is a game imagined by Weta and empowered by Petroglyph.

Despite that impressive pedigree though, the most memorable thing about my time with the team responsible for Grey Goo was the grey goo.

The idea of grey goo has been around since the mid-80s when nanotech pioneer Eric Drexler first postulated the concept of exponential growth of nanomachines. That in turn gave way to the idea of self-replicating nanomachines, an ever growing mass of microscopic robots that could eventually consume all matter on Earth.

In the fiction of the game Grey Goo, this ever-growing, always consuming nano-blob is one of three playable factions in the game.

Josh Maida, executive producer at publisher Grey Box, said they went to Weta to get them to breathe life into their idea.

"We were going to do a sci-fi RTS and that puts us in the same dorm room as other sci-fi RTS," he said. "We didn't think Blizzard should have the monopoly on these games with StarCraft."

Maida said the team went to Weta early on for help with the concepts because they liked what the design house did with the movie District 9.

"They're really great to work with," he said.

Pop culture loves its grey goo. Since its first mention in a 1986 magazine article there have been at least five apocalyptic sci-fi books about the molecular nanotech.

The game, which is planned for a fall release on Windows PC likely through Steam, takes place 500 years in the future, he said. Humanity has discovered space travel, gone out into the galaxy and found nothing, and then retreated back to Earth. Generations after humanity's retreat a ship from a dying alien race known as The Beta discovers a planet called Ecosystem Nine. The Beta take refuge on the planet and start to rebuild their civilization, but something sets off a signal that draws both the humans and grey goo to the planet and sets off a three-way war.

The look of the factions and the planet were all colored by Weta's work, an exciting process, said Andrew Zoboki, lead game designer at Petroglyph.

"Weta was involved with everything," he said. "We'd send a map design to them and they would come back with concept for it.

"It was really intimidating to work with them. They jumped into the game with full passion and developed some really cool, interesting stuff."

The end result is a reimagining of the classic real-time strategy game driven by three incredibly different factions and a streamlining of the process of play. A chief design pillar of the game was to create a strategy title that reduced the micro-management found in most strategy games, giving players time to focus on what should matter most in one of these titles: The tactics and mastering the factions.

"Betas are a really industrial society," Zoboki said. "They want function out of everything and rely on machinery. Their creations are important for function, not aesthetics. They rely more on their units than on their infrastructure and believe that machines are meant to be driven."

The Betas, he added, are the middle ground faction, the group that is most balanced between the defensive turtles that are the humans and the offensive grey goo.

The first step in establishing a Beta colony is to drop the headquarters and attach a refinery to it. The game automatically manages the creation of gathering units and their hunt for resources, leaving the player to concentrate on more important things.

The Betas rely on a system of hubs, each of which have a set number of nodes that can have buildings attached to them. These attached buildings can either expand the functionality of a hub or modify it. Attaching technology structures to a factory, for instance, allows you to build more things from that factory. Building more than one factory increases your production speed. Attaching stealth tech structure means that the units coming out of that factory can be cloaked. 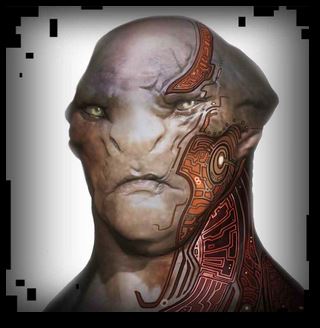 Betas also have the ability to create outpost headquarters for forward positions, for instance.

"You can micromanage if you want to," Zoboki said.

Because the game makes use of terrain, it's important to keep a closer eye on your units as they position for a fight. In one example, Zoboki showed how his units could spot enemies below from a raised cliff edge, but those lower units couldn't see him.

"Without vision you can't attack," he said.

The same is true for forests and brush.

"When you think about war and battle, you think about fighting from the treeline," he said. "We wanted brush and forest elements to work on the map in a way that made them tactically important."

That means players can set up ambushes by having units lay in wait in a copse of trees. 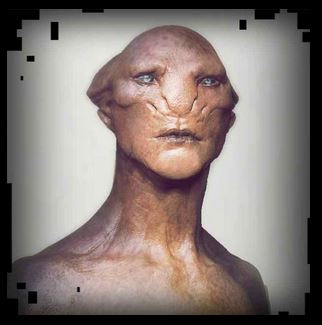 "You might see a unit running from an army to the woods, but the question is, ‘Do they have units in those woods?'" he said.

Betas can build three sizes of their hubs, each with a different number of nodes for attaching buildings: two nodes, four and six.

The beta units are mechanized and have the ability to mount to walls. So an artillery unit could mount to a wall and effectively become a turret, giving them an increased defense ability until they unmount.

Each of the game's factions also has a single epic class unit. The only one I was shown was for the Beta. The Hand of Ruk is a massive floating production facility that has six mounting slots for units to turn it into a factory and battleship.

"Creating it consumes a massive production facility," Zoboki said. "So you're making this trade-off of having a production facility or converting it into a floating fortress that can produce units. It has the benefits of a wall, so you can mount units and it comes with a massive battle canon.

"This is your game changer."

In this future, humanity has learned from their mistakes and become "extreme tree huggers."

"They like things that are beautiful as well as functional."

Where the Betas have the ability to create outposts and build factories around a map, the humans can only have a single fortress.

"They have a main headquarters and every building has to attach to that, expanding out," Zoboki said. "It's a little Tetris-like, you have to find the best fit for the buildings."

Humans are masters of teleportation, which comes in handy because over the course of a match you'll likely want to move those buildings around to make them better fit into one another.

"You can throw a ground turret near a base and then take that turret and teleport it," he said. "You can do that with any buildings and it's a very small cost to move.

"There's a lot of gameplay in how you arrange your base. It's a really fun element of gameplay."

Because the human faction was designed to be the turtle of the game, their base is designed to play a bit like a tower-defense game. While humans can pass through their own walls, no one else can, so humans can create channels that force enemies through maze-like passages loaded with turrets.

While the humans can't build outposts, they can extend their base a bit by laying down conduit lines. This allows a human player to drop down relatively remote turrets or power grids. However, if they conduit is attacked and broken, the structure loses power and stops functioning until the line is repaired.

"This means you have to start thinking about how to design a base with redundancies," Zoboki said. "It's a tactical element of the game."

One of the big strengths of the humans is that they can use teleport facilities to teleport units anywhere they can see, though teleporting is one way.

All of the human's units are drones, with one exception: The alpha.

Zoboki declined to explain what the alpha is other than to say it is the human's epic unit and the only time a person enters the battlefield.

While humans and betas both have an interesting take on strategy and warfare, neither are as game changing as the title's namesake: The grey goo.

Highly adaptable, flexible and mobile, the goo is designed to completely change the way you think about strategy gaming.

The goo faction starts with a single mother blob. To grow this blob a player maneuvers it over a resource area and simple sucks up the resources. The bigger it gets the more it can break apart and form new units.

"The mother goo is a refinery and a production facility unit in its own right," Zoboki said.

The faction has no structures and really no rules of movement. Goo can slide down hills, over cliff edges, through trees, across rivers. The things that stop other factions in their path are no hindrance to the goo.

Once separated, the smaller goo blobs can mold themselves into units, though this is a one way trick. Once formed, the goo unit can't turn back into a blob. These units are highly specialized and afforded their own special powers. For instance, the scout can see into terrain that would be typically blocked from the ground, essentially giving you an aircraft view of the area.

When a goo consumes an enemy unit or resources it heals all of the goo around it. And the goo grows and shrinks depending on whether it's consuming or splitting off.

Grey Goo has all of the signs of a game that could help breathe a bit more life into the real-time strategy genre, but it still seems odd that a new publisher would invest so deeply into a single game.

Grey Box's Maida said the project came together quickly, conceived as a group once Weta and Petroglyph were brought on board.

"We started pre-production on the world first and then Petroglyph was folded in pretty quickly," he said.

Why go to Weta to help conceptualize a game, I asked.

"The world is probably bigger than it needs to be for an RTS," he said. "From a capital investment standpoint we've invested a lot. Brands are defined by consumers, but we do have plans to extend this one.

"We have made an effort to make this pier more of a bridge."