Amazon revealed its long-rumored set-top box today, the Amazon Fire TV, and the diminutive device — which ships today for $99 — will support games as well as streaming video.

According to Amazon, the Fire TV is designed to outpace competitors like the Apple TV and Roku in performance: The 0.7-inch-thick box features a 1.7 GHz quad-core Qualcomm Krait 300 CPU, 2 GB of RAM and 8 GB of internal storage, as well as a Qualcomm Adreno 320 GPU, along with a dual-band wireless radio and two antennas for 1080p streaming over 802.11a/b/g/n Wi-Fi.

Amazon officials said during today's unveiling that the company doesn't intend the Fire TV to compete with gaming consoles; instead, its gaming capabilities are geared toward people who don't already own a console but may play games on a smartphone or tablet. But it will have a dedicated controller that costs $39.99 and comes with 1,000 Amazon Coins with which you can buy games. The Amazon Fire Game Controller (see below), which resembles the images that leaked last month, can be used to play games; the Fire TV remote and the Fire TV smartphone app are also supported.

Games available on Fire TV include Minecraft: Pocket Edition; Asphalt 8: Airborne, the mobile title from Gameloft; and an endless runner based on Pixar's Monsters University, all three of which were shown during the event. Amazon Game Studios is also working on original titles for Fire TV, such as a first-person shooter/tower defense hybrid called Sev Zero that will come free with initial purchases of the controller. Earlier this year, Amazon Game Studios acquired Killer Instinct developer Double Helix Games.

According to Mike Frazzini, director of Amazon Games, the average cost of a Fire TV game is $1.85 and prices start at $0.99; free-to-play titles will be available as well. Developers and publishers bringing games to Fire TV include 2K Games, Disney, Double Fine Productions, Electronic Arts, Sega, Telltale Games and Ubisoft. According to Amazon, "thousands" of games will be available on Fire TV by the end of next month. 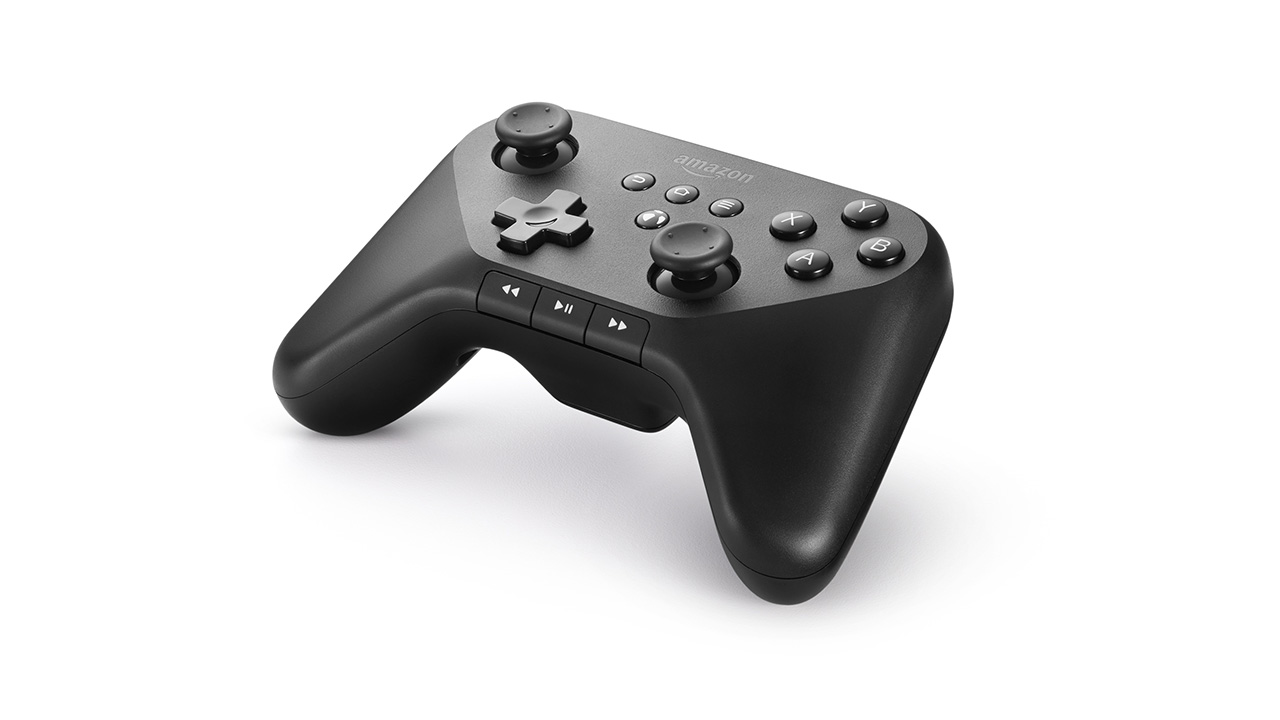 The Bluetooth-based Fire TV remote has integrated voice search: You speak your query directly into it. Amazon also demoed features such as instant access to photos on Amazon Cloud Drive; an extension of Amazon's X-Ray service for movies and TV shows, which allows users to look up details on actors and more while watching content; and ASAP (Advanced Streaming and Prediction), which predicts what you want to watch and cues it up for instant streaming.

Apps set to be available on the Fire TV include one for Twitch, along with streaming video services such as Netflix, Hulu, MLB.TV and the WWE Network. Of course, Amazon Instant Video leads the video lineup. At launch, the Fire TV will also display buying options for content from Instant Video, Prime Instant Video and Hulu Plus, giving users the ability to choose the cheapest provider.

Music services such as Pandora and iHeartRadio, along with songs you've bought from Amazon, will also be available on Fire TV starting in May. X-Ray can be used to display lyrics while a song is playing. A feature called FreeTime allows parents to set up a cordoned-off area with kid-specific content.

The Fire TV offers HDMI and optical audio, with support for Dolby Digital Plus and 7.1 surround sound pass-through, along with an Ethernet port and a USB 2.0 port. The device runs "Mojito," version 3.0 of the Android-based Kindle Fire OS. According to Amazon, that will make it "simple for developers to port their services and games over to Fire TV."