The title — based on the works of fantasy author J.R.R. Tolkien and telling an all-new story chronologically set between The Hobbit and epic trilogy The Lord of the Rings — will be available for PlayStation 3, PlayStation 4, Windows PC, Xbox 360 and Xbox One.

Shadow of Mordor follows Talion, a Ranger guarding the the wasteland of Mordor's Black Gate, whose family is slain and he himself left for dead, only to be returned to life with the ghostly powers of the Wraiths. Players will guide Talion on his vengeful quest through Mordor as he seeks to take on the Dark Lord Sauron, who is preparing to kick off the events told in The Lord of the Rings.

Participating retailers are offering the Dark Ranger bonus pack with Shadow of Mordor pre-orders. The pack includes the Dark Ranger costume skin and a new challenge mode, Test of Power. In Test of Power, players will face down Sauron's head captains and defeat them to earn power-boosting Runes. The mode also comes with its own leaderboards, on which players can measure their mettle against one another.

Check out our hands-on preview with Shadow of Mordor for more details on the game's Nemesis System, through which Talion will submit the orc peons of Mordor to his will. The companion Palantir App is also now available to download for iOS. 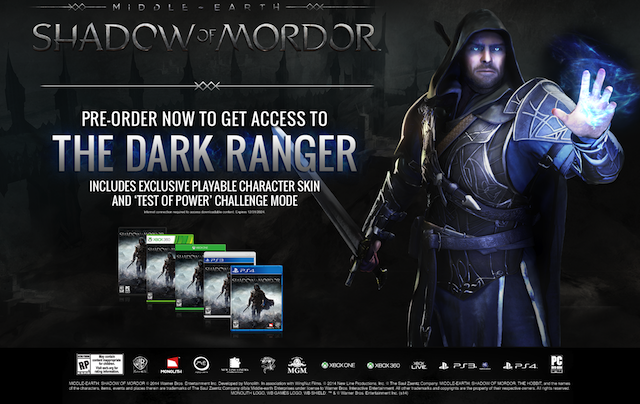