I created my own MMO and lost 100 pounds, interested in signing up?

Share All sharing options for: I created my own MMO and lost 100 pounds, interested in signing up? 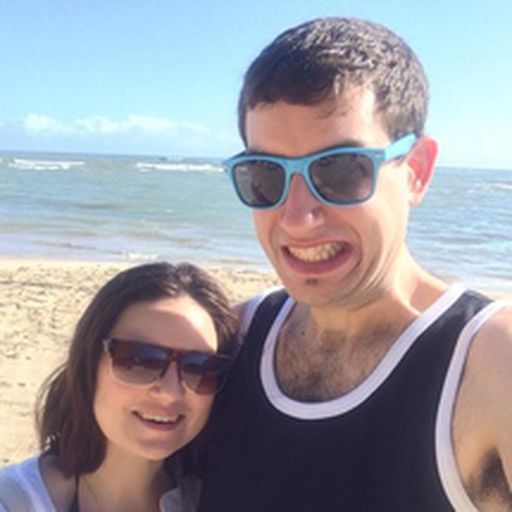 It had been this way for years.

I’d bounced around various MMORPGs since first laying my hands on Everquest as a teenager. In spite of excelling in school and at work, I found myself preferring the hamster wheel of progression and the continuous, incremental and addictive gratification I found online. I’d log on and leave my 300 pound frame back in reality.

That’s a story you’ve probably heard a dozen times before. What you likely haven’t heard before is how my seemingly "night-and-day" weight loss that followed came not by quitting an MMO, but rather by losing myself within one. Two years later, I've been able to lose, and keep off, 100 pounds.

The Road To Launch

I realized that the only way I’d be successful in changing my ways was to take what I knew and loved best, the massively multiplayer online game, and apply it to myself. I approached my body as if I were re-rolling my avatar, and I had to create a system to do so. 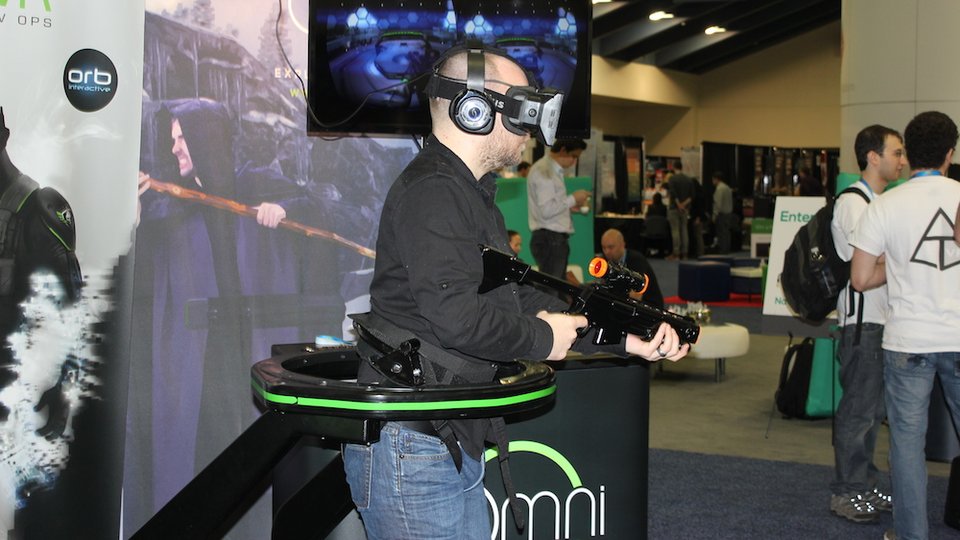 Hands-on with the latest version of the Virtuix Omni

No, I didn’t buy a treadmill and hook it up to my game to control my toon’s locomotion. Nor did I buy into the Oculus plus Omni full-body experience, though I sure as shit will when it’s consumer-ready. Those options were far too expensive and, more importantly, I hated exercise.

Instead, I decided to adopt a number of game "systems" which would quantify my "character" with the intention of identifying areas for low effort, incremental improvement. The idea was to create a large number of small changes that would add up to measurable improvement. I wanted to lose weight with as little physical effort as possible.

By my keyboard-conditioned logic, I needed to level up. I figured I needed a real-life experience bar. The heart of any MMO is its character development system and, as a long-time RPG aficionado, stats and levels were my bread and butter. I started my quest to build my fitness MMO by searching out a stat system.

My first thought was that I wanted to lose weight without working out. I had to pay attention to what was coming in.

For too long had I over-indulged in various types of delicious poison, but increasing guilt had begun to outweigh the pleasures of eating junk. If I stopped doing that, maybe I could avoid the exercise. Laziness was my guiding principle.

I learned about the basics of caloric intake as it applies to weight loss via Reddit’s immensely helpful /r/loseit. I realized I had been missing the real game all along: stats and numbers and percentages abound. This was the real-life stat system I craved.

Naturally, I wanted to automate this process as much as possible. MyFitnessPal, a free service that allows you to track everything you eat, proved to be and continues to be to this day the ideal "character sheet" for one’s nutrition. It’s an essential tool when looking to create the calorie deficit needed to see weight loss.

The idea is to track everything you take in and track what you spend through exercise. The app asks for your weight, height, age and a few other metrics, and in return it provides you with a caloric intake goal. If you can intake all the daily required nutrients and stay under your caloric goal, you will lose up to two pounds per week. There is no magic here, just numbers and discipline. Keep one set of numbers smaller than the other, and you’ll lose weight.

To help with the logging of food, the service provides a portal to a huge database of items with complete nutritional information available. You can search for items by name or scan barcodes to have items automatically added. This makes keeping a log painless, and in a weird way, fun and eye-opening.

Once the Wendy’s Baconator debuff was quantified, I vowed to never have one again.

I knew I was missing one critical component: my weight. I had for years dreaded the idea of keeping a scale around.

The Withings Body Scale is a digital scale that connects to your home network via Wi-Fi and uploads your weight, BMI, fat mass, and muscle mass to its web and mobile apps which offer rich analytical tools that help you visualize your body data.

I tracked my progress frequently, and I became addicted to the downward progress. After all, what is an MMO without progress? Every pound lost felt like a level up, and the graph reinforces the natural high of being on the right track. It was progress you could see.

But the graphs didn’t measure how I felt, and the shift in attitude and happiness alone had me addicted to this new game. The more weight I lost, the better I felt, and that led to another change. I wanted to exercise.

We had the character sheet and the leveling system. It was time to add combat.

Working out is critical to weight loss, and so I had to figure out a way to make this form of "combat" fun.

Six to Start’s Zombies, Run! started as a Kickstarter-born real-world running game but has since turned into a popular way to get people interested in running.

The premise is genius: The app tracks each run and gives you an immersive audio game to go along with it. The game tells a complete story about a world ravished by the undead wherein only a series of elite "runners" keep what remains of civilization alive.

What’s more, the cool "Zombie Chase" feature randomly triggers chases during which you must run faster than your steady running speed in order to escape harm. There was a story with characters, progression and motivation to keep going. I wasn’t forcing myself to run to lose weight, I was engaged with the game. I wanted to run to save myself and others from the zombie horde.

There’s a whole meta game involving items and RPG-like progression, but effectively, Zombies, Run! makes running into a literal game rather than the drier progress reports and goals of its competition.

Lastly, I needed a party to complete my process.

I’d read that you need an "Encourager" and a "Challenger" to really make a lifestyle change like this work, so I decided to recruit a "healer" in the form of my friend Allen, who helped to support me and joined me on my gym quests and a "damage dealer" in the form of my buddy Davi, who challenged me to better my run times and to stick with the program.

As is true for all MMOs, mine was far more fun with friends. The simultaneous aspects of co-op and competition proved compelling, and the fact that I had people relying on me and waiting on me made the entire process stick.

It felt like a raiding party; I couldn’t face the scorn of disappointment when I had to let my guild down, and so too did I remain vigilant in my fitness for fear of failing my friends.

Davi constantly kept tabs on my progress, and he doubted me every step of the way. He wanted my times and my scores; he wanted to hear about what items I’d picked up and how my town of Abel was evolving. He even started dabbling in it himself, and it wasn’t long before his rapidly-evolving town threatened to overtake my own — and that was something the competitive gamer in me wouldn’t allow. He kept me running when my interest in the game waned.

Keep one set of numbers smaller than the other, and you’ll lose weight

Davi was the personification of the leaderboard provided by many fitness apps. But I needed a real person, a real face in real life; a physical threat to my crown which couldn’t be so easily dismissed as competition of the "fitness nut who has too much time on his hands" variety — a similar strawman to the "13-year-old with too much time on his hands" I used to validate my ever-worsening PvP performance in MMOs.

Allen, on the other hand, did the opposite. He didn’t compete with me. Instead, he pitched in by motivating me to actually get out and run. If Davi was the stick, Allen was the carrot. He took me out on the town and talked me up to others; almost bard-like in his behavior, he sung songs of my victories, and his voice was the critical light in the darkness of self-doubt and self-loathing which accompany moments where I’d fallen of the wagon or failed to run.

Together, my party enabled me to succeed, challenging me to perform at my best and lifting me up when I was at my worst. Corny? Yes. Effective? Unquestionably.

With a comprehensive stat system, combat, a party and a whole world of loot out there in the form of new clothes that I "earned" as I slimmed down, I became a new and happy subscriber of the MMO that is a healthy life. I didn’t rely on a single product or system, but instead created a variety of approaches that all worked together to make me look and feel better.

I never had more fun trying to get fit, and if a clumsy analogy is what it takes, you’d be foolish not to grab the metaphorical D20s and try it for yourself. This is a deeply nerdy way to approach becoming healthier, but it got results.

It’s two years later now, and my subscription continues. I don’t min-max as much anymore; I don’t pore over the stats and long for new loot. Like a veteran MMO player, I log in from time to time just to do my dailies and keep up with old friends. I dabble in MyFitnessPal when I feel like I’m getting off track. I still run with the zombies. I still challenge Davi, and I still sing with Allen.

I lost 100 lbs over the first 12 months, slowly and steadily, and have kept them off for 12 months since. But the behavior that led me here, the metaphorical subscription to this MMO, has become habit; I know my rotation, and I don’t stray from it often. What was once laborious is now a comfortable routine of healthy playing and healthy living. 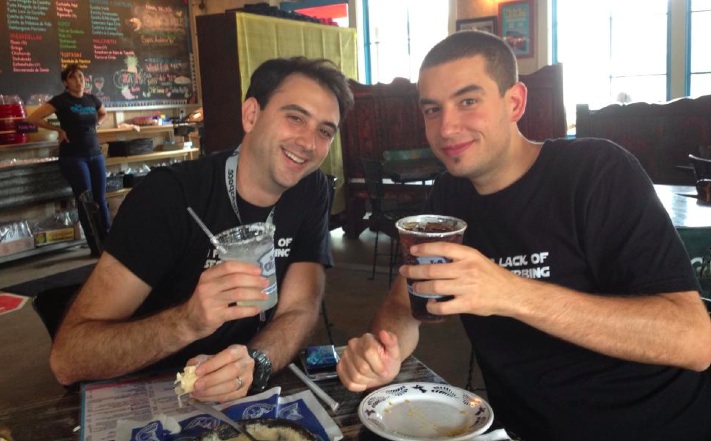 If you’re at all interested in your health and can’t resist the satisfaction of dinging and gearing up, as I couldn’t and still can’t, you should think about subscribing. The costs are low, the raids are fun and you’ll make yourself a better, healthier person.

And if you need a healer or a damage dealer, send me a /tell. I’m always LFM.