Fract is lonely, but it's also the best seat in the house

Who knew club music could feel so lonely?

Fract OSC, a hybrid of rhythm, puzzle and exploration games, abandons you inside a broken synthesizer. It's a dark and quiet cavern littered with orbs, boxes and planks that occasionally react to your existence. The environment is distant as it is cold. There are no characters, human or otherwise, and the architecture is sharp and alien. If your office copy machine could dream, perhaps this would be its fantasy: a Tron-like wasteland free of pesky humans.

Your job — as the only living thing here — is to fix the synthesizer from within.

There's no explicit instruction. At first, the goal appears to be find the stations plotted around the landscape, which once discovered, act like a web of futuristic monorail stations, transporting you from one empty space to another.

To interact with the stations, and any other objects, you'll need to trigger Fract's engagement mode, which locks your viewpoint in place and turns the mouse or the right joystick into a cursor. The engagement mode is unwieldy, and I cannot understand why it isn't limited to areas of the game that actually necessitate its use. In the early hours of Fract, I tried to engage with the world's pulsing, vibrating objects only to be rebuked with silence. 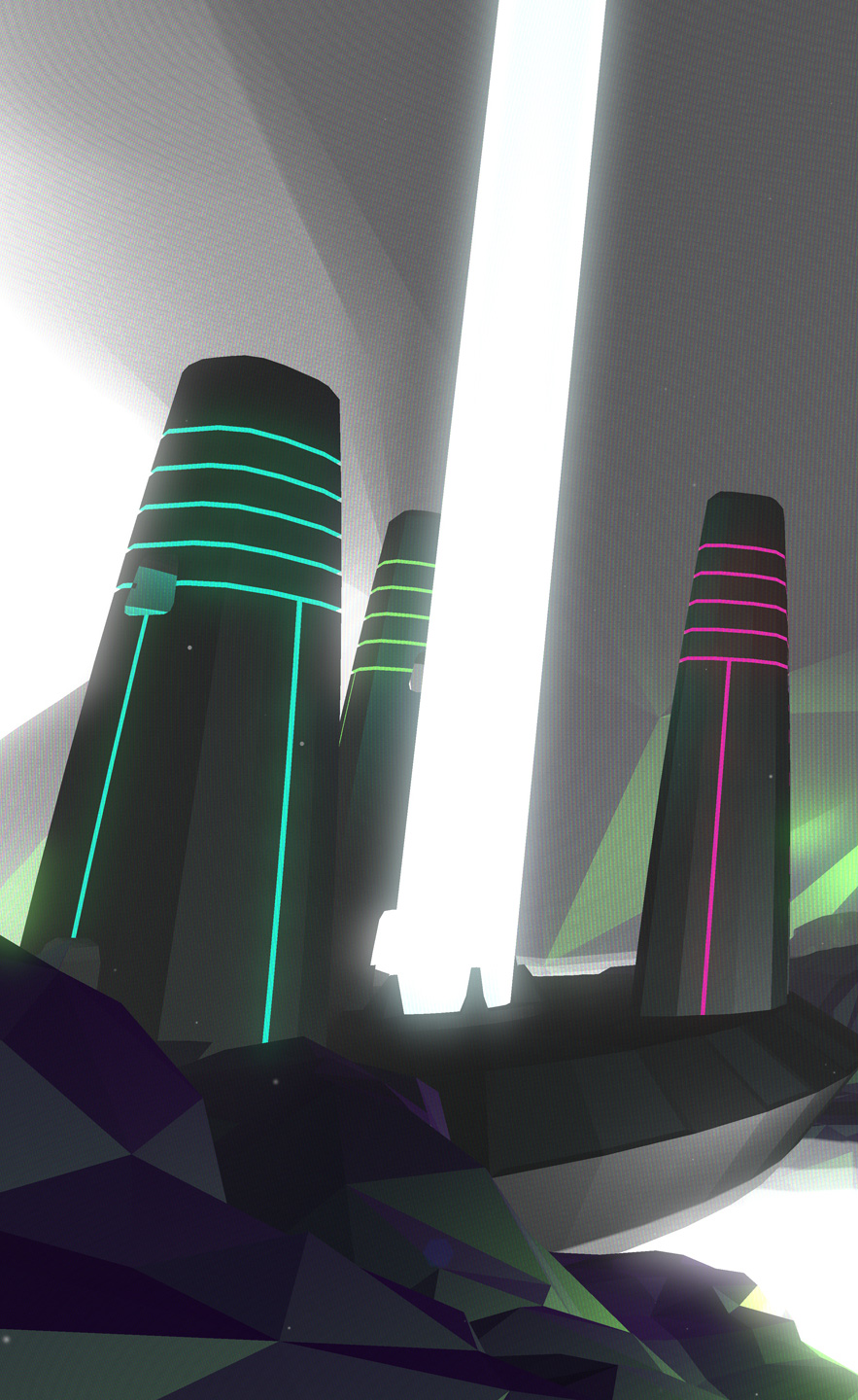 It turns out that, other than puzzles, the mode serves no purpose. There's also no option to jump, and so I occasionally found myself stuck on the wrong side of a six-inch ledge, having to commit suicide off a cliff or reset through the option menu to pass. Taken together, the experience is like being at a dance party with your feet locked in leadened boots and your arms taped at your sides.

The introduction section suffers the most from these flaws. Without the world reacting, and with exploration sending me down long paths to dead ends, I began sprinting from one end of the synthesizer to the other looking for the game to begin.

What I found was, for the most part, worth the initial confusion: a collection of beautiful puzzles set to killer music.

An interest in synth improves the experience of Fract, but isn't mandatory. Its puzzles play with 2D and 3D space, similar to what you'd find in games like Quantum Conundrum and, oddly enough, the beloved shooter BioShock. You'll be fine, even if you skipped band class.

Fract has three types of spatial puzzles, one for each territory of the synthesizer. These puzzles are hidden within discrete rooms, and involve adjusting different sorts of pieces to create pathways: In one, you move human-size blocks; in another you rotate catwalks; and in the other you connect nodes in a power grid, sending electricity through a beat machine and filling the space with sound. All of these puzzles are solved by exploring the space, then using engagement mode to adjust, modify and move puzzle pieces. Its stages are just difficult enough to make your brain turn.

At the end of each spatial puzzle, Fract challenges the player to create a specific rhythm on a synth machine. Mercifully, accompanying visual clues turn these puzzles into a vibrant game of "hotter/colder." Without knowing music, you can easily feel your way to a solution. Fract, as a whole, showcases an exquisite talent for puzzle design.

But even the best puzzles can be spoiled by falling through a platform or getting stuck between two half-foot edges again and again, forcing a reset at a base station. And the momentum is sapped if you get lost between puzzles, searching aimlessly for where to go next. 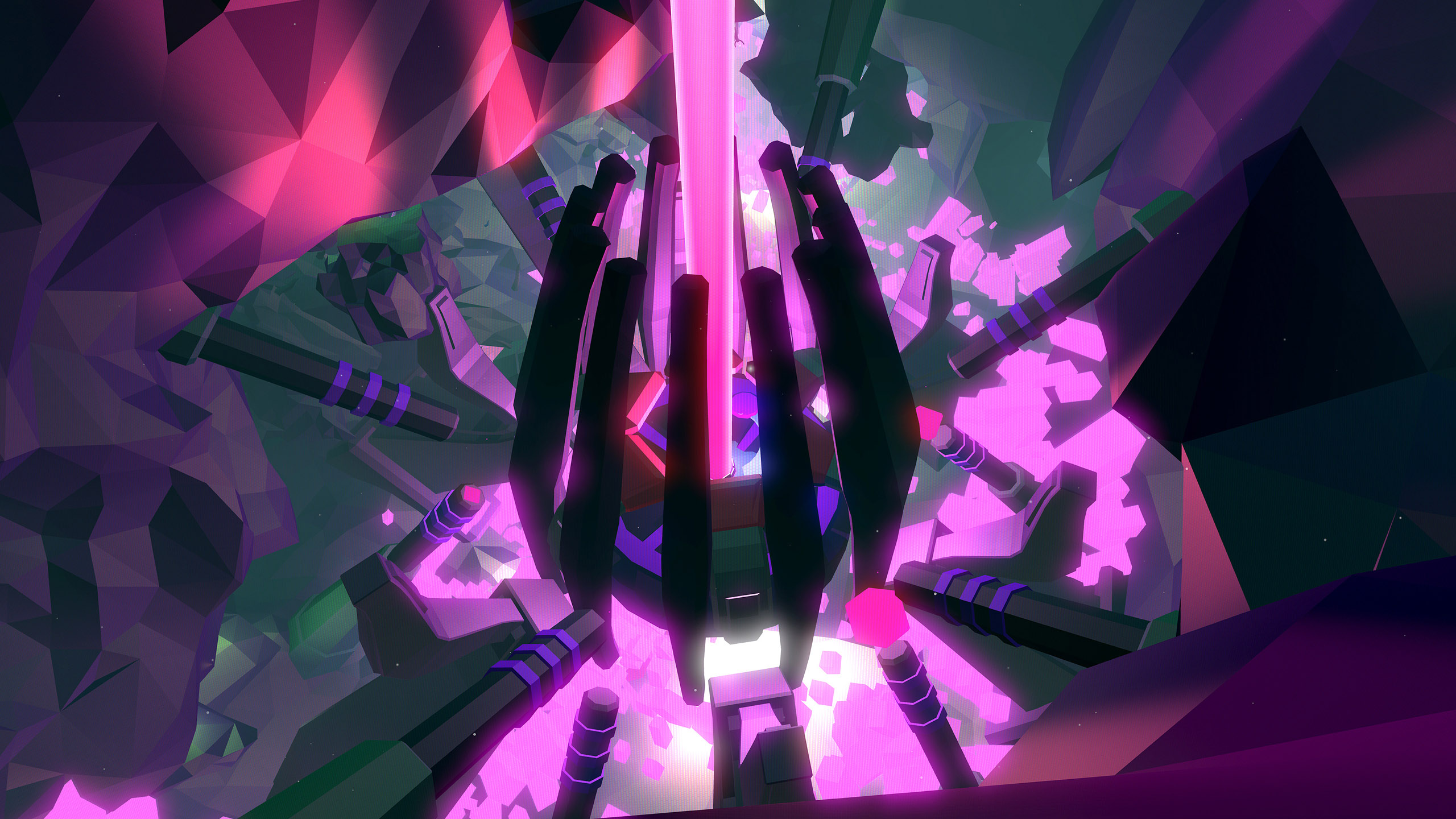 Despite its most frustrating moments, Fract's component sometimes harmonize beautifully. Completing puzzles fixes a portion of the synthesizer, filling more of the world with color and music. It also opens doors and bridges to additional puzzles, sometimes more clearly than others, allowing for more exploration. And it unlocks options in a synthesizer room separate from the main game, where you can create, upload and export your own music.

Late in the game, after you've solved enough puzzles, the world hums with energy. Traveling between locations, you pass vibrant, thumping spires and domes, a variety of different notes and rhythms shifting in and out. This should have been the reward for repairing the synthesizer, but for me, the backend struggled under the additional sounds and visuals — the frame rate dragged, and on one occasion that game sputtered, stuttered then outright crashed.

And even when every main puzzle is solved, much of the world is still dark and quiet and lonely. The effect is like walking in and out of a nightclub bathroom.

The aspects of exploration that gave me issues early on made a little more sense later, as pathways began to connect with one another. Dead ends become shortcuts to secret rooms. The more I played the more I wanted to be in Fract's world. The new paths also benefit the end game puzzles that demand you backtrack through the entire game, uncovering hidden visual clues, and either snapping a photo with your iPhone or sketching with pen and paper. After the other puzzles, a throwback like this is relaxing and charming — a good exuse to reap the benefits of bringing this machine to life.

The result of solving these final puzzles is spectacular, the world bursting and breaking and reformatting, set to intense music. Each solution felt like an ending.

Yet, I'm not sure if I finished Fract. After solving the backtracking visual puzzles for each territory, I returned to the central station where the game began. There, I found a red switch, hidden in engagement mode, that built a fantastic, but incomplete world above me. I looked for blue and green switches, but I found nothing. So I kept looking. And looking. And looking. What was above me was wonderful, but just out of reach.

For an exploration game, Fract is unusual. It wants you to explore, but its world is so alien and mechanical, that it's difficult to connect. It lacks humanity. What has pulled me through so many worlds in the past is the sense that they are lived in. I can, even in the smallest way, connect to them. I can relate. But in this world, I felt out place — like I was never doing it right. And the only hints I could turn to were the rare familiar shape or beat.

Fract wants you to explore its alien, mechanical world

Fract is lonely, but it's also the best seat in the house

By the end of Fract, I was like a club's in-house repairman. With a little spit and patience, I could fix the machine. I could fill the world with light and sound. I could start the party. Sure, I was alone, but I also had the best seat in the house: everything tuned by me for me.

Fract OSC was reviewed using a pre-release Steam code provided by the developer. You can find additional information about Polygon's ethics policy here.