A new Ace Attorney game for Nintendo 3DS is on the way under the direction of series creator Shu Takumi, according to leaked pages from the most recent issue of Famitsu magazine.

According to the leaked pages, the game will be set in Japan's Meiji era (Sept. 1868 through July 1912) and star an ancestor of the series' famous lawyer, Phoenix Wright. His name is Naruhodou Ryuunosuke (pictured below in a tweet from Twitter user Light Agent). In the scan, he is pictured carrying a sword and the article describes him as having a keen sense of justice and quick to put himself in danger.

Takumi has worked on the Ace Attorney series since the 2001 original Nintendo DS title, Phoenix Wright: Ace Attorney, However, Takumi did not work on the most recent release, Ace Attorney: Dual Destinies, because at the time he was focused on crossover title Professor Layton vs. Ace Attorney.

In February, Nintendo president Satoru Iwata announced in a Japan-only Nintendo Direct that Capcom was working on a then-untitled new Ace Attorney project. More details on this new game are forthcoming. 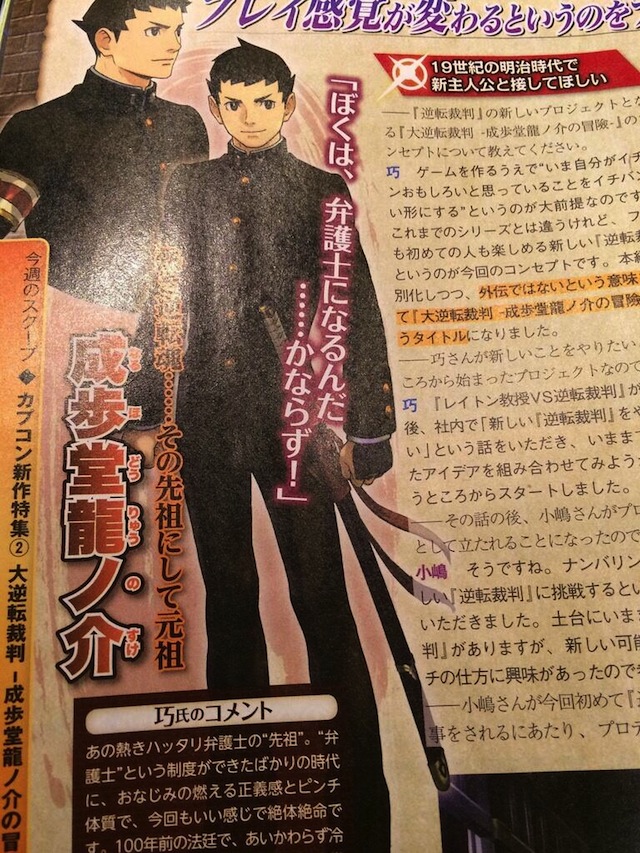