Moebius: Empire Rising was difficult for me to get through.

It's not difficult in the traditional sense — any determined player with an eye for adventure game logic will be able to complete it. No, I found it hard to get through because of its unlikable lead character, dopey writing, uneven puzzle design and omnipresent sexism.

There were times during my playthrough where I caught glimpses of what writer/producer/designer Jane Jensen (famous for her work on the Gabriel Knight series) was going for — but Moebius utterly failed to recreate the charm of a 1990s-era adventure game.

Moebius stars Malachi Rector, a genius art appraiser with a cold, misanthropic demeanor courtesy of a difficult past. Throughout the game, Malachi traveled the world, appraised rare artifacts, solved mysteries, and got involved in a mysterious government organization. The plot took a hard right turn for the supernatural a couple of hours in, and it never made much sense, even once I had grokked the concept of the "Moebius Theory."

Moebius failed to recreate the charm of a 1990s adventure 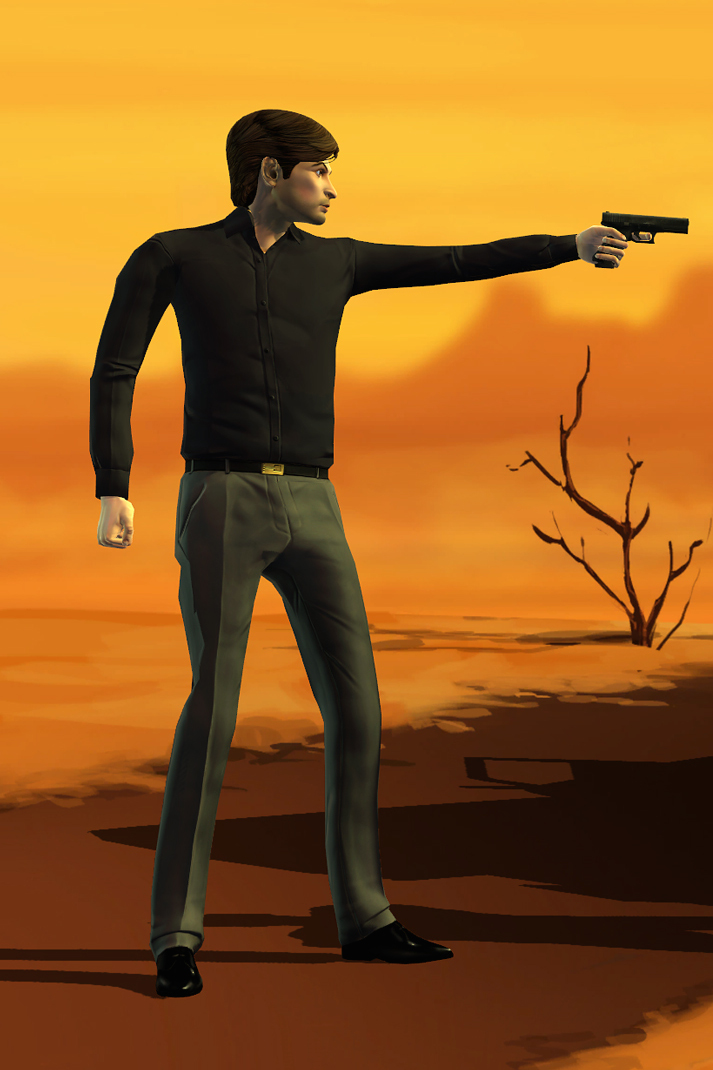 The gameplay is classic point-and-click. I clicked around scenery, "analyzed" objects and people, and managed my inventory, all in service of puzzle-solving. This runs the gamut from complex multi-screen riddles to "Analysis". Malachi has the ability to read people and determine their immediate needs and wants, most of which play into subsequent puzzles.

At first, I thought the analysis mechanic had promise. In one early scene, I needed to get an elderly woman to loosen her tongue about a murder she witnessed outside her home. I looked her up online and discovered that she used to wear a fancy Venetian glass necklace. I purchased a necklace from a local antique store and convinced her to spill the details. Typically, however, this meant I had to guess from a series of predictable (and negative) traits.

Not all of the puzzles are that fun and intuitive, though. Some are nonsensical or even borderline offensive. At one point, I had to "analyze" a librarian character to note that she was rigid and not attracted to me. Then I sent my hunky blond bodyguard to flirt with her, distracting her so I could look up restricted information. It was gross — my "analysis" painted her as a buttoned up, man-hungry woman who preferred blondes. And the solution was convoluted, involving several other sub-puzzles just to get to the flirtation in the first place. 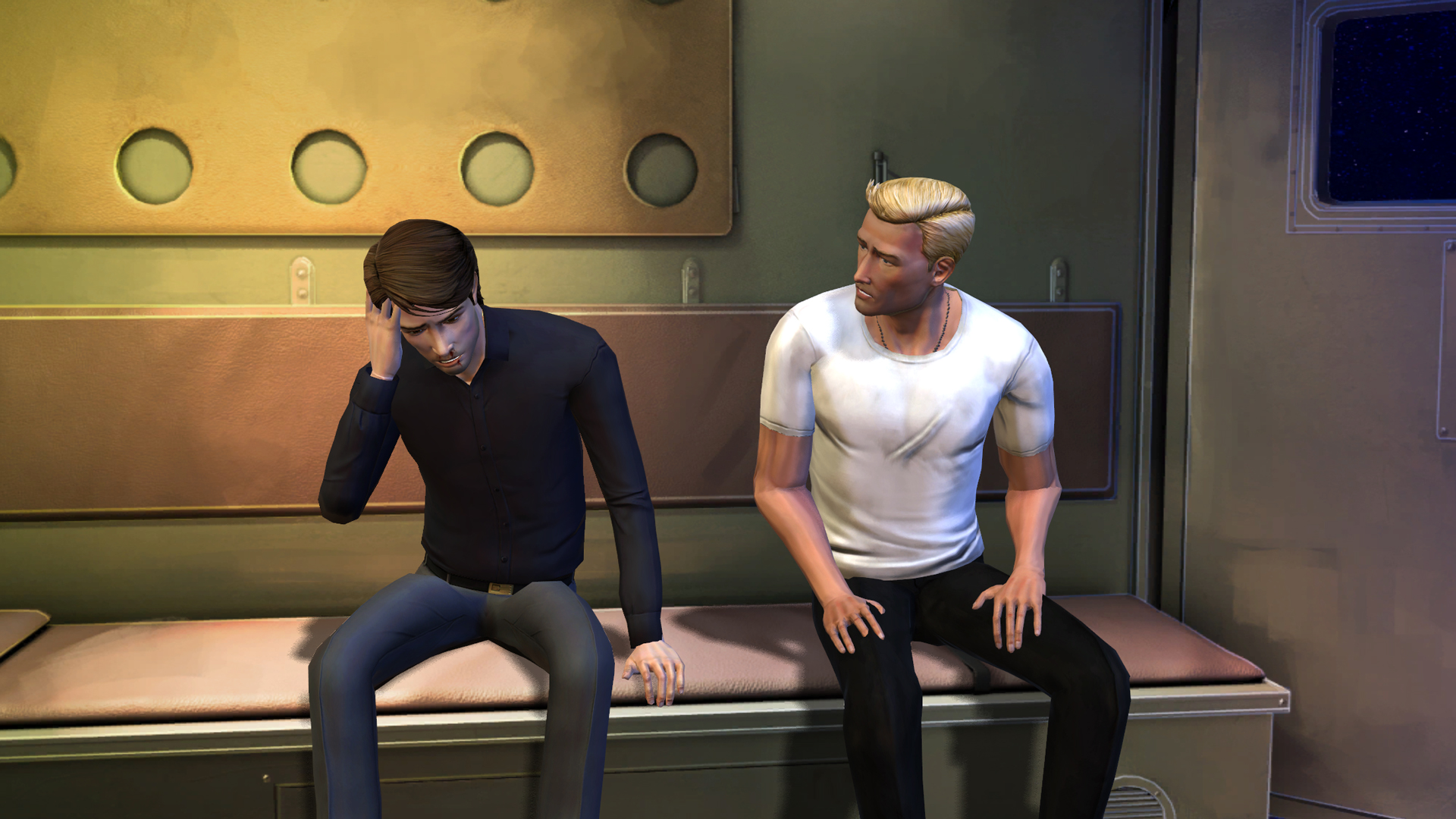 Will they or won't they?

There's sort of a queer romance in Moebius, between Malachi and his bodyguard, David. While it's not exactly explicit, the queer undertones are played with all the subtlety of a sledgehammer — at one point, Malachi's assistant Gretchen, attempting to hit on David, asks him, "So, you're straight, then?" She then warns him that Malachi will break his heart.

Cutscenes picture them as a timid maybe-couple, with long, lingering gazes at one another. David is bland, but he's the closest thing to a likable character in the game — a muscle-bound, all-American boy that makes Malachi slightly less brittle (even tolerable, at times). The romance, such as it is, is a missed opportunity, but this was still my favorite part of Moebius. It was a touch of humanity in an otherwise vapid, unappealing world.

Analysis was almost always problematic, especially when it came to female characters. Everything about a woman would be reduced to clues about her appearance. A woman's nicely done hair and makeup meant she was "vain." The aforementioned librarian was "sexually frustrated" because she wore bright lipstick. Another lady was a shallow party girl because she wore bright clothes.

Perhaps the most egregious example of Moebius's sexism occur's during the puzzle where I needed to analyze a young girl (her name and descriptor was literally "teenage girl") who was dancing around, listening to a portable CD player. I had to determine that she "came from a poor family," and then bribe her with an older generation iPod so that she would bend over and show a skeevy businessman her rear end. This was all so that he would be distracted and I could steal his VIP badge. Later, I had to hold a woman at knifepoint and threaten to cut her face so that "no man would ever look at it again." It was awful, and par for the course as far as Moebius and its protagonist were concerned.

Malachi is the rotten core that Moebius was built around. He's a misanthropic, misogynist asshole with a cardboard personality and no redeeming features. His over-the-top snobbery seems at times like hamfisted parody — he makes fun of other characters' tastes in art and sneers at working-class people. But Malachi's antics are never particularly funny, and the tone of the writing felt mean and stuffy.

Everything in Moebius feels like it's from a more regressive time. If Malachi's smartphone wasn't such an important gameplay feature, I would've guessed the game took place in the early 1960s or even '50s.

The graphics are a throwback as well, with low-res textures and janky 3D animation that meshes poorly. But worse, sometimes art didn't load at all, with characters standing in some kind of black-box experimental theater. In this instance, I couldn't see anything in the room. That's game-breaking in any genre, but certain death in a point-and-click adventure. I had to "pixel-hunt" without seeing any of the pixels.

Ultimately, Moebius' technical glitches and visual blemishes mean nothing. In a stronger game, with good writing and consistent puzzle design, they'd be small distractions. But Moebius' ugliness goes right to its core, with a misogynistic tone, awful main character and poor storytelling. I was grateful when I finished it, not because I found the conclusion stirring, but because it meant I didn't have to spend any more time with Malachi Rector.