Share All sharing options for: Minimum offers multiplayer shooting without the frills

Minimum has the look of a shooting prototype; boxy, skinless models leaping about in a plain, undecorated world.

But it's actually a work of intense design. Getting something simple to look sophisticated is the magic trick of minimalism. In Minimum, various shades of gray and beige work with stark, straight lines and tiny splashes of color to produce that rare thing, a combat world that looks fresh and interesting.

The game itself borrows from classic multiplayer team-shooters of the 1990s as well as more modern MOBAs, creating frenetic but tactical gunplay along barrier-dotted lanes. There is a heavy emphasis on power progression inside individual games.

Minimum is due to be released for Windows PC on Steam Early Access in the next few weeks. Published by Atari, it's been developed by Human Head. The game was originally created by defunct developer Timegate (F.E.A.R Extraction Point, Aliens: Colonial Marines) before that company went under.

"Timegate had to close down, but they were really happy with this game," explained project lead Norman Nazaroff. "Atari had been talking about being the publisher. We have some guys from Timegate and so when Atari came to us to finish it our Timegate guys got super enthusiastic so we took a look at it, played it internally and we were excited about finishing it."

There was also an emotional need for Human Head to take on this project. Last year the company's Prey 2 project was taken away by publisher Bethesda and given to another developer, an event that caused some bad feeling at the time. "Human Head has some experience of not being able to bring titles to the fans that we know they were excited about," added Nazaroff. "We know what that feels like. We said, ‘we should finish this'."

Minimum's distinctive look was one of the new project's attractions; it represented a design challenge. "You would think that the simplistic blocky art style is just easier to make than the higher fidelity stuff," said Nazaroff. "But it's like the 8-bit art you see now in a lot of indie titles. There is a good way to do this and then there is a bad way.

"The difference between this and a prototype is that we have put a lot of thought into trying to minimize things in a way that maintains the essence of what they are. On the first pass on any art assets in the game, like a weapon, we go back and take stuff and detail out while still trying to maintain a nice distinct silhouette. We have a very specific color code and we try to use it sparingly to add pop and a distinctive style."

Minimum has the look of a game that has been designed with care. Despite its name, there is generally a lot going on during gameplay, and even if the assets and environments are not colored-in or texture mapped, they are busy places.

In the 5-vs-5 battle arenas you play as a faceless fighter with a blocky humanoid form. A variety of customizable loadouts are available, with weapons ranging from melee katanas, to shotguns, plasma rifles and sniper guns. Players can carry two weapons (not of the same class) as well as a device, like a frag grenade or a placeable turret. Each time you make a kill, your weapon becomes more powerful, up to a maximum of five upgrades. Death wipes out your earned powers.

But you can also craft items in-game, by picking up ingredients shaped as various polygons and shards. These crafted armors add extra skills (like a double-jump) which stay with you throughout the game. This element was added by Human Head.

"We really liked the killstreak power leveling but it felt a little too harsh in the sense that you could lose all your benefits," said Nazaroff. "We wanted to give another feeling of progression."

Minimum also features a longer time-frame crafting system in which players gather XP in order to unlock schematics that can create new guns, based on gathering resources. These guns can then be traded via Steam Workshop.

"When we first obtained Minimum we had a solid, fun experience, but we wanted to add more content for players," said Atari CEO Fred Chesnais. "One feature that everyone agreed would add to the game would be if players could build things to use in-game. This is how the blueprint crafting system was born and it has turned out to be a cool way to create unique weapons." 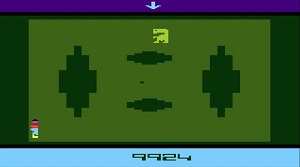 The Early Access launch offers Titan mode in which each team protects and nurtures a series of periodically spawning AI giant robots. By killing small AI Creeps, your team's Titan gathers power and strength. There are two maps at launch; one is set in a factory while the other, offering wider lanes and greater spaces, is desert-themed.

Other modes planned for the future include team deathmatch and "some co-op PvE type stuff," according to Nazaroff. "We definitely want to focus on team strategy. That is the direction we want to go in, but the point of the Early Access is to find out what the player wants."

Minimum's solid mechanics make it a fun shooter. But with so many multiplayer shooters available, its distinctive looks may be a draw for many players, seeking something different. "We've seen that really hi-fi look but it's nice to take an approach that is different artistically," said Nazaroff. "Minecraft and Borderlands show that a clean, bright look that is clean and distinct can be very popular."