MLB Perfect Inning: Can a baseball sim work on a mobile device?

Share All sharing options for: MLB Perfect Inning: Can a baseball sim work on a mobile device?

Sports are notoriously difficult to simulate in a video game. There's so much going on under the hood that it requires a lot of processing power, and so many different actions in the game that a typical control scheme uses most of the buttons and sticks on a standard console controller. Those factors make it seem like it would be near-impossible to do a simulation baseball title on a mobile device, but one publisher is giving it a shot this spring.

Gamevil, which has offices in Seoul, South Korea, and the Los Angeles area, is working on MLB Perfect Inning, a baseball title aimed squarely at die-hard fans of the sport. Major League Baseball Advanced Media, the league's digital-media division, makes its own mobile games — it released R.B.I. Baseball 14 this year and had two other titles last year, all of which were geared toward casual players. But Gamevil is aiming to offer something that hasn't really been seen in the mobile market for any sport: a licensed, full-fledged simulation sports game with a deep, complex management component.

MLB Perfect Inning is in development at the Korean company Gong Games, which has plenty of experience making baseball games — it's the studio behind a series of Asia-only Korea Baseball Organization titles for Gamevil. The publisher gave Polygon access to a beta version of MLB Perfect Inning on Android, and after spending some time with it, we were surprised at how well Gong Games and Gamevil have been able to recreate MLB action on a mobile device.

The focus of MLB Perfect Inning is its season mode, which allows you to pick a team and play its full 162-game schedule for the 2014 season, or abbreviated versions of it. We began with the New York Yankees, who kicked off their season in Houston against the Astros, and were impressed with the game's faithful recreation of Minute Maid Park as it appeared on our Samsung Galaxy S4.

MLB Perfect Inning is played entirely with touchscreen controls, and the developers have implemented them smartly. The bottom-left corner contains a virtual joystick, but the buttons in the bottom-right corner change depending on the situation. The game's pitching setup is reminiscent of the Pulse Pitching system in Sony's MLB The Show series. You use the left stick to choose a pitch and aim it in the strike zone, then tap on the pitch button as a circle expands and contracts around the baseball icon; if you time it poorly, you'll serve up a meatball right down the middle. When the hitter makes contact, your fielders will automatically move toward the ball and catch it, but it's up to you to make the throw to the appropriate base.

We excelled at pitching, but failed miserably at hitting

We excelled at pitching, but failed miserably at hitting. As it stands, it's tuned to be way too difficult. Pitches aren't as fast as they should be — fastballs often come in below 80 miles per hour — so we frequently swung too early. And breaking pitches seem to have too much late movement, so it's difficult to judge location. (This was true even with the default hitting option, where all you have to do is time your swing correctly; you can change the settings to you also have to move the bat to the ball in the strike zone with the left stick.) We rarely made solid contact, and hits were even more scarce.

MLB Perfect Inning does manage to squeeze in an impressive array of specialized baseball situations that casual titles often leave out. For example, it's possible to steal bases, attempt to throw out would-be base stealers and make pickoff throws. From our limited time with the game, it seems like the developers did a good job of implementing the variety of unique actions in baseball with controls that are well-suited to those actions and to the touchscreen-based mobile platform. And fans will likely appreciate fine details like customized batting stances and pitching motions. 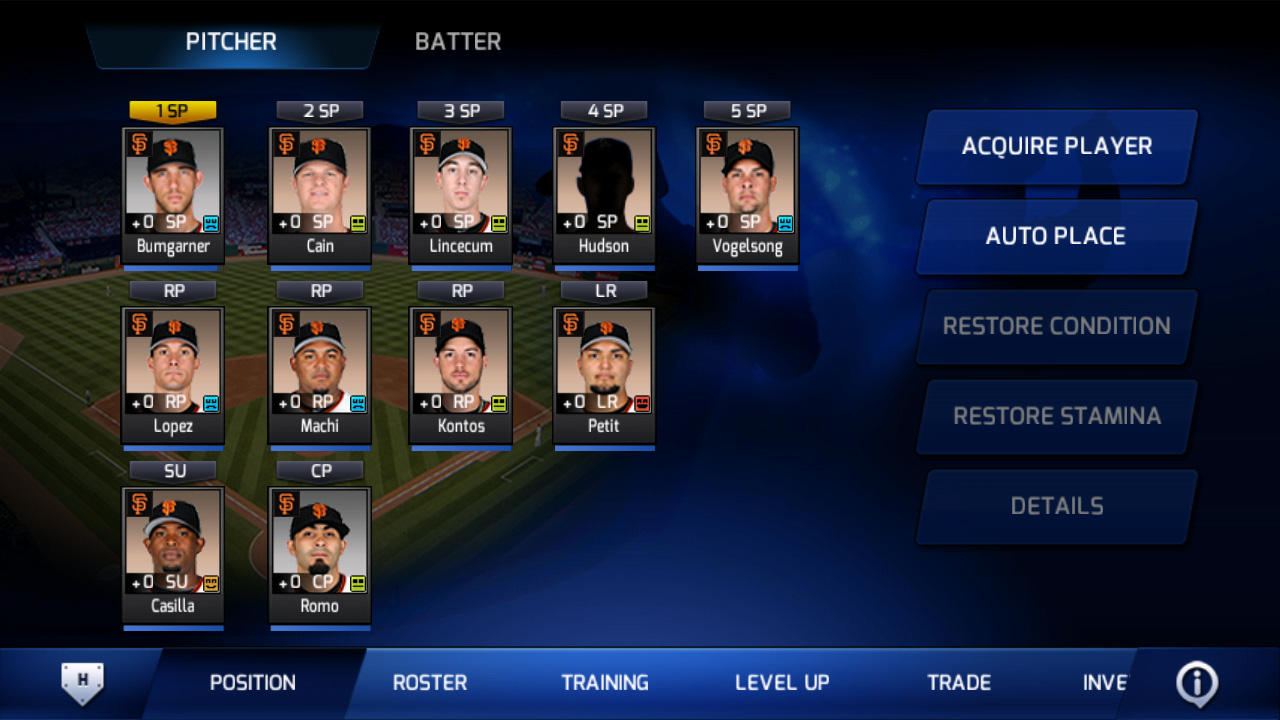 There's also a lot to MLB Perfect Inning that takes place off the field. It's a free-to-play title with a monetization structure based on digital cards used to build up your team. As you play, you earn in-game currency known as gold, which can be spent on training players to improve their attributes. Gold can also be used to buy cards of baseball players and other items; athletes' cards come in bronze, silver, gold, platinum and signature varieties.

we felt overwhelmed at the outset

There are two basic ways to play MLB Perfect Inning: Most people will either attempt to upgrade all of the existing players on their baseball club of choice, or collect athletes from across the league to put together the ultimate fantasy team of all-star players. There's a second virtual currency in the game called stars; you can purchase stars with real money, and use stars to buy gold — or choose to buy cards with stars themselves. The economy is one of the main elements of MLB Perfect Inning that Gamevil will be tuning during the closed beta, so it's impossible to say at this point whether the business model will feel fair. (It's also impossible to spend real money within the game at this point.)

Although MLB Perfect Inning contains pages of static screens that seek to illustrate the complicated machinations of building a team of superstars, we still felt overwhelmed at the outset, and had to reach out to the developers for a detailed explanation. Hardcore gamers may catch on just fine, but they may still feel frustrated at elements like the hitting. For now, it's notable that Gamevil and Gong Games have delivered a playable simulation of baseball on a smartphone; if the companies can refine the solid core and get the monetization right, MLB Perfect Inning could offer something unique and special.

Gamevil is starting closed beta testing for MLB Perfect Inning today, and is aiming to launch the game in May on Android and iOS.