Sportsfriends launches May 6 on PS3 and PS4, PC 'some weeks after'

Share All sharing options for: Sportsfriends launches May 6 on PS3 and PS4, PC 'some weeks after'

Sportsfriends, Die Gute Fabrik's compilation of four frenetic sports-esque games designed for local multiplayer action, will be released May 6 in the Americas on PlayStation 3 and PlayStation 4, the studio announced today.

The game will launch May 7 in Europe and Australia for €13.99; in the Americas, it will cost $14.99. The Linux, Mac and Windows PC versions of Sportsfriends will be available "some weeks after" the console release, according to the description for the game's launch trailer on YouTube. Die Gute Fabrik originally planned to release Sportsfriends last fall, then said it was aiming for January before delaying the title again.

Sportsfriends supports Sony's cross-buy initiative, though only in one direction: Buyers of the PS3 version will also receive a copy of the PS4 version at no additional cost, but the offer doesn't work the other way around, so anybody who's interested in playing either of those two versions should purchase the game on PS3. 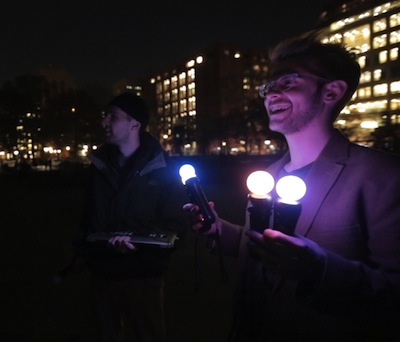 While J.S. Joust is traditionally played with PlayStation Move wands, all four of the Sportsfriends games can be played with controllers on both PS3 and PS4. J.S. Joust supports up to seven players on PS3 and as many as four on PS4 (a hardware limitation); when played with a DualShock 4 on PS4, the game uses the controller's light bar and speaker. The PS3 version of J.S. Joust will allow players to use their own music with the game.

Sportsfriends began as a Kickstarter project in late 2012, and only met its funding goal on the campaign's final day. Die Gute Fabrik confirmed today that Kickstarter backers who requested a PS3 copy — a PS4 version wasn't confirmed until last October — will receive PlayStation Network codes that unlock both the PS3 and PS4 versions.

"We literally couldn't have made Sportsfriends without all our enthusiastic Kickstarter backers and fans," said Die Gute Fabrik on the PlayStation Blog.

You can watch the Sportsfriends launch trailer above.