Hearthstone: Heroes of Warcraft has the rare and uncanny ability to pull in people who don't care about collectible card games.

Case in point: myself. Before checking out Blizzard's new free-to-play card game, I had played maybe two matches of Magic: The Gathering in my whole life. I had so little interest in card games that when Blizzard announced Hearthstone, I rolled my eyes.

I started playing Hearthstone's beta release last November, and hardly a day has passed since then that I haven't loaded the game up for at least a round or two. It's not just a great game — it's a great introduction to one of gaming's most intimidating sub-genres.

when Blizzard announced Hearthstone, I rolled my eyes 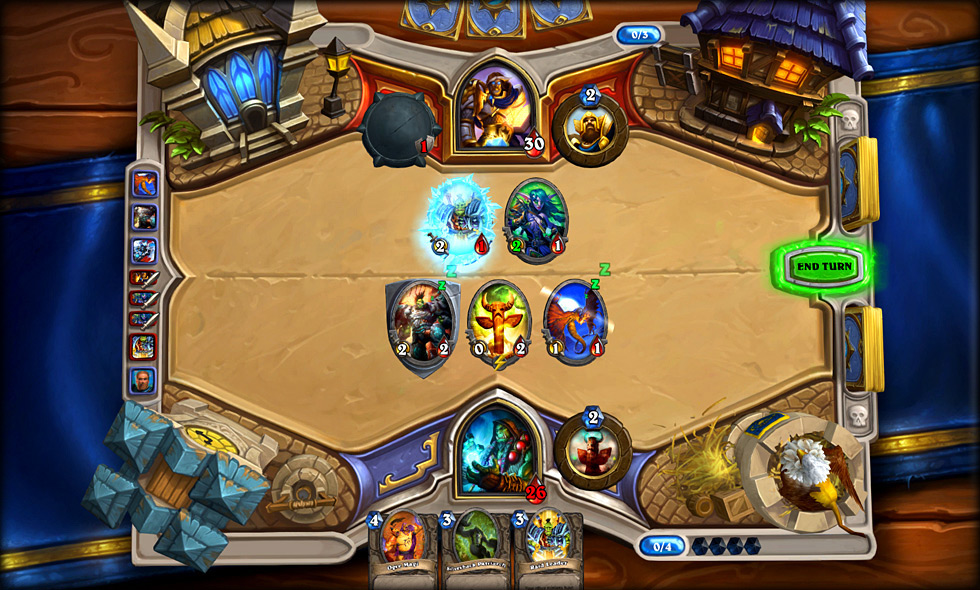 As its subtitle suggests, Hearthstone draws its subject matter from Blizzard's ever-popular Warcraft universe. The setup — insofar as there is one — puts you on a stool at a dingy inn somewhere in the mythical realm of Azeroth, playing the second-favorite pastime of the Horde and Alliance, just behind eternal warfare: a friendly game of cards.

At the start of a Hearthstone match, you pull three or four cards (depending on if you're going first or second) out of your constructed deck of 30 total cards. There are a few different card types — weapons, spells, minions — but your end goal is the same: burn down the opposing hero's 30 health before they take down yours.

Hearthstone's connection to the Warcraft universe is clearest in its choice of nine heroes — each representing one of the same nine classes available to players of World of Warcraft when the MMO launched in 2004. As a Warcraft fan, the classes familiarized me to the game even as I was learning a whole new set of rules. They also add a huge number of strategies that rotate depending on which hero you select and who you're up against.

While Hearthstone has a large pool of general cards to draw from, there are also class-specific cards. A mage has a lot of spell cards that do huge amounts of direct damage, a priest gets unique cards and minions centered on healing and buffs, and so on. The breadth of cards available and the way they interact with other cards provides, at the very least, the convincing illusion of an endless number of combinations.

Having played Hearthstone regularly for almost six months now, I still often come across match-ups I've never experienced. One need only look at some vaunted "wombo combo" videos — many of which utilize cards previously written off by the community as useless — to get an impression of how much thoughtfulness has gone into the design here.

It's not just how the cards combo together, but also how they can be used to counter one another. One of the most commonly used cards in Hearthstone several months ago was Sylvanas Windrunner. This legendary minion can attack for five damage and has five health, but what really makes her special is her "deathrattle" ability. When Sylvanas is cleared off the board, she takes control of a random enemy minion currently in play. So if you play Sylvanas, not only does your opponent have to expend the resources to get rid of her, they're likely to lose another minion in the process. 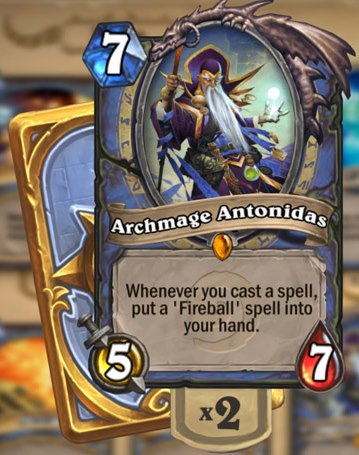 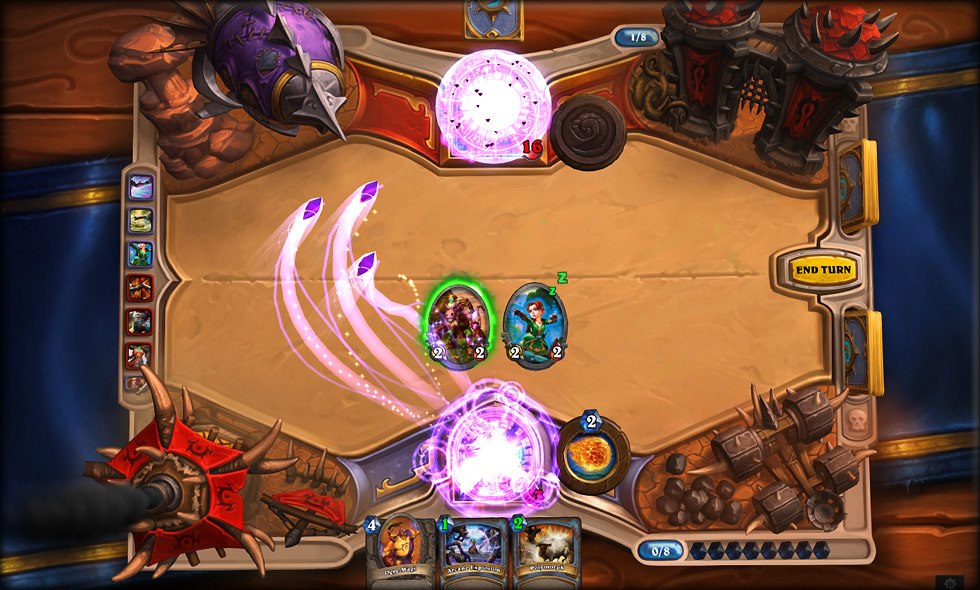 By the time Blizzard released the iPad version of Hearthstone earlier this month, the game had taken up enough of my life that I secretly hoped the portable version would be a wreck. With apologies to any coworkers or family members who were hoping to talk to me ever again, I have to report that the iPad release actually works nearly flawlessly.

Once you hook your Battle.net account up to the iPad version of Hearthstone, you're able to swap between PC and iPad using the same deck, same progress in the rankings, etc. I was happy to be able to pick up arena runs on the iPad where I left off on PC, and it made it easier than ever to sneak in just a couple more rounds before bed.

While Hearthstone's simple point-and-drag gameplay is perfectly suited to the iPad, the game's heavy focus on animations comes with a small price. According to multiple reports online as well as our own tests, the game runs poorly on first- and second-generation iPads, as well as iPad Minis. However, if you have a third-generation iPad or later, it provides a great way to experience Hearthstone.

But in Hearthstone, even cards that seem overpowered to begin with have ways to play around them. Some minions and spells have a silence effect that removes Sylvanas' deathrattle. If you're a priest, you can use a spell card that instantly kills a minion with five attack or higher without needing to play a minion of your own. If you're a rogue, you have abilities that put minion cards back into your opponent's hand, forcing them to play it a second time.

These counter-strategies seemed opaque at first, but the more I played, the more naturally they came together, switching up my deck as popular cards shifted. Veterans of other card games or competitive titles know this as the "metagame." When the metagame shifts — when favored cards or classes change regularly — it's a sign of strength in a game's design and the health of its community. I've yet to see a week go by where Hearthstone's metagame hasn't shifted. It may not have as many limitless variations as other card games of choice, but that doesn't mean there are simple answers or class and deck combinations that win against everything else.

The flexibility of strategies in Hearthstone also means you won't need to pay for endless packs of cards just to build up a worthwhile deck. Hearthstone is free-to-play, with microtransactions in the form of buying packs of cards. But you can also purchase them using limited in-game gold funds, as well as some core cards unlocked by leveling up the different classes. Blizzard has struck a delicate balance here: By doing daily quests to build up gold, I was able to continue purchasing packs of cards and build up a solid collection at a reasonable rate without getting frustrated. In fact, I think slowly gathering cards this way is preferable to just buying a ton at once; not paying money forces you to take the time to learn each class and each card that you pick up. 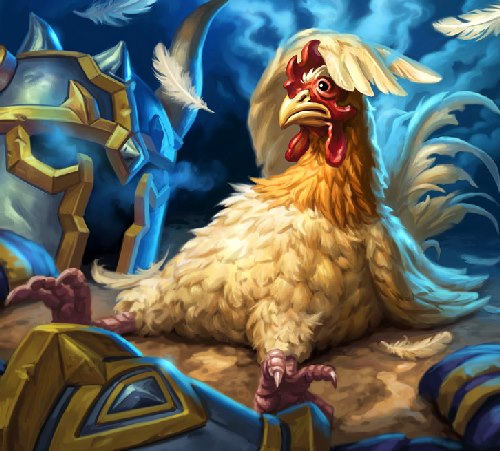 If there are one or two perfect cards needed to complete your dream deck that you've had no luck getting in packs, Blizzard has implemented an ingenious system to help out. Unwanted cards can be broken down into "arcane dust," which you can use to craft new cards. Even the rarest of legendary cards can be yours if you're willing to put in the time and effort to save enough dust. This smart concession helps ensure players can get what they want without spending a cent.

In addition to card packs, you can spend in-game gold (or real money) on the arena, a twist on Hearthstone that quickly became my preferred mode of play. In arena your carefully constructed decks are swapped out for a deck that you put together on the fly. Each round of the draft, you must choose one of three cards pulled at random until you've got a full deck of 30. Then you go up against other players who have done the same.

It's entirely possible to draft badly enough that winning even a single game becomes a struggle. But the arena pulls from a complete collection of cards — even ones that you don't own yet. I loved finding new cards and adapting to cards I wouldn't normally use. It forced me to experiment with completely different strategies than regular competition, another sign of Hearthstone's depth.

Though I'm already eager for Blizzard to expand on the number of cards offered, I don't see the appeal of that depth running dry any time soon. Between its friendly design and its flexible approach to a free-to-play economy, Hearthstone has successfully pulled me into a genre that I didn't care about in the least. But even more incredibly, it's kept me rapt longer than any games I've played in years, and shows no signs of letting up.