Kirby Triple Deluxe is smarter than it looks.

Kirby games often seem like a softer alternative to Nintendo's other mascot platformers. The pace is a little slower, the platforming is more forgiving, and Kirby himself is a formidable little guy — if someone gives him trouble, he just eats them. He doesn't need to worry as much about bottomless pits — as he can float almost infinitely.

Kirby: Triple Deluxe starts with the same kid gloves. It opens with easy, pastel-colored stages that seem suited to younger or more inexperienced players. But Kirby: Triple Deluxe didn't take long to reveal its true nature. It's an intelligent, sassy little platformer that isn't afraid to change things up.

The story is bare-bones, but all you need to know is that it's your job to control Kirby, the titular pink puffball, through dozens of 2D platforming stages. It suits the fanciful style of the game. 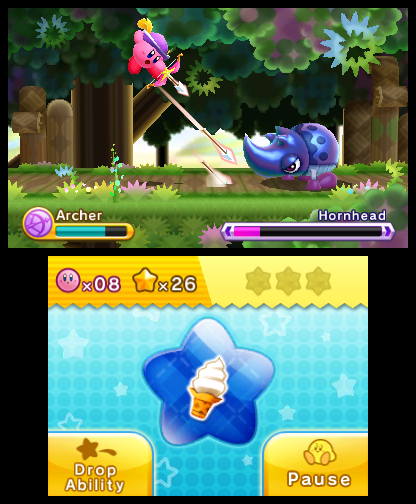 Kirby is a versatile hero — he can inhale enemies to inherit their powers. There are always several to choose from — elementals like fire and ice, a ninja power that allows you to throw knives and slash at enemies quickly, and my personal favorite — the rock ability, which allows you to turn to stone, damaging enemies and rendering Kirby immune to their advances. The challenge in Triple Deluxe comes mainly from choosing the right power to suit the job at hand. Much of the fun comes from figuring out what outlandish thing the game wants you to do — whether it's to eat a creature to steal his weapon, defeat a motorcycle mini boss with acrobatic flips, or suck pieces of scenery up to rearrange the stage.

The anything-goes attitude also comes through in Triple Deluxe's level design. From the beginning, the game's stages have an emphasis on the interplay between foreground and background elements. This starts very simply — I'd hit a switch in the foreground to make a bridge appear in the background, then warp over to that plane and move on. But these elements got trickier — and smarter — as Kirby: Triple Deluxe went on.

One reason that Kirby: Triple Deluxe leaves a lukewarm first impression is its overall aesthetic. While it's bright and colorful, it has nothing on previous games in Kirby's recent history — particularly series highlight Kirby's Epic Yarn, which looked like a living cartoon quilt. Triple Deluxe's level design gets complicated enough that the game benefitted from a simpler aesthetic, but it can't help but look drab next to it's yarn-built predecessor.

Some later stages had me skipping rapidly between planes, or shooting targets in the background before switching over and clearing up the food and coins left behind. Other levels functioned like obstacle courses — I had to move fast to avoid getting smashed. And nearly all of the boss fights — and mini-boss fights that often popped up mid-level — featured background and foreground elements, which I needed to dodge as they popped in from other parts of the screen. Kirby: Triple Deluxe always made clever use of all the screen real estate, as well as the system's 3D effects.

Much of the bonus content also makes use of this interplay between foreground and background. Many of the best treats — sunstones that allowed me to progress in the game and optional keychains — are hidden in plain sight. I always had the tools I needed — the fun was in figuring out how to put them together.

The biggest addition to Kirby: Triple Deluxe is the hypernova power, which gives Kirby a black hole-like ability to suck up massive quantities of enemies, objects and even scenery. Early on, the game had me eating giant trees that were in my way, or hoovering swarms of enemies. It was visually interesting, but the first few instances of hypernova had me worried that the new ability was just a gimmick, as the power shows up only in prescribed circumstances. To my delight, it ended up being a feature that constantly saw new and creative uses throughout the game.

I had to use hypernova to move snowballs through obstacles and create giant snowmen and snowwomen. I used it to activate a fan-powered hovercraft for safe passage over a sea of lava. There were even times I needed to hoover up giant vegetables and throw them in a perfect arc at my enemies. Kirby: Triple Deluxe kept springing new and inventive uses on me, keeping things fresh throughout.

This flexible design is consistent throughout the game — the longer I played, the more I fell for Triple Deluxe's playful logic. The level design reached a high point in the sixth world, with the most creative and devious stages in the game.

Hypernova saw new and creative uses throughout the game

Kirby: Triple Deluxe is smarter than it looks