Share All sharing options for: Destiny: The 10 key questions

Getting some hands-on time with Bungie's Destiny, as well as multiple developer interviews, was a useful exercise. But for those of us curious about this new game, plenty of big questions remain.

During the recent press event at Bungie's Bellevue, Wash., offices, there were lots of questions being fired at devs, from journos who had traveled into town from all corners of the globe. Bungie was not always keen to share. The one answer that kept coming was "we'll be talking about that some more at E3."

So, here's a quick update, in the form of 10 questions, on what we know about Destiny, and what we want to know more about.

What is Destiny all about? 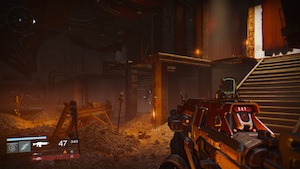 From the makers of Halo comes another epic space-age shooter. Following the arrival of a large, mysterious orb over Earth, humanity enters a "golden age" of space exploration, colonizing the solar system. An alien invasion brings humanity to the edge of annihilation, and destroys the orb, which seemingly sacrifices itself to save the humans. Hundreds of years later, humanity recovers enough to bring the fight to those aliens. You are a "Guardian" who fights for humanity's cause, in the ruins of lost civilizations.

How does it play?

Based on our short demo, it's very much a successor to the Halo series. You run, jump, dodge, shoot and try to find the right weapon for the job. Bungie has created a large, attractive world encompassing multiple planets. Players are encouraged to upgrade their characters and to play the game in a social way, with co-op very much a part of the game-world.

"This is a Bungie game through and through," said head of community Eric Osborne. "That beating heart, the way you use the controller and how smooth it feels. You are a powerful actor against enemies that are worthy to fight, that will change tactics based on their rich intelligent behaviors. Hopefully it feels really familiar for a lot of players."

Why is it such a big deal?

Apart from being the next franchise for Bungie, it is also a huge play for publisher Activision, which has agreed to a 10-year deal to publish multiple Destiny games over the course of the new console generation. Destiny is going to be one of the most expensive video game development and publishing projects of all time.

Having been built from the ground up, over a long period of time, with a talented team and a large war chest, it's difficult to imagine a bigger game in development right now. "We spent a lot of time — many, many years, in fact — working on Destiny," said Bungie chief operating officer Pete Parsons. "And I think it shows in the final game. It's just a world that I'd want to be in. It's a place that I want to spend time." 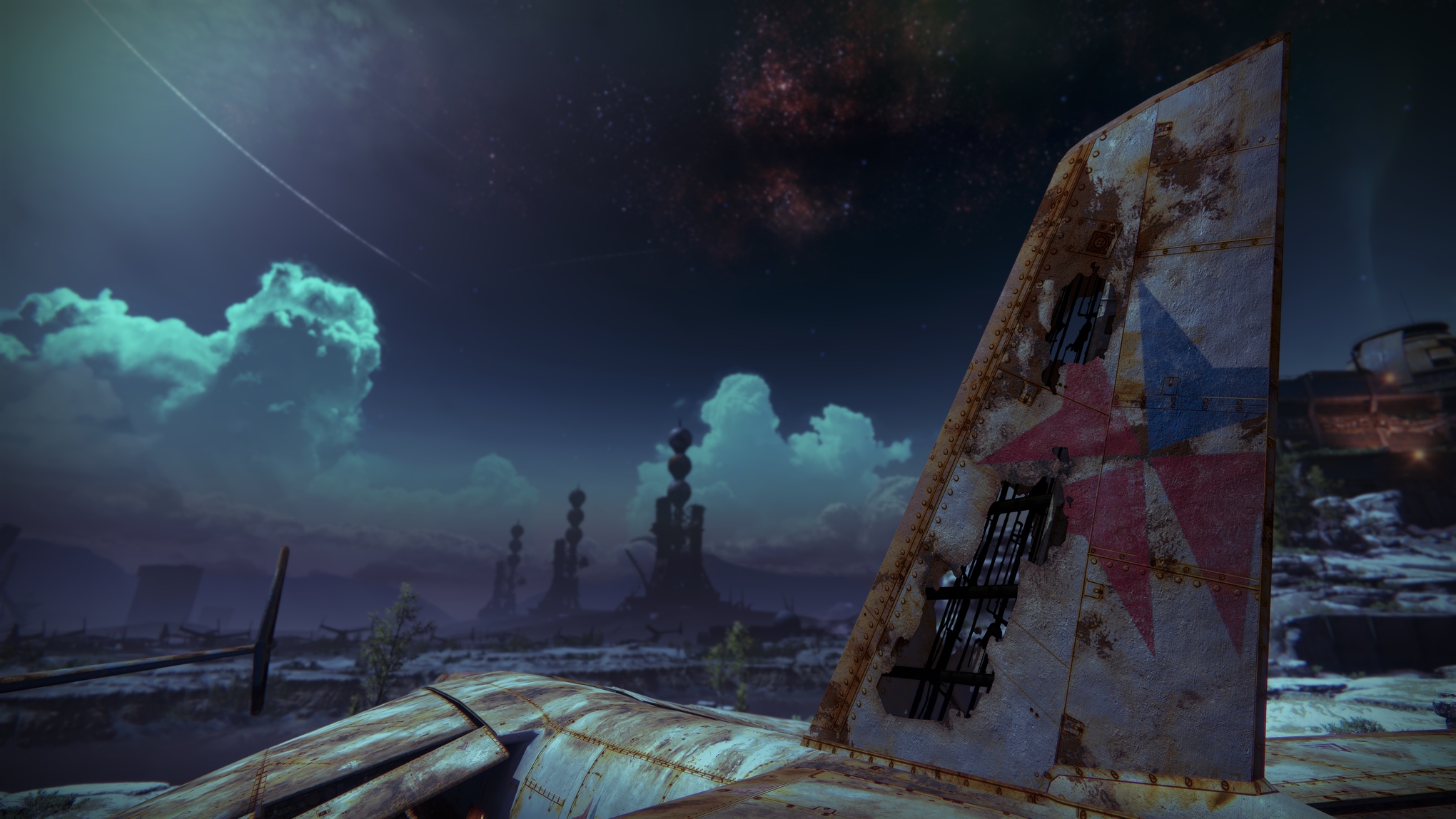 What do we know about the story?

Not much. Apart from the initial set-up, we have not yet been introduced to any in-game characters or specific quests. "The story for us is really one of discovery," said Osborne. "There's a lot of mystery involved in it, and we don't want to ruin that for the player. We're certainly gonna tell some stories as we get closer into launch, and get people rooted in some more context for the overall story arc, but we certainly want to preserve a lot of it for them to discover."

What platforms is it coming out on?

Release date is September 9 for PlayStation 3, PlayStation 4, Xbox 360 and Xbox One. No word yet on a Windows PC version, but that looks like an inevitability.

What do we know about the playable classes?

There are three races to choose from; Human, Exo and Awakened. "If you want to be a more aloof character, the emotional fantasy of the Awoken is more disconnected and more ethereal than the humans," explained investment lead Tyson Green. "The humans have more of a rugged, survivor feel. These are the people who survived the fall. Or there is this anti-emotional archetype, like the Exos, are meant to be the tireless war machine." 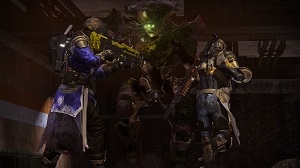 Within the races, there are three classes, Warlock, Hunter and Titan, which are fairly self-explanatory. Although they have distinctive looks and special weapons, there is a great deal of overlap in their upgrade paths. Your character can go in many different directions called "focuses." Unlike with many RPGs, in a multiplayer fight, there is no obvious penalty for teams that fail to diversify, although it is better to access a variety of weapons and skills, than not.

"Titans play differently than warlocks. Certainly they play different than hunters, and inside of each one of those classes is a focus," said Parsons. "So, people have multiple focuses that they ultimately will like and try and try again. Inside of those focuses, they have a tech tree that they can continue to tweak and adjust, and then the multiple weapons and gear that they get. You can continue to upgrade that gear with additional resources and change it the way that you want to play."

What about loot and upgrades?

From previews and our play-through, it's obvious that this game has a Borderlands-level obsession with loot and upgrades. All loot is personalized to you, so no fighting over the goodies, and no wasted rubbish that you can't use.

"We've been looking at other games for great ways to do systems," said design lead Lars Bakken. "But it's also looking at Dungeons & Dragons and things like that, which have been around for a long time. We've been learning how those types of systems have worked in the past and then taking the bits that are cool and that make sense, and also adding new things on top of them so it feels uniquely Destiny." 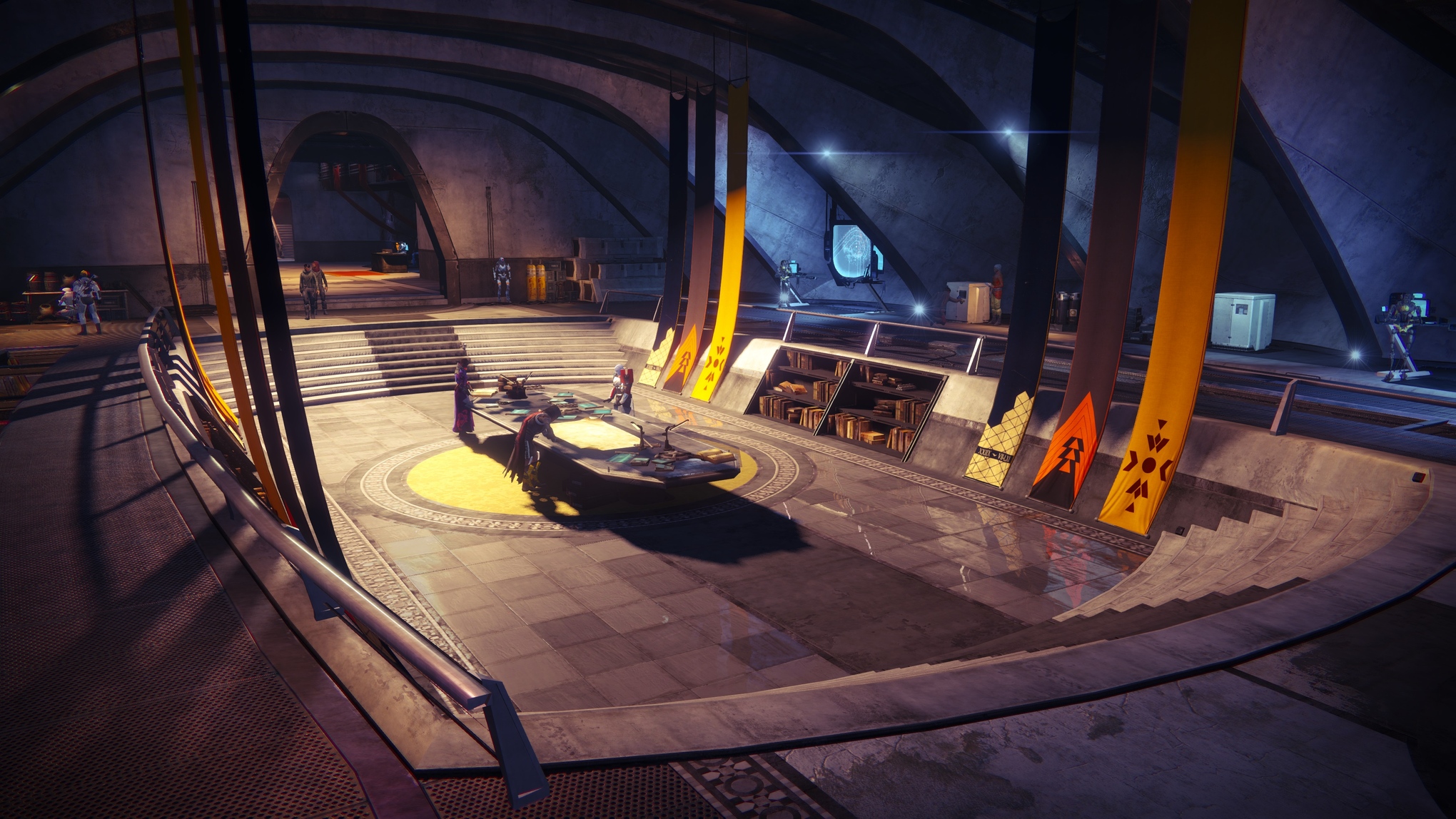 What do we know about the enemies and aliens?

There are various factions seeking to obliterate humanity. Not much is known about how they interact with one another, but we do know that they have distinct skills and personalities as well as hierarchies that bring some depth and variety to combat.

"We wanted to make sure that we came up with these archetypes that we felt comfortable with, that we could put right next to each other and would never confuse one from the other," said Jesse Van Dijk, lead concept artist. "By doing that, we ensured that the framework on which all of these races would be built contained enough variety that even at the end of the pipeline, when they're fully decked out in their final form, they're still different enough that you never confuse them. That took a significant amount of time to get right."

The Hive are zombie-like with a hint of royal aloofness. Cabal are tank-like militaristic units. Fallen are multi-armed insectoids. The Vex are metallic and like to operate horde-tactics.

"We are telling a lot of stories through the character design," said Osborne. "One really good example of that is the Fallen. So you've got a Fallen captain, who looks very noble and powerful and regal, and he's got this tattered cape that just tells of their heritage and their legacy. And then you look at a Dreg, who is this sort of subservient grunt with his arms docked off for some terrible penance that he must pay for a past transgression.

"The guns, the gear, the characters, the world, it's hugely important that we're able to have this sense of storytelling baked right into the world itself."

How big is this world?

About 20 locations have been mentioned during the pre-launch build-up for Destiny, either on Earth or dotted around former colonies on the Moon, Mars, Venus and elsewhere in the solar system. Each has its own look and feel, based on the location's function during the Golden Age and how much damage or amendments have been done by the aliens.

Certainly, the locations we have seen rely on a strong sense of familiarity. A Russian space station looks heavily inspired by 1950s space-race Soviet Union. The humans who were landscaping far away planets were driving standard automobiles; an odd societal choice.

"We want the world to be relatable," said Van Dijk. "It shouldn't be so abstract that you just have no idea what you're looking at. At the same time, we also want the world to be profoundly different from what we experience as normal. And then on top of that, we also want them [the planets] to be different from each other. Art-wise, it takes a while to figure that out. "

At the center of the world is the Tower, where players can hang out, meet and greet others, and generally show off.

"You see other people and you get an idea of what they have accomplished and what they're doing," said Green. "You'll get different ideas about how you want to make your character look. The Tower is an activity hub where you come to interact with other players. Your vault is there if you want to store equipment or change it over to other characters. This is an area where we're going to grow and learn what the community does over time. Do people play tag in the tower? Do people want to have more emotes in the tower? We're going to learn as we go."

From a navigation map we played with briefly, it's clear that Bungie has laid out a narrative timeline that is neither entirely rigid, nor completely free. It's designed much like an upgrade tree, with missions becoming available as the player gathers power and experience. 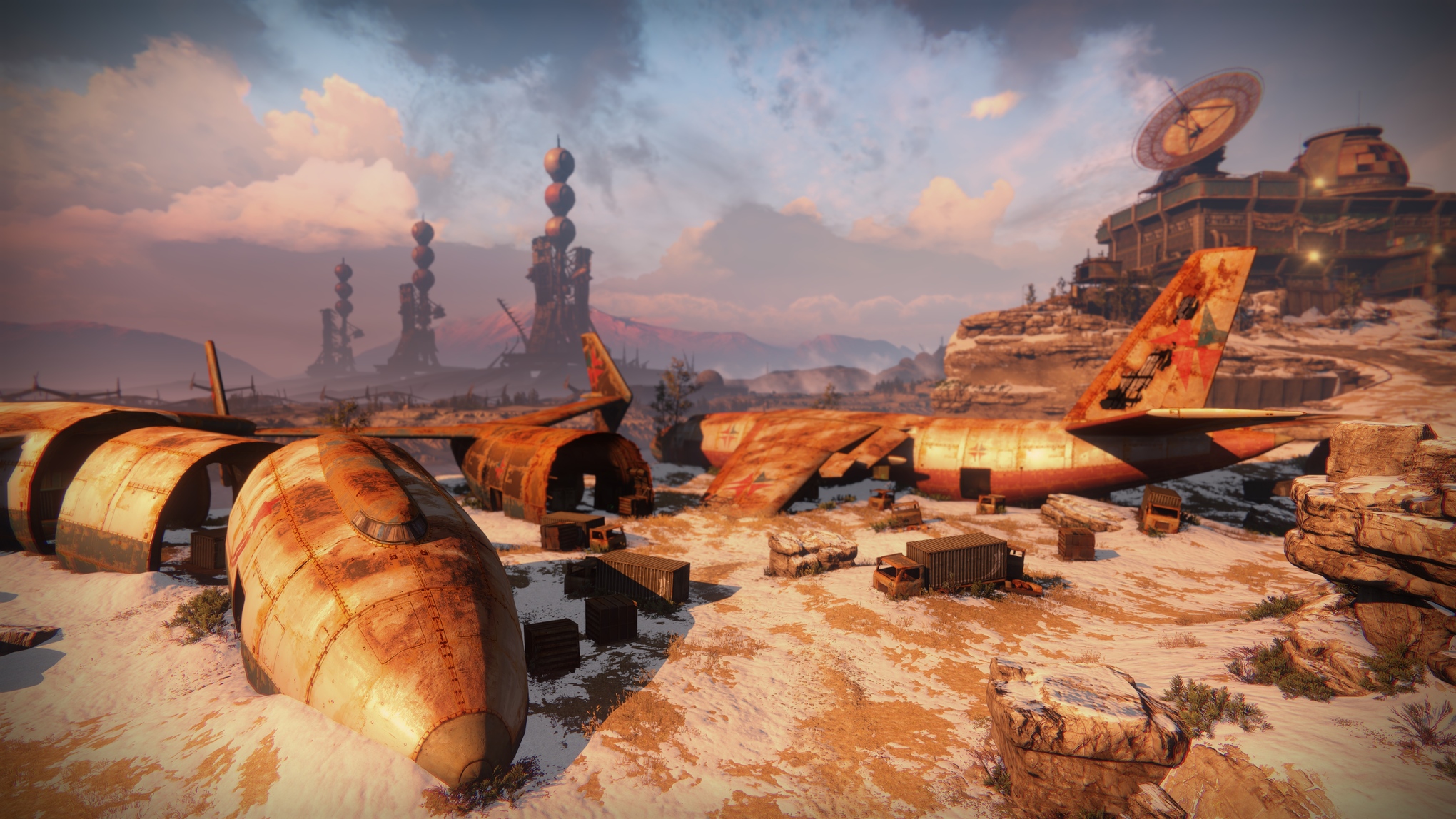 What about multiplayer modes?

Bungie has said almost nothing about how PvP works in this world, except that you will be bringing your character into these fights and your character will benefit from successes. But we don't know how fighting against other humans will work inside the game's story.

"I wish I could say a lot more," said Parsons. "I think it's gonna be a lot of fun. People are going to feel like it's incredibly fresh, and one thing I will say is, becoming legend in our game isn't just about the legends you become inside of the story. It's also inside of PvP, so you'll be able to bring those legends, your guardians, into PvP and the way that you've built them up."

On the other hand, Bungie has spoken a great deal about cooperative modes which are built into the game. Players join others inside the world and go off on missions and expeditions, like Strikes, which are designed specifically for three players, but which are a part of the campaign. That said, players who prefer to work their way through the story alone will be able to do so.

Public Events are instances in which large groups of players come together to take down a large enemy force and enjoy the booty. Bungie wants these events to capture a special sense of drama, in which players feel like they are engaging in unique experiences.

"Everybody still wants a great story," said Parsons. "But they do want to connect. We introduced, along with Halo 2, Bungie.net. That was a great place for players to connect when they weren't inside of the multiplayer experience. Players want more, and more and more of that, and that is, for us, why Destiny is our next logical step. That's the next big leap forward for us, is, how do we create a world where you can be a powerful character? You can be the center of the universe, you can experience part of a great story, and yet, be not just in what you would consider to be classic PvP, but all the time?"

Dune, Old, and every other new movie you can stream at home this weekend

Everyone in Dune poops their pants