Reaper of Souls is the latest example of developer Blizzard's willingness to change everything.

It's not like the developer has been ignoring Diablo 3 since the controversy of its launch in 2012, or its subsequent massive sales success. Just a few months later, Blizzard added the Paragon experience system and new player selectable difficulty tweaks along with regular patches. But Blizzard has been saving the biggest changes for Reaper of Souls, Diablo 3's first expansion.

Blizzard has a history of making major changes to their games in the wake of extensive player feedback, and Reaper of Souls is no exception. The much-maligned auction house? Gone. Difficulties? Completely changed. The Paragon system? Reset and applied account-wide to every character. There's hardly an aspect of Diablo 3 that Reaper of Souls doesn't change, all in the name of player satisfaction.

In fact Reaper of Souls adds so much content and so many changes to the existing game — much of which you don't actually have to pay for — that I found myself wondering if there might be such a thing as too much good stuff.

Diablo 3's post-cap experience system has been rebooted for Loot 2.0 and Reaper of Souls. The Paragon system now applies account wide — meaning every character regardless of their base level reaps the benefits of paragon experience. As you gain paragon levels, you assign a point in one of four categories. This adds small bonuses to higher level characters, but the real change can be felt with lower-level alts — the changed system makes it much easier to play new characters and level them up faster, and play more challenging difficulties sooner.

A major portion of Reaper of Souls' additions to Diablo 3 came in late February for free in the form of "Loot 2.0," a significant retooling of the game's underlying mechanics and systems. That patch was so-named for changes in Diablo 3's "drop-rate" — the rate at which items spawn in the world, and what kinds of items players will find. While Blizzard has previously tweaked Diablo 3's item drops in response to player input, Loot 2.0 dramatically increases the amount of magic, rare and the most-coveted legendary and set items found in chests and through conquering monsters in-game.

Players will also more often find items specifically tailored to the character class they're using when they find that gear — demon hunters will find weapons and accessories that often has bonuses to their unique skills, as will barbarians, witch doctors and the rest. 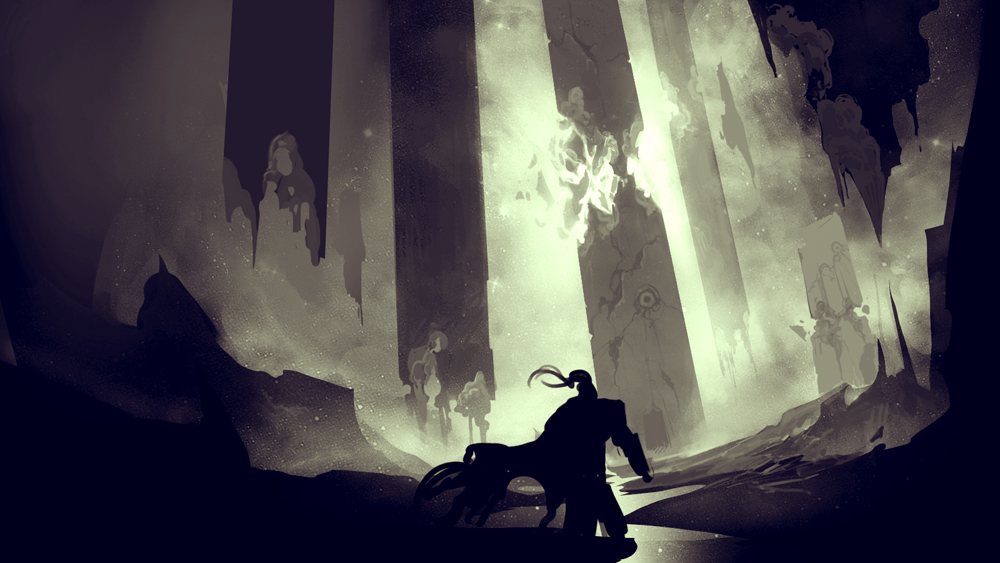 This change alone adds a more consistent reward loop, and players who have invested dozens of hours in search of powerful weapons and armor pre-Reaper of Souls won't be able to hide behind their existing tools. Mirroring Blizzard's moves in World of Warcraft and its many expansions over the last ten years, all pre-patch gear is now obsolete. Within an hour of play, my level sixty demon hunter was dealing — without exaggeration — a thousand percent more damage per second than I had been previously.

This drastic renovation of Diablo 3's item economy pairs with a complete revising of every character class's skill tree. Several skills have been replaced entirely. Others have been moved from secondary, limited use to so-called primary skills that serve as main attacks that can be used endlessly. The rune modifiers you unlock to tweak your skills have also seen considerable changes and rebalancing.

From a thousand feet up, Diablo 3 resembles Diablo Past, more or less. It's still a game defined almost entirely by clicking on things — you click on the ground to move your character to that point, you click on items to pick them up, you click on enemies to make them dead. Enemies yield randomly generated loot. Loot, more than levels or character progression, remains the beating heart of Diablo 3.

While all of this is familiar, Diablo 3 quickly makes scandalous departures from previous games. Skill points and attributes are out. Instead, each class's attributes increase automatically when a new level is gained, and new skills unlock over time at specific levels.

Potions are a thing of the past — replaced by one-time health globe pickups dropped by downed enemies. Town portal scrolls? Gone. Magic weapons already have their properties laid bare. Rare and unique items merely require casting time to identify, rather than a depletable resource.

In some ways, these moves are reminiscent of the basic philosophies that seemed to drive Diablo 3 back in 2012 — to make for a more active game, with less trips back and forth to sell items, less potion management, more combat etc. But Reaper of Souls' changes to the basics of Diablo 3 make for a more accelerated arms race.

The other side of Diablo's eternal conflict hasn't gone unchanged either — elite mobs and boss characters have seen a change in the ways that they do damage and the minions they appear with, and the tendency of bosses toward one-shot kill attacks and combinations seems less prevalent than they once were. At least, that is, until Act 5.

While all that I've just discussed is now a part of Diablo 3 with or without buying Reaper of Souls, Blizzard isn't giving away everything. 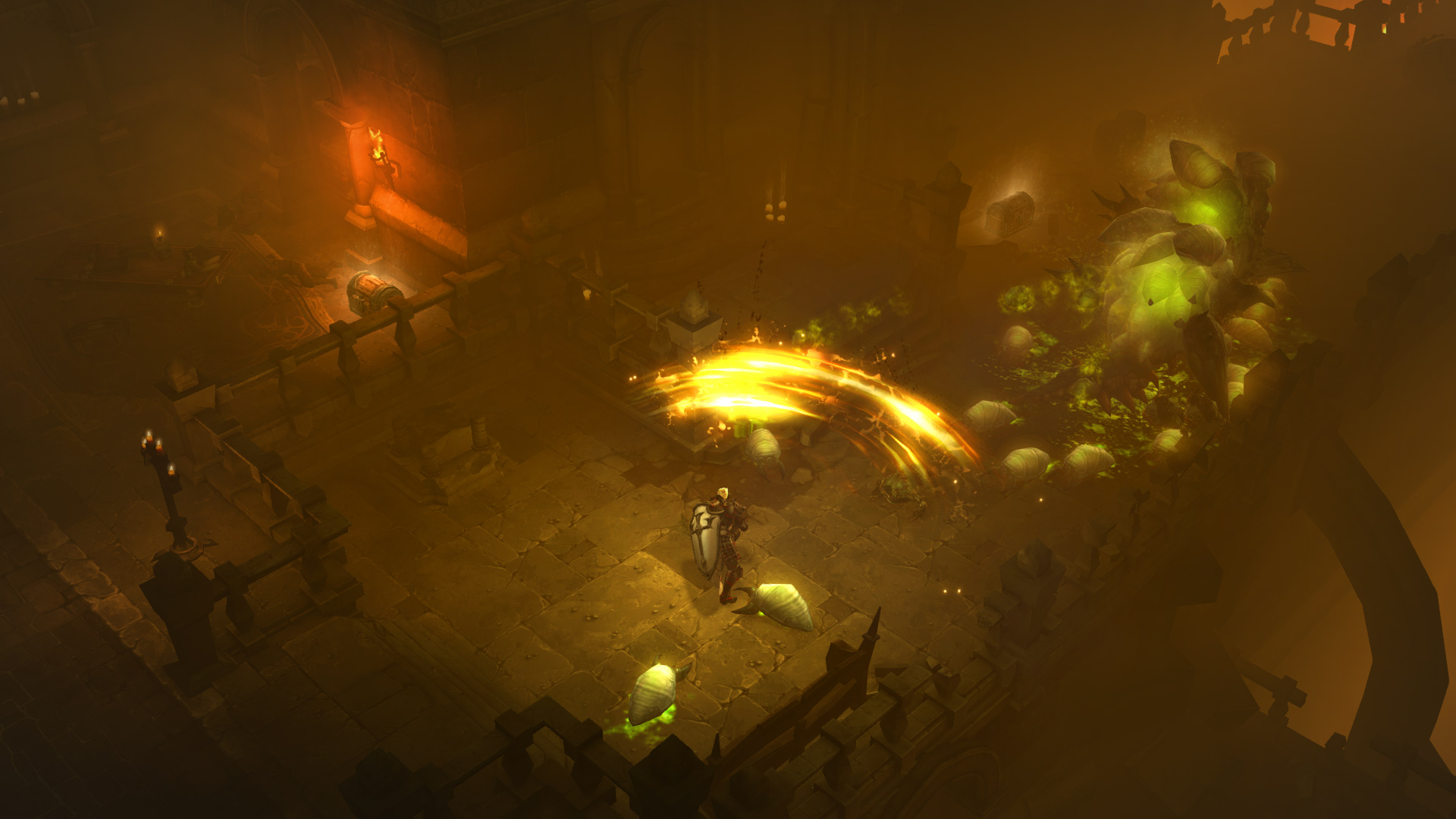 Reaper of Souls continues Diablo 3's story with a new act set in Westmarch, as the angel Malthael enacts a plan to permanently end the war of souls that's acted as a fictional backdrop for the series as a whole. The story here is a little less cliched than the main game, and also manages to work in a good amount of new backstory and character development for major characters and every player selectable class.

This includes the Crusader, a new class capable of dealing huge amounts of damage and taking even more. But every class gets more cool stuff via Reaper of Souls, with an increased level cap at 70 and new active and passive abilities. There's a consistent theme in these new abilities, almost all of which are focused on damage, and lots of it.

The result of all these system changes and tweaks is a more immediately gratifying game. Where Diablo 3's fights and progression were a great modernization of the action RPG formula, Reaper of Souls makes it looks measured and austere in comparison. It's all about more: more gold, more loot, more action, more monsters, and all right now.

The auction house — real-money and otherwise — is gone from Diablo 3 entirely. But Blizzard hasn't stopped there. The entire in-game economy has been sealed more tightly as legendary and set items are now account-bound, preventing ad-hoc item selling and trading between players almost entirely. The loophole? You can trade legendaries and set items for a short time with players who were in your game when you found them. Along with the increased amounts of gold and items that drop in co-op, this incentivizes multiplayer in Reaper of Souls and Diablo 3 even more. 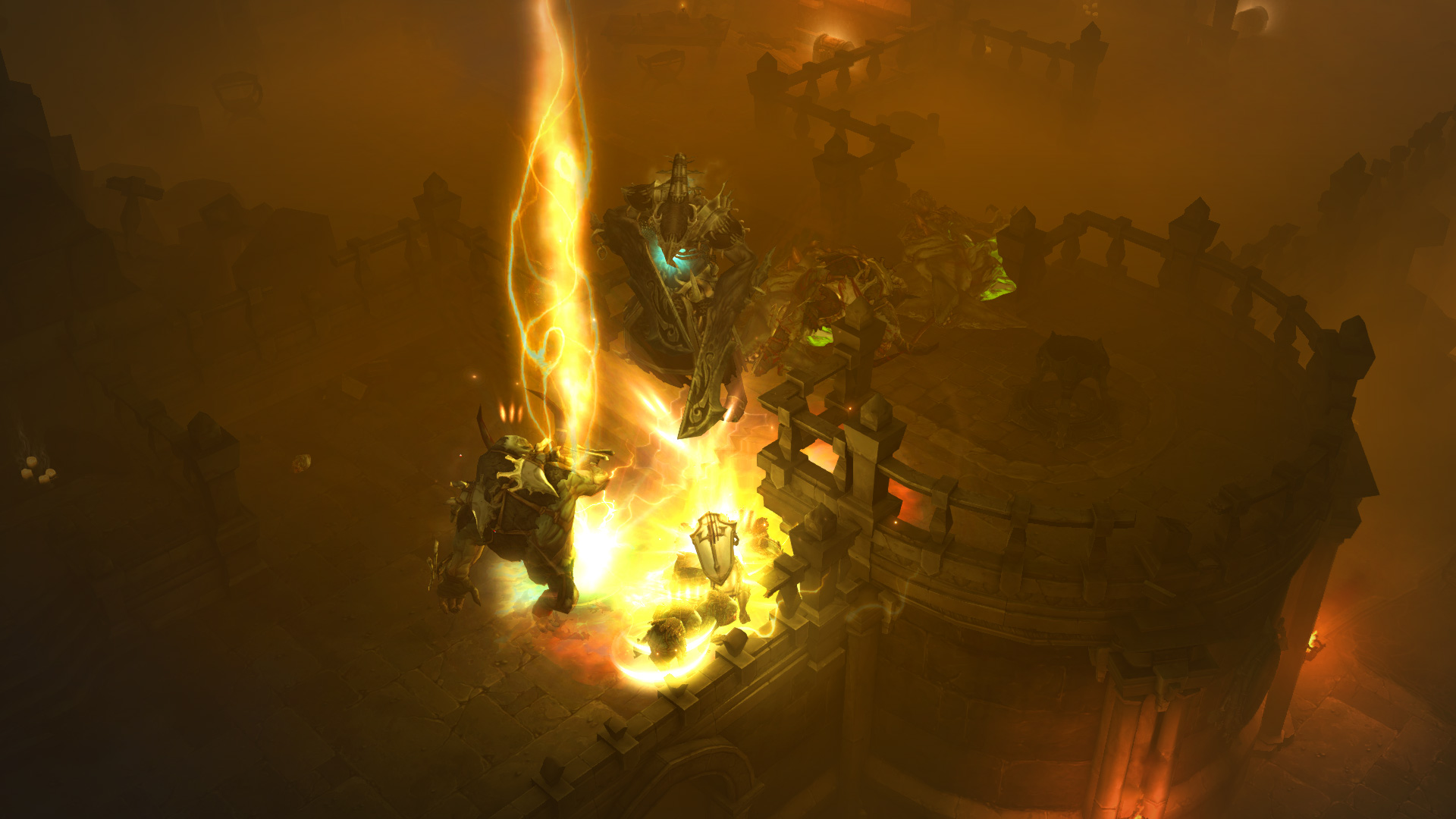 Reaper of Souls focus on near-instant gratification is most obvious in its new craftsperson, the Mystic. The mystic allows you to "re-roll" a specific attribute of any item, assuming you've got the necessary materials. For more particular players, the mystic will also change the appearance of any item, transmogrifying its appearance to that of another item of the same type that you've found — again, assuming you can pay the price.

The new Adventure mode is the purest distillation of this idea. In adventure mode, the story and narrative objectives are gone, replaced by bounties spread across the world of Sanctuary. Unlocked once you complete act five, adventure mode takes the unofficial end-game idea of boss rushes, mission runs, and loot grinds that players have applied to Diablo 3 since release and codifies it.

In particular, adventure mode is a great mode for co-op players — it's easy to pick the kind of missions you want to run without waiting to get to specific parts in the main campaign. And the Nephalem Rifts you earn the right to open by completing bounties are the ultimate combat crucibles for larger groups. In this way, Reaper of Souls seems even more tailored to cooperative play than it was before, which is aided by the redone difficulty system. Normal, Nightmare, Hell and Inferno have been replaced by Normal, Hard, Expert, Master and six tiers of Torment difficulty — each of which scale to the character levels in a game.

All of this adds up to a game that feels newly, relentlessly playable, even after I clocked 100 hours plus in the game before between platforms. Where I had previously had my fill of the game for a while, Reaper of Souls has successfully pulled me in, making me interested in playing every class for the first time since the pre-release beta.

My only concern after spending an additional 30 hours with Reaper of Souls is fatigue. It's easier to lose hours and hours of time in Reaper of Souls' loop, but I found I needed longer breaks between sessions than I did in Diablo 3 back in 2012. There's so much going on at all times now, so many explosions and flashing lights, so many magic items, so many crafting decisions, so many different objectives that I sometimes felt a little overwhelmed. The experience can sometimes feel too rich, like eating dessert for dinner — and that makes me wonder how Blizzard's desire to give players everything they've always said they wanted will pan out a hundred hours of playtime from now.

Of course, most developers would commit crimes to have players ask that kind of question of their games. Reaper of Souls is a Blizzard expansion through and through, an example of the developer's willingness to re-examine every decision to make a game that old players can find new again, and new players can get into just as easily. Even after giving away big pieces of its best changes for free, Reaper of Souls demonstrates the kind of add-on that makes other expansions seem stingy by comparison, reinvigorating an already great game.

Reaper of Souls was reviewed using a retail code purchased by Polygon staff. You can find more information about Polygon's ethics policy here.