Kinect Sports Rivals is too loose and inconsistent

Kinect Sports Rivals emphasizes character and story — a novel idea for a motion-based sports game, but one that developer Rare commits to completely.

Story isn't the real draw, though. The well-designed events and core progression system pulled me into Kinect Sports Rivals. The exciting selection of activities and goofy arcade theme suit the "extreme" vibe of the game. But the Kinect controls themselves — along with lengthy load times and grating characters — eventually drove me away.

Kinect Sports Rivals starts with the creation of a champion, with a scanning process that resulted in an avatar that actually looked like me. It's impressive tech — and a first taste of the game's crisp visuals. Then I was off to train with "Coach" — a combination drill sergeant and high school football coach — in each event, before the game let me loose into story mode. This framework exists primarily as an introduction to the sports that make up the core of the game: tennis, rock climbing, bowling, wave racing (here called wake racing), target shooting and soccer.

Each sport is designed as a simpler approximation of the real-life activity. In soccer, for example, you complete time-based kicks on offense, and "catch" the ball to make saves on defense. Everything is controlled via Kinect, with an emphasis on big movements — jumps, kicks, throws, etc. Power-ups add a bit of spice to each event — stuff like powerful shots in tennis, speed boosts in wake racing, etc, all of which work on a cooldown timer. It's a simple formula, but it works on the design level. 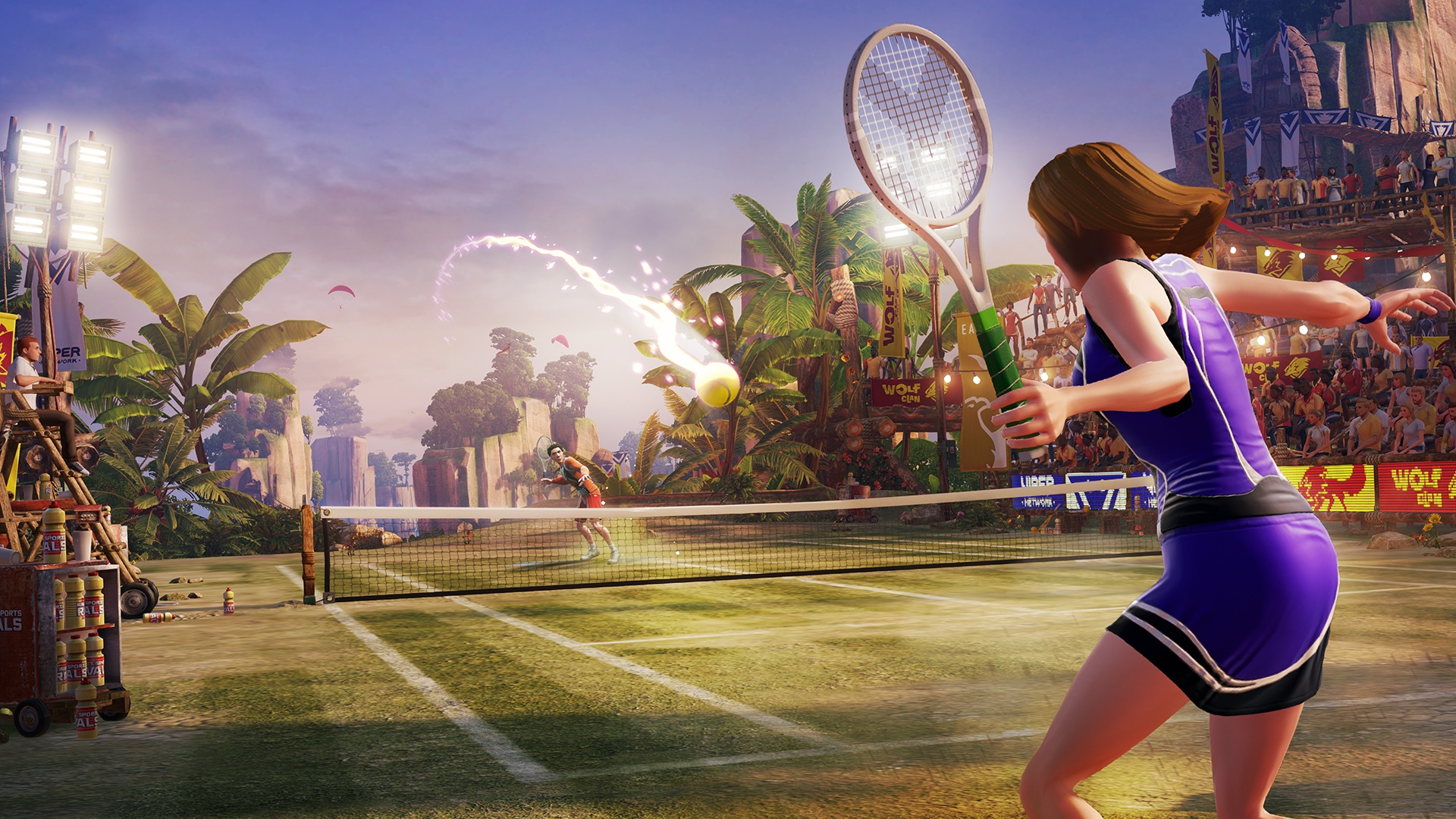 As you play and improve, you earn XP in every event, garner "fans" for pleasing crowds with big moves, and earn money to buy outfits and power-ups. I appreciated the sense of progression, especially when I got stuck in a story event and needed to basically grind. Even if I failed a couple of events, I didn't feel like I was wasting my time; at least I was getting XP. This tied into the fiction as well — as an up-and-coming athlete, I was making my way, progressing in my mastery of each sport.

In an inversion of the usual playground politics of getting picked last, the player is courted by three rival teams looking to add a champion to their rosters. On paper, that's a cool idea. I liked the concept of that story better than Kinect Sports Rivals' execution. It ties into a particular power fantasy (being a superstar athlete) that I would totally dig, if it weren't ruined by an overblown cast. The characters courting you are exaggerated, loud extreme sports star knockoffs. They feel like they were written to entertain rambunctious children, which is just as well — but they have zero universal appeal.

The characters have zero universal appeal

This story content can't be ignored, which is Kinect Sports Rivals' biggest misstep. Cutscenes are plentiful and unskippable, with the same boring buffoons over and over again. The coach character is the worst offender — and I had to listen to his shrill routine more than anyone else throughout the game. 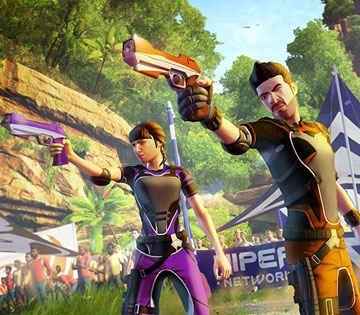 An example of his wit, during the mandatory training for tennis events: "You're about to get court-martialed — on the the tennis court!" Later, I had to listen to him repeat the same six phrases over and over while I tried wake racing. He talked over himself so much that I couldn't hear the sound effects from the race itself. The rival team's captains aren't much better.

Long loading times compounded my annoyance. I often found myself pacing around the room while the game took about a minute to load a cutscene. Then, after about a minute of dopey dialogue in the scene itself, another minute or so passed to load the event's "pre-roll" cutscene, and the actual activity. All the downtime killed the momentum of the game. 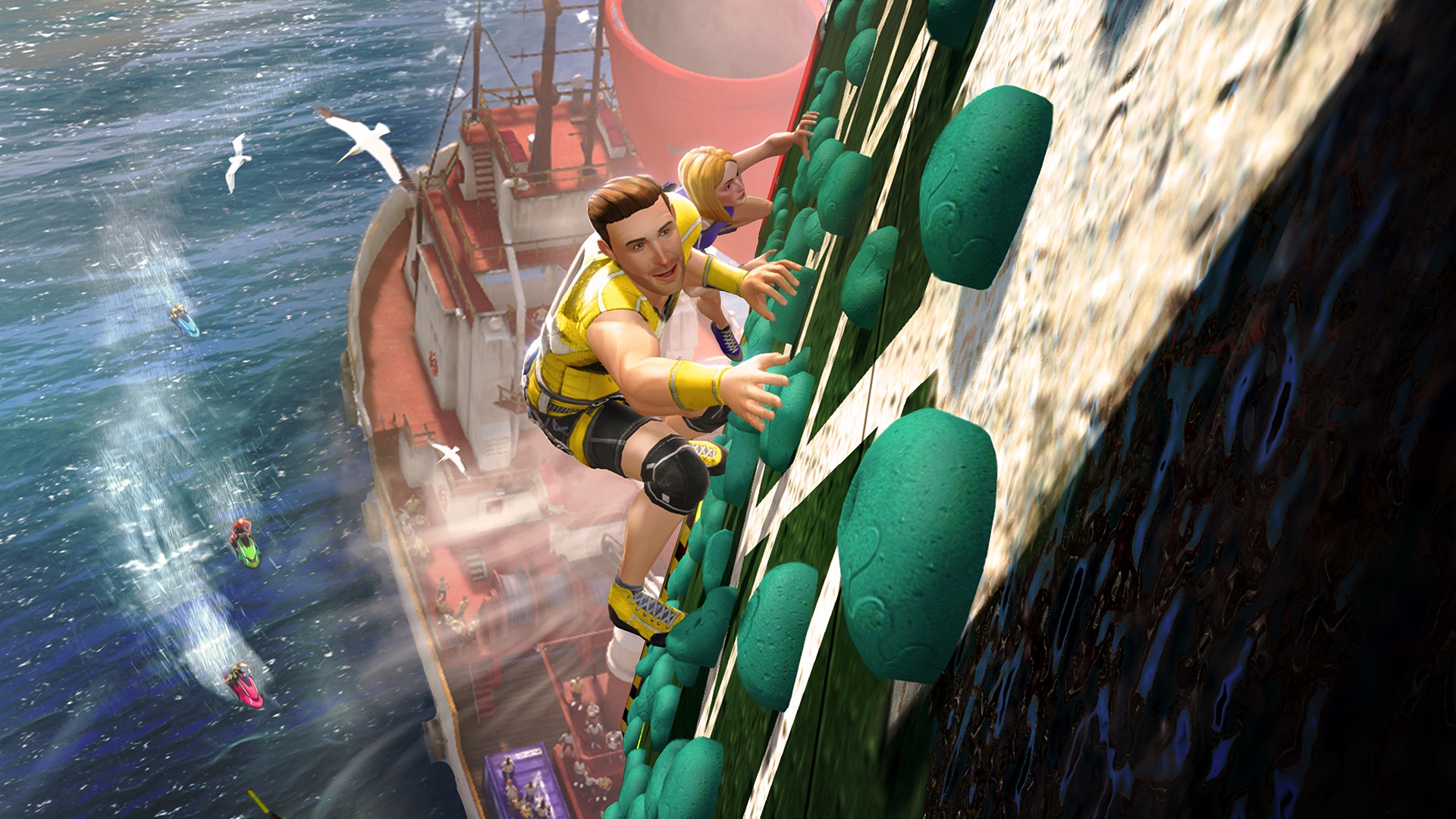 Kinect Sports Rivals features a social hub, the main draw of which is a series of daily or weekly challenges, dedicated to making players want to stick around. None of the challenges was available to compete in as of this writing, but a steady supply of content could go a long way in adding to the game's longevity. However, it cannot fix the iffy controls that lie at the core of the game's problems.

The activities themselves are worthwhile — when they work. About nine times out of 10, my movements were read correctly. But that one out of 10 was enough to sour me on the experience. This happens in some events more than others. Many of my soccer saves were missed by incorrect reads, as were plenty of returns in tennis. Wake racing was the most inconsistent — some runs felt smooth, while others had me crashing into walls when I was steering in the opposite direction. These high-energy exercises focus on the showiest and most exciting aspects of their respective sports, but all of that energy went into screaming at the Kinect when things went screwy.

When it worked, getting the timing right and scoring a goal in soccer was exhilarating. But I wanted to throw my Kinect out the window every time my arm mysteriously bent akimbo instead of making a crucial save. Even after I recalibrated my Kinect multiple times and rearranged most of the furniture in my apartment to get the best results, I encountered the same problems over and over.

Kinect Sports Rivals is too loose and inconsistent

I went into Kinect Sports Rivals with the mindset of an over-active kid. I wanted to jump around the room, enjoy the goofy vibe and pretend to be a badass athlete. Kinect Sports Rivals feels like it's halfway there. But I spent too much time fighting the game, rather than feeling empowered by it, and the game's inconsistent controls and eye-rolling dialogue kill its momentum.

About Polygon's Reviews
6 xbox one