Everything in Yaiba: Ninja Gaiden Z shoves the player away.

Yaiba: Ninja Gaiden Z has no real reason to exist.

Every game needs to give the player a reason to continue. The combat may be satisfying, or perhaps the story ropes you in. It could be that the sense of exploration or discovery is enough to keep you in front of the screen. There has to be something the game provides the player, some sense of fulfillment that gives you an excuse to keep playing.

Yaiba: Ninja Gaiden Z offers no such reward; everything in the game's design and execution pushes the player away. The story is nonsensical. The characters are one-dimensional and off-putting. The combat is frustrating. The checkpoints are few and far between. The camera fights you as often as the enemies. The controls are a mushy, lumpy mess.

The only emotion I felt upon completing the game was a sort of tired relief at not having to continue.

Ninja Gaiden Z begins with the slightly interesting idea of giving the player control of a stereotypical bad guy. After being sliced in two by Ninja Gaiden protagonist Ryu Hayabusa, Yaiba, our "hero," is stitched up and turned into a cyborg. His one goal: finding and killing Hayabusa.

This isn't a terrible premise, but the game does nothing with it. It simply throws "jokes" and casual sexism at the player hoping that your id will be massaged enough that you'll forget how god-awful the action feels. There is no commentary included with the sexual references or other attempts at humor; the idea is that these are bad men, so they're given a free pass to be terrible.

Zombies provide fodder, and you'll cut through them in great bloody swaths, delivering execution moves to regain health. Yaiba tries to find the sort of rhythmic flow where you lose yourself in carefully planned button presses and well-honed combos, but the controls only take you halfway to that point, and the animations aren't fluid enough to pull it off. The game also fails at the underappreciated art of enemy placement; good designers can make you feel powerful by perfecting how enemies attack, and from what position. Yaiba offers no such design, opting instead to just throw hordes of zombies in seemingly random piles while the fixed camera struggles to keep everything in frame. The game mistakes overwhelming the player with offering them a challenge.

I often fought through waves and waves of enemies only to be killed by a cheap shot from a zombie clown or a fire-breathing zombie. These unexpected deaths were as often as not followed by the realization that there was no checkpoint during the whole slog of a battle. I simply had to start over from the first wave and do it all again. 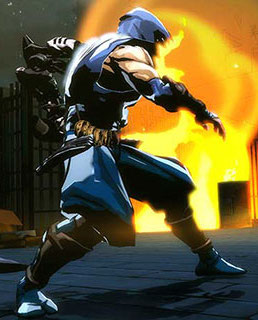 Each enemy in Yaiba has a sort of elemental power that interacts with others to create environmental effects, and it's easy to get lost in the chaos and die because of a chain reaction. The idea of using enemies against each other is interesting, as you can sometimes clear out a wave of bad guys by dodging away and allowing their attacks to land on each other, but the level design just isn't up to the task of turning this idea into something enjoyable.

The game's rhythm and difficulty seemed almost purposefully broken. There was a boss battle two-thirds of the way in the game that was so frustrating, and broke so many of the game's rules I had learned to count on, that I restarted the entirety of the game on easy. The final boss took me around 30 minutes per attempt, and of course there are no checkpoints as you fight across his multiple forms. Almost every enemy encounter is frustrating, but whatever relief I felt at having beaten one evaporated when I found out I had to fight two of them in the next chapter. Or three. Or a combination of two different swarms of them.

None of these enemies are appealing nor fun to fight. They kept coming until I was cursing under my breath at each encounter. There were moments I had to walk away from the laptop in frustration, but there was no rush of accomplishment when I finally made it past these obstacles. There was only dread at the knowledge that something equally frustrating was likely around the corner.

The only reason I continued playing after resetting the game to Easy was that it was my job to finish the game. My will was broken like a wave on the beach; the game's design consistently felt punitive.

Even the game's story and characters seem designed to push the player away. There is a character written and acted in such a way that makes it clear the developer substituted cartoonishly large breasts for personality, and the game makes sure they're in every frame. There is a scene where a bus flies between a pair of spread legs, and that's the joke. It's like intercourse, but it's a bus! Get it?

everything in Yaiba: Ninja Gaiden Z shoves the player away

Yaiba works only in the sense that it didn't crash, and the menus were easy to navigate. Past that mild technical achievement there's no reason for anyone to play it. Every aspect of the game stumbles in its execution — everything from the controls to the camera and everything in between offers frustration, not joy. Yaiba serves no purpose.